A unique trip focusing on Cantabrian Brown Bears and Iberian Wolves in Northern Spain.  Observations of the Wolves are more or less guaranteed as we will focus on  areas where wolf cubs born earlier in the year  meet up with  the alpha couple and other members of the pack in the mornings and evenings. As bears need vast amounts of food in order to amass a thick layer of fat which will get them through the winter, they feed nonstop on everything they can find: blueberries, hazelnuts, chestnuts and acorns. Therefore, we will be targeting some hilly mountain slopes and meadows where this natural Bear food is abundant.

The first part of the trip will take place inside the boundaries of the Sierra de la Culebra and Picos de Europa National Parks. Our aim is to view wolf packs where they do not feel disturbed or threatened. Highlights at both the sierras of Culebra and Picos de Europa will be observing the resident wolf packs that roam the remote valleys and mountainsides in the vicinity of their dens which were located earlier in the year. For the Bears, we will head to the magnificent Somiedo National Park as well as areas near the towns of Cangas del Narcea and Villablino.

A lot more to see in these biodiverse areas

While waiting and scanning for Wolves and Bears there will be ample opportunity to watch other interesting mammals such as Cantabrian Chamois, Wild Boar, Otter and Wild Cat. Plus being in bird rich areas we will be visiting areas during the day to observe bird species such as: Great and Little Bustard, Black-bellied Sandgrouse, Black Stork, Black-shouldered Kite, Golden Eagle, Little Owl, Egyptian, Black and Griffon Vultures and Rock Sparrow. 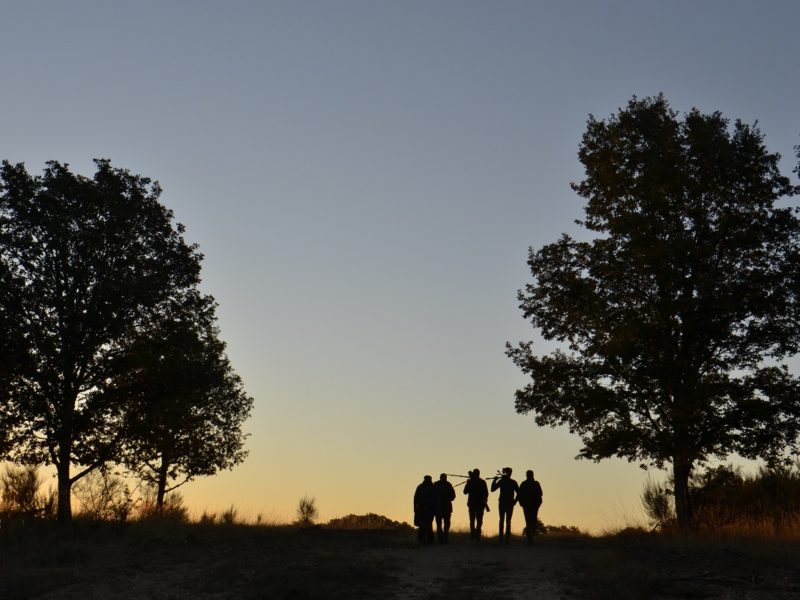 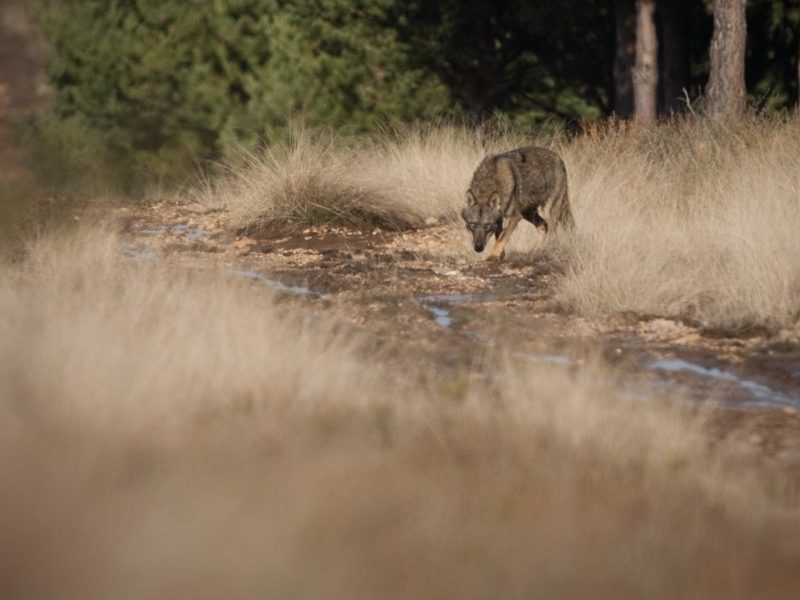 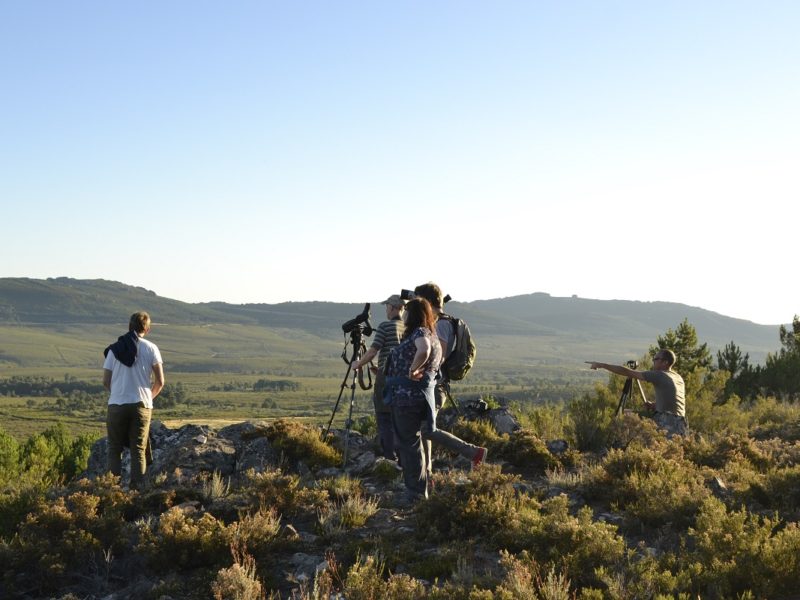 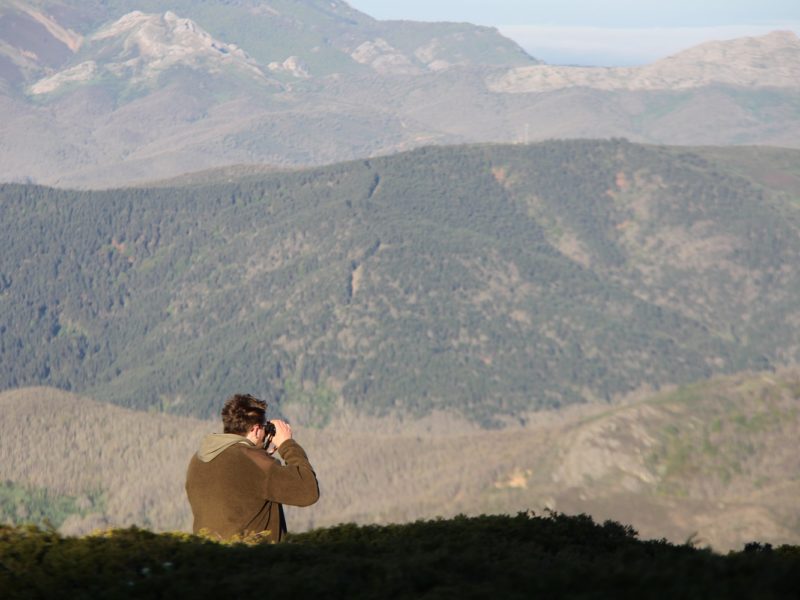 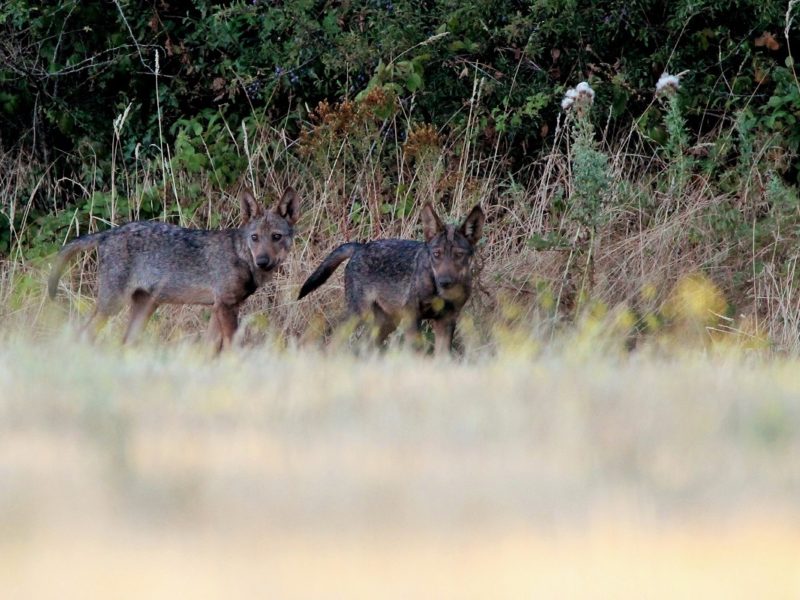 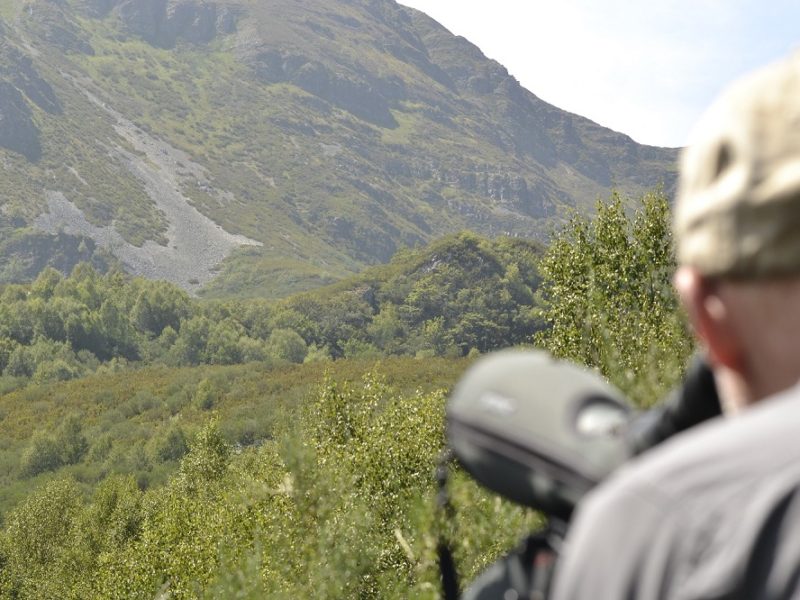 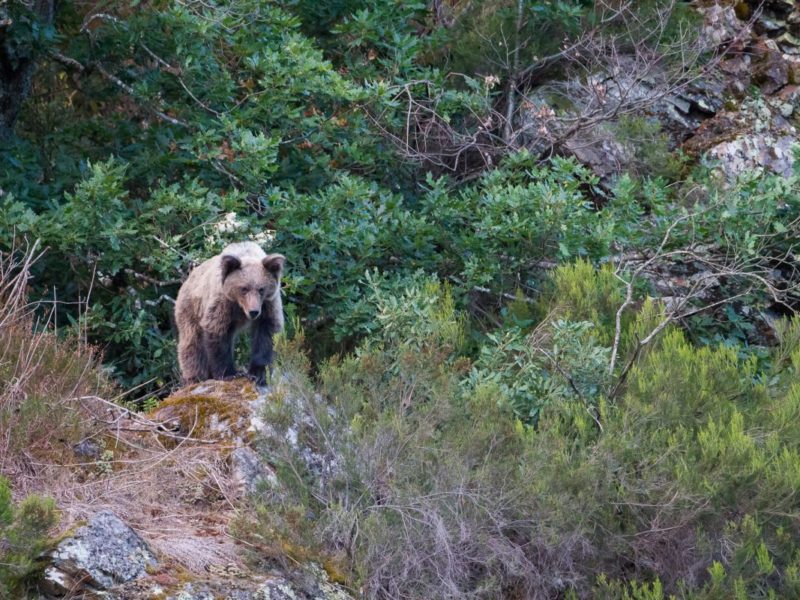 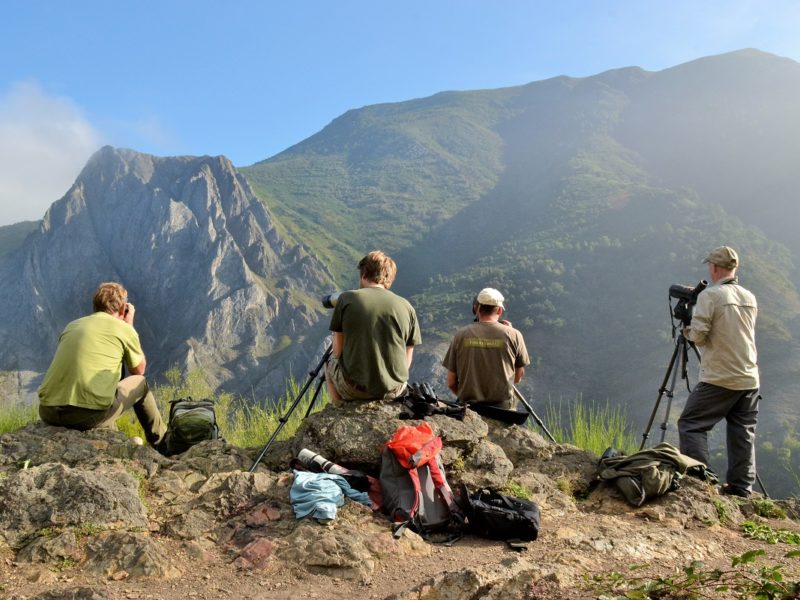 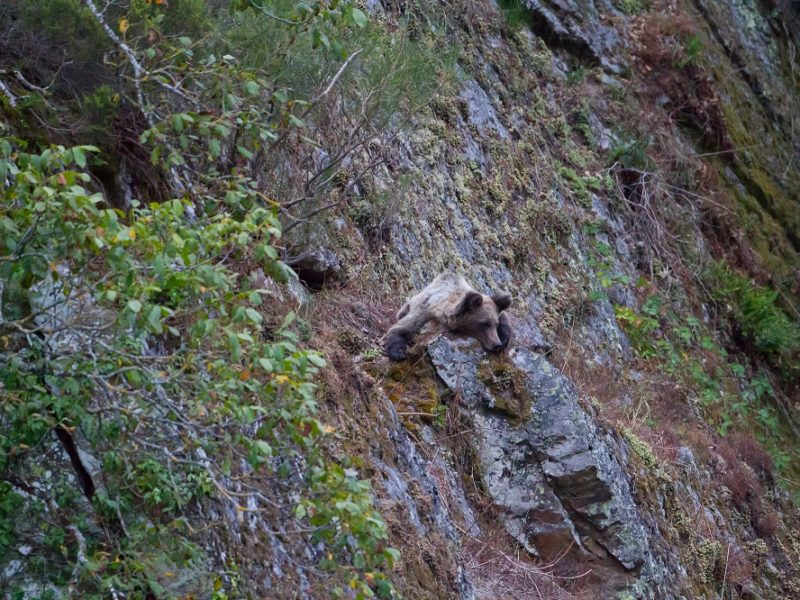 In general, views of wolves and bears are made from mid to long range so telescopes are required for the best views and to observe the natural behaviour of the animals without disturbing them. Although, being a very exciting and intense experience to see wolves and bears, patience is required whilst scanning the terrain. In the Picos our service includes the use of an all terrain vehicle giving access to the remote vantage points in the middle of the mountains, sometimes exceeding a height of 400 – 500 metres. Not possible without using a 4WD vehicle. Overnight we will stay in very nice and comfortable local hotels.

The Iberian wolf is considered by some scientist as a sub-species (Canis lupus signatus) of Canis lupus, though this is rejected by many. Whatever their status, they have unique and distinctive markings that can be seen in the field – they are black along the tail, back, jowls and front legs. There given Latin name sigantus means ‘marked’. More than 50 % of the Spanish population of wolves are found in Northern Castilla y León (1000-1.500 individuals), less than 35% in Galicia (500-700), with the densest population in North-eastern Zamora (5-7 wolves/100km2). Recently they have managed to cross back over the natural barrier of the River Duero and begun to spread southwards and eastwards. Although still rare Iberian Wolves are not now considered to be endangered. The main reason for the increase in numbers is the migration of people from the country to the towns over recent decades. This depopulation has led to the regeneration of natural vegetation in former agricultural areas. The immensity and emptiness of the landscape, for example in Sierra Culebra where this tour starts, results in a rich and varied local fauna with a huge increase in wolf prey species such as Roe Deer, Red Deer and Wild Boar. It is however still legal to hunt wolves in most parts of Spain. For most of the wolves range the law states that wolves must be respected as long as they do not come into conflict with humans; a difficult argument leading to endless discussions between hunters and wildlife enthusiasts and conservationist, especially as, despite the law, indiscriminate hunting of wolves takes place in most areas. 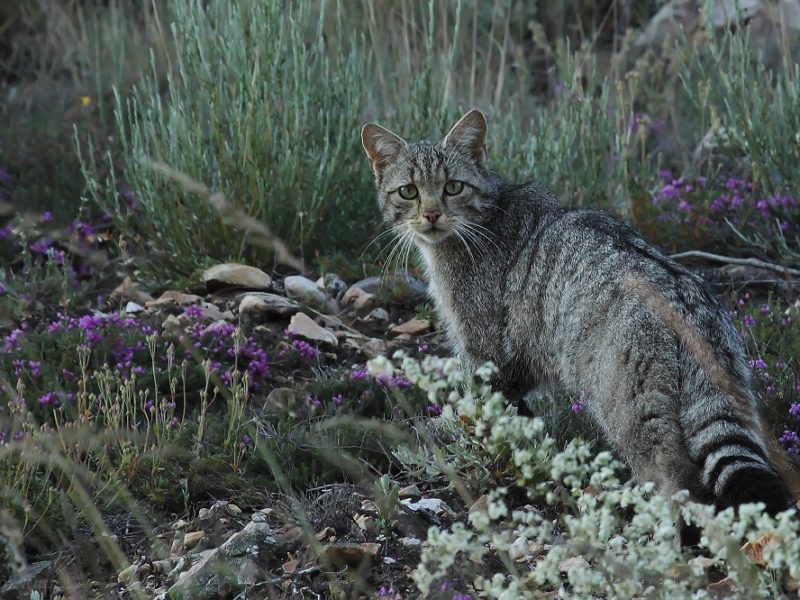 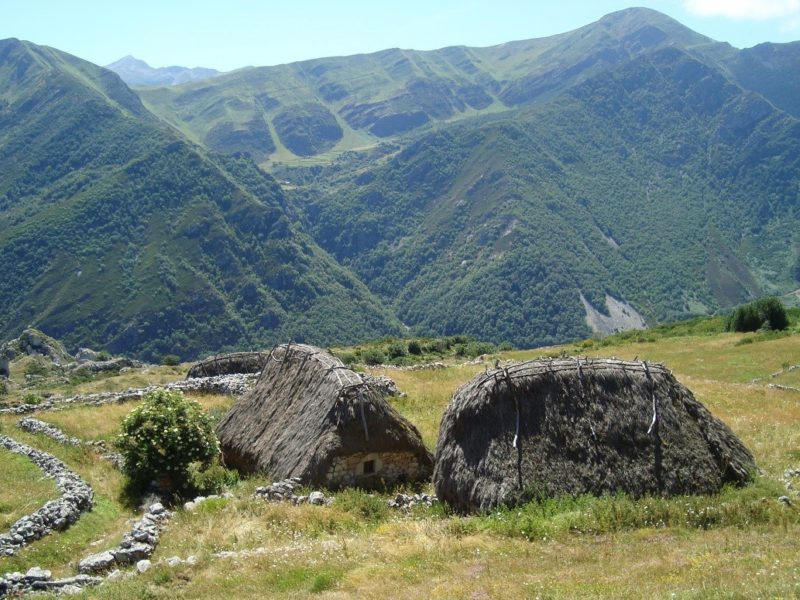 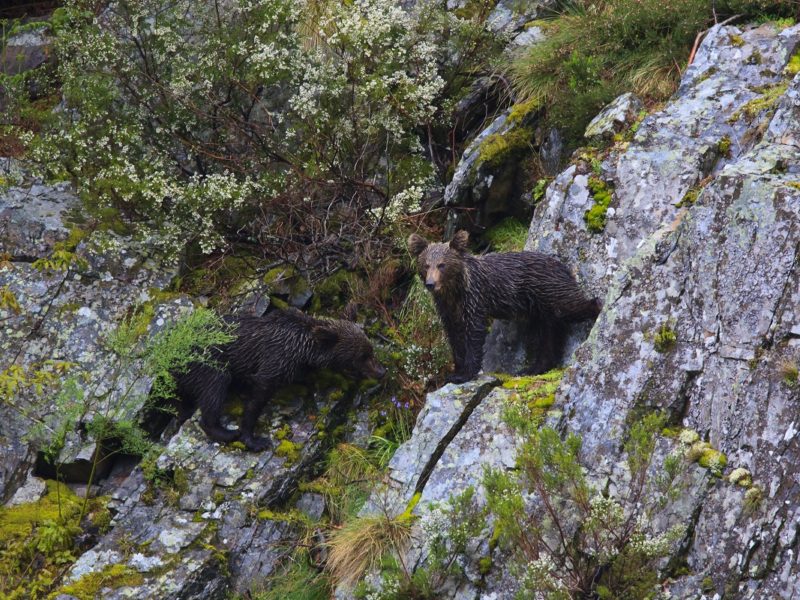 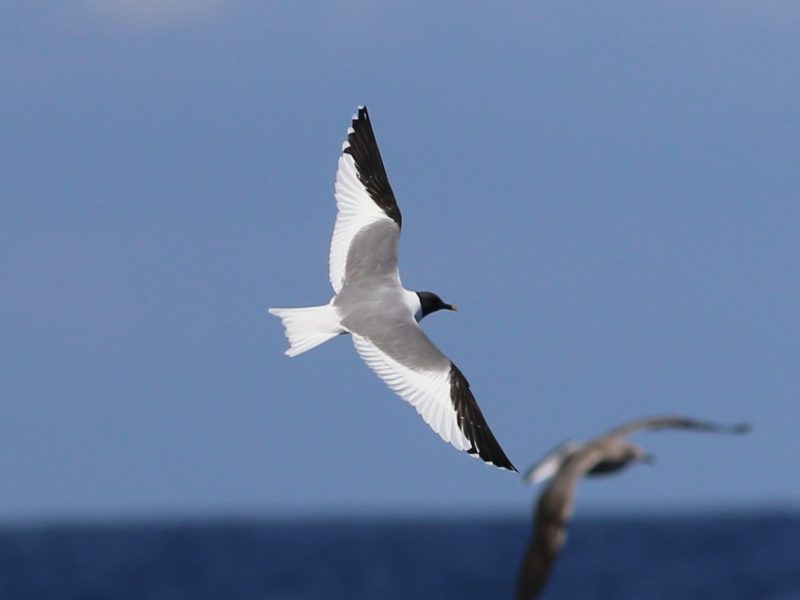 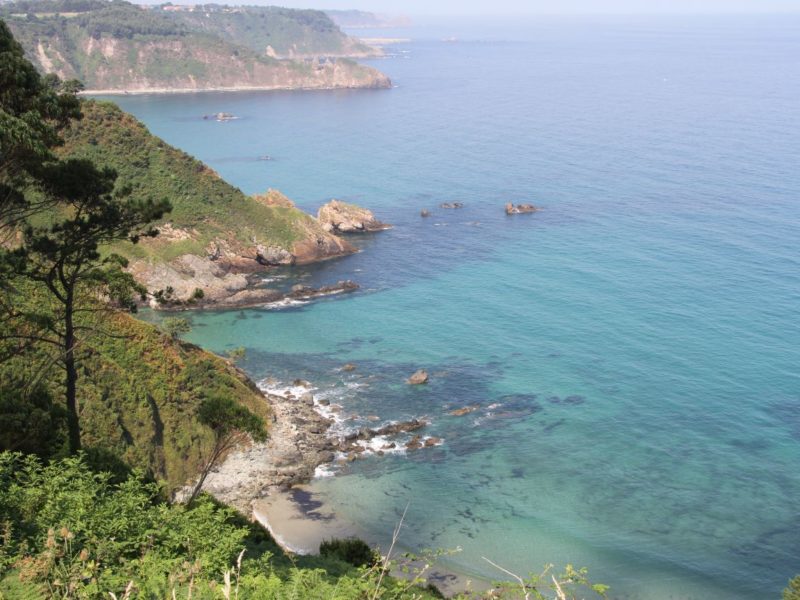 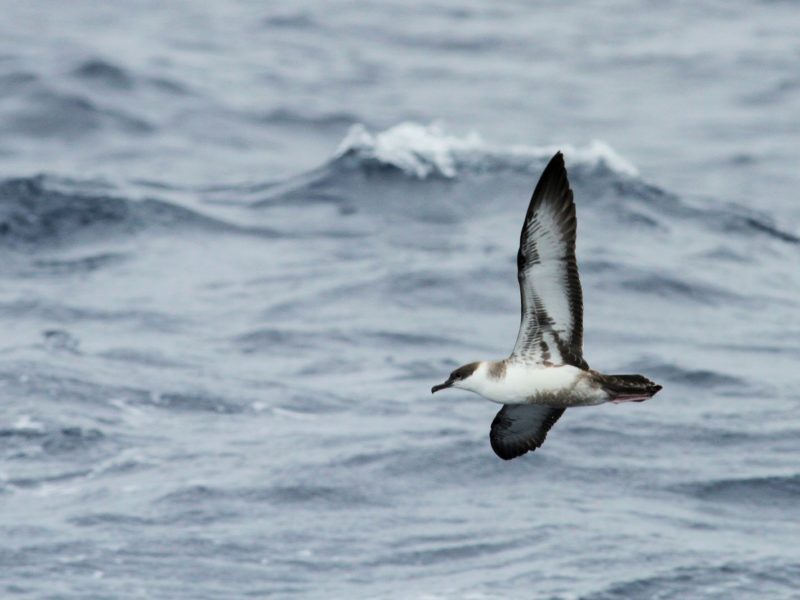 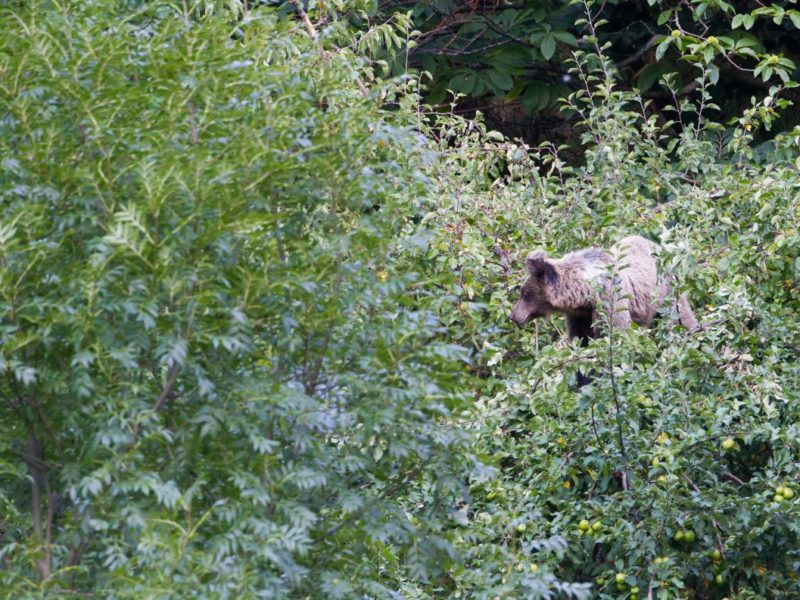 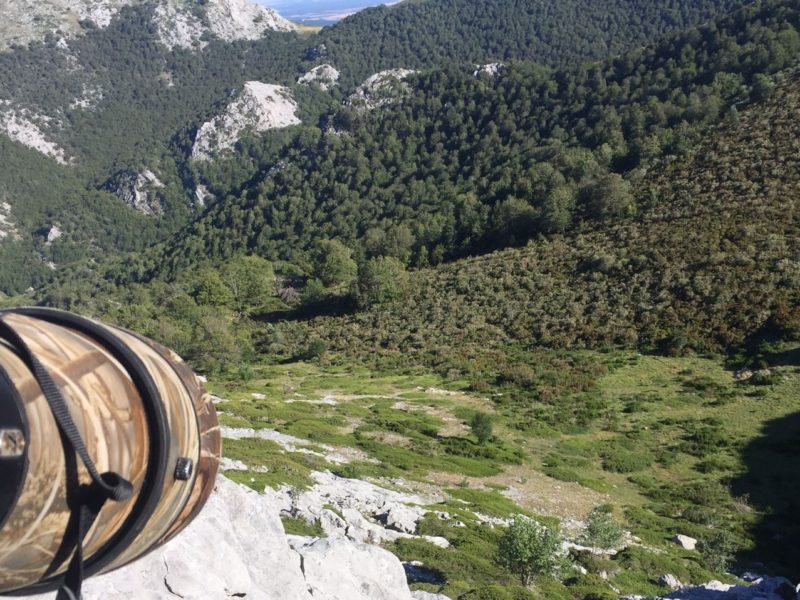 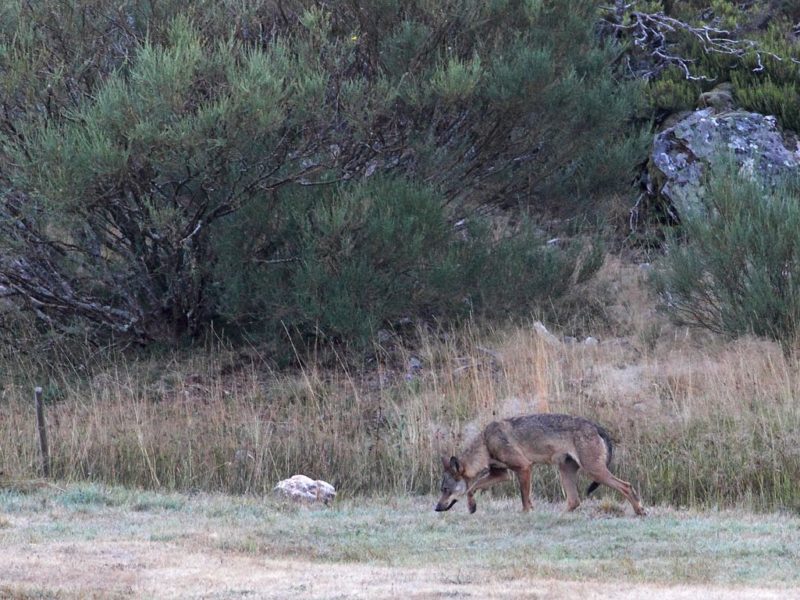 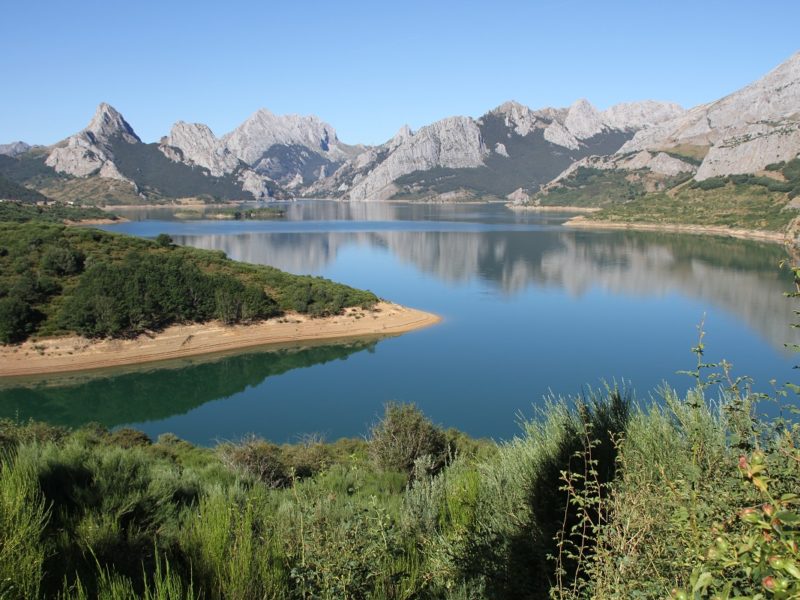 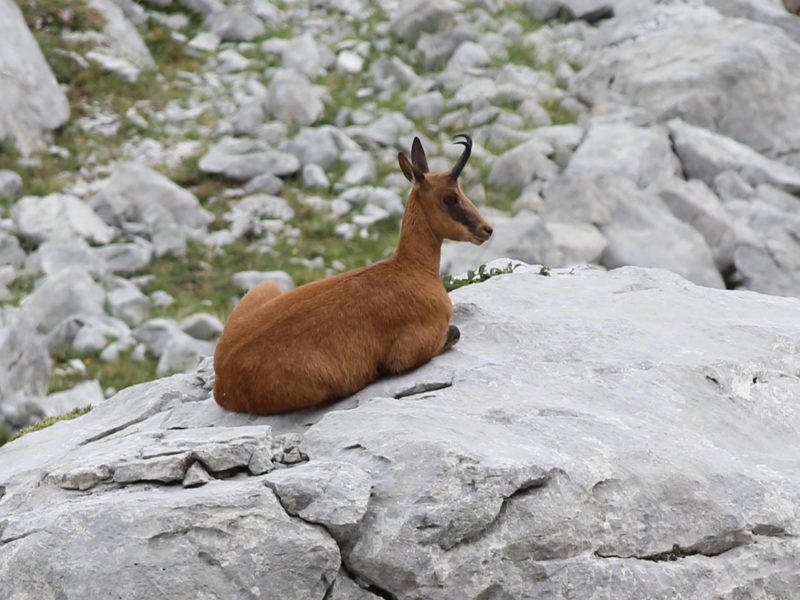 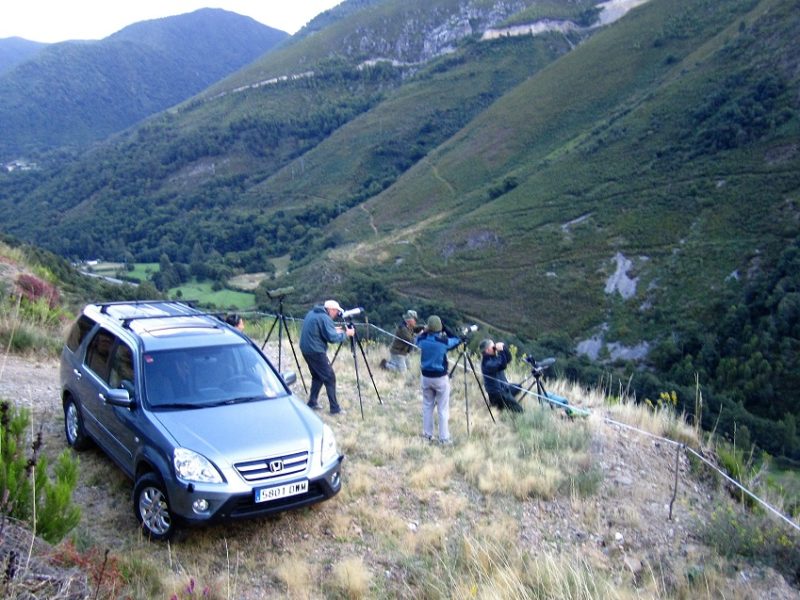 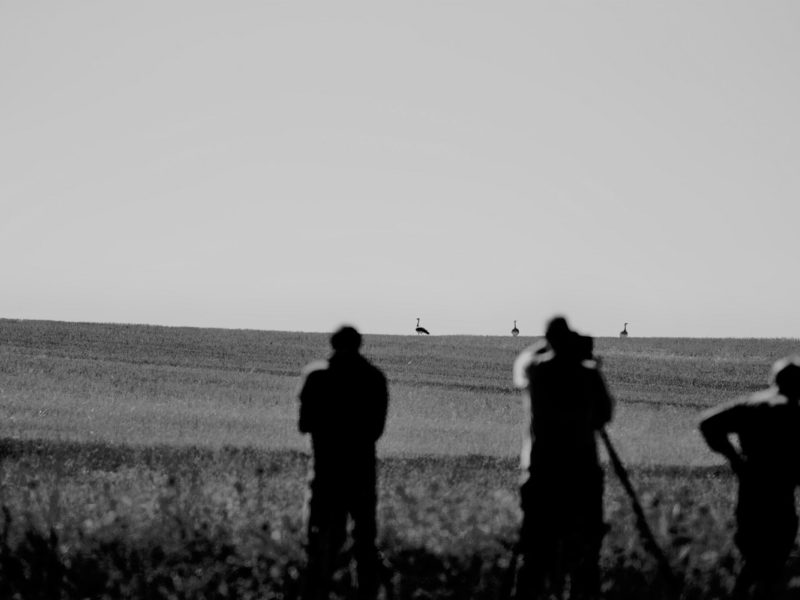 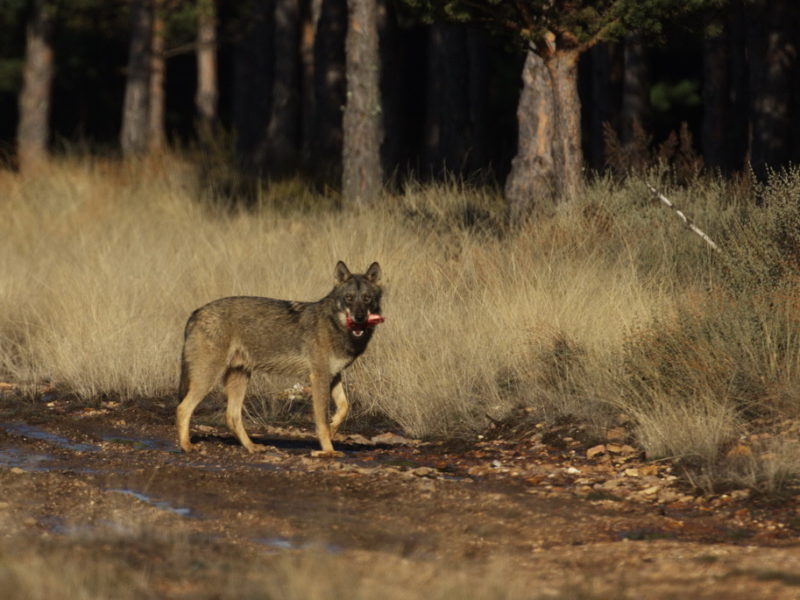 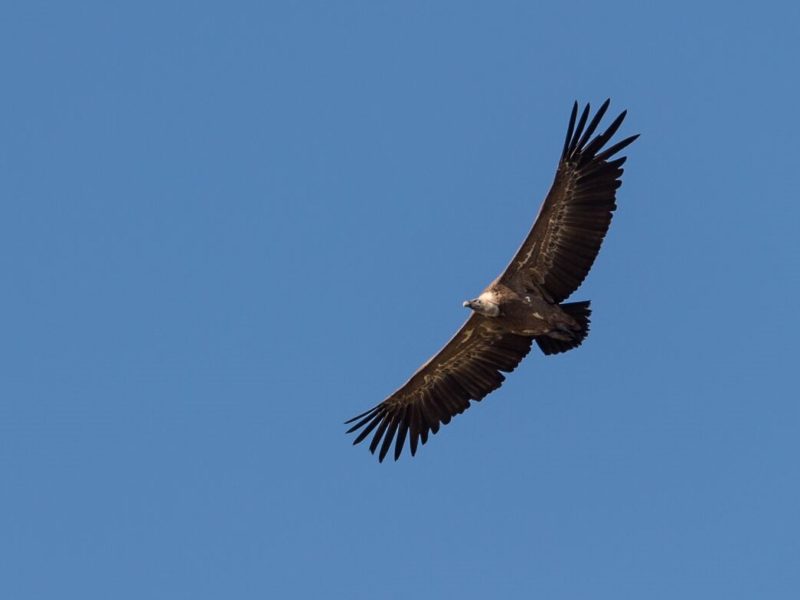