The come back of the Cantabrian Brown Bear

Anno 2018 about 300 Cantabrian Brown Bears can be seen roaming wild and freely in the foothills of the mountain range between Asturias and Leon. Quite possibly female bears with cubs, but also immatures and resident males too. Like most members of the Ursidae family, they have mediocre sight, but sharp hearing  and an excellent and very refined sense of smell. In fact smell is their strongest sense that allows them to survive successfully in the wild among forests of beech, oak, ash and chestnut trees.Meadows and mountain slopes with a mixture of subalpine vegetation, grasses and scattered patches of broom, are a favourite area too where they like to forage, gather or just stroll around. Repentant carnivores, they feed on berries, plants, fruits and occasional meat like newly born Red Deer calves and carrion, often the left overs of  wolf kills. 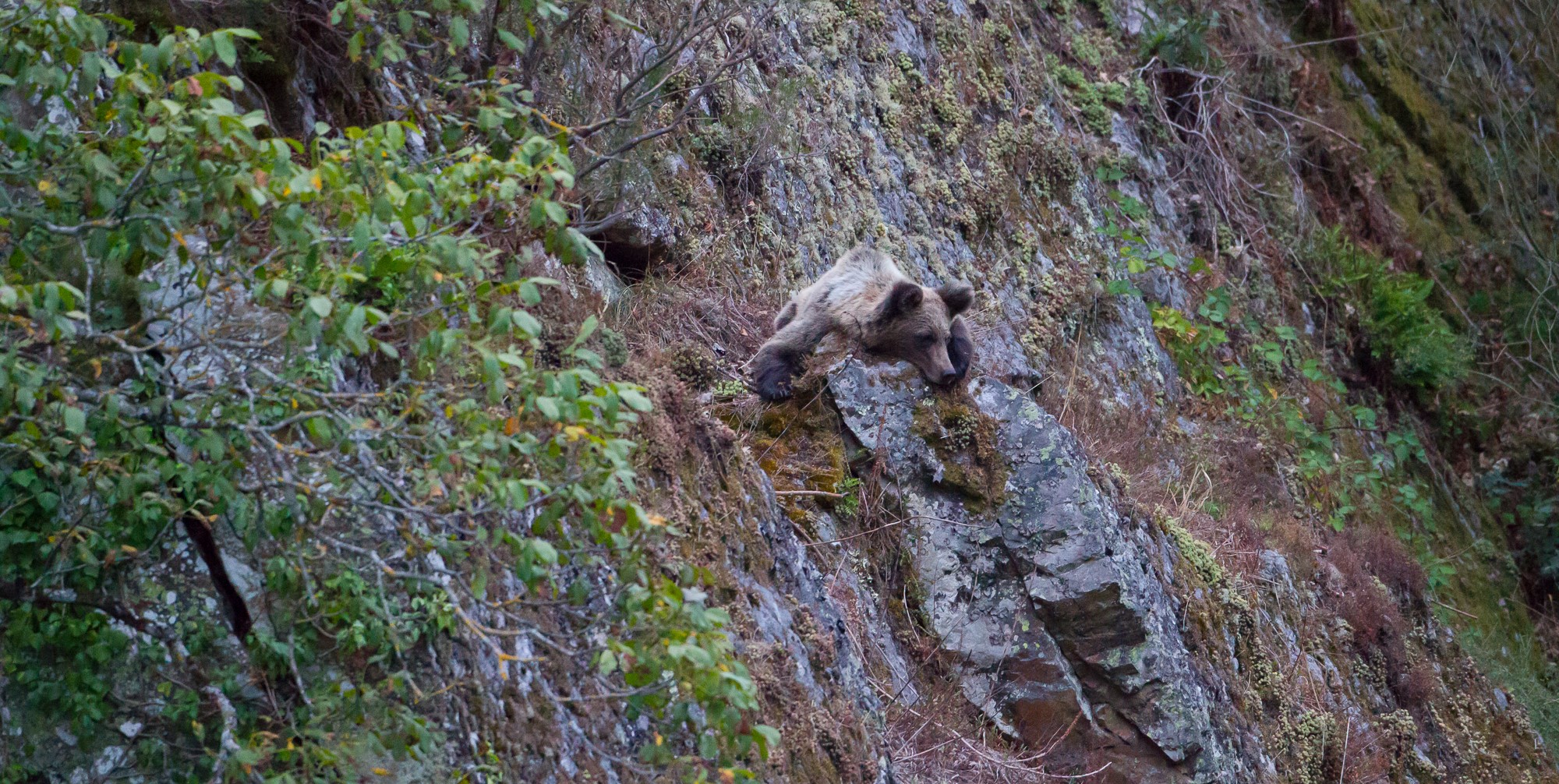 The Cantabrian race of Brown Bear are the newest and youngest specimens of an endangered lineage that only three decades ago teetered on the brink of extinction. Despite being the largest of all Iberian fauna, there were only 80 individuals left in the early nineties scattered among isolated areas. The species is still at risk but its recovery is a success story for sure thanks to involvement of farmers, residents, authorities & Non Government Organisations (NGO’s), specialists in habitat and ecosystems and, most important, well designed policies applied in regard to the territory. All of this has turned the bear into an emblem of Asturias and its thriving nature tourism. 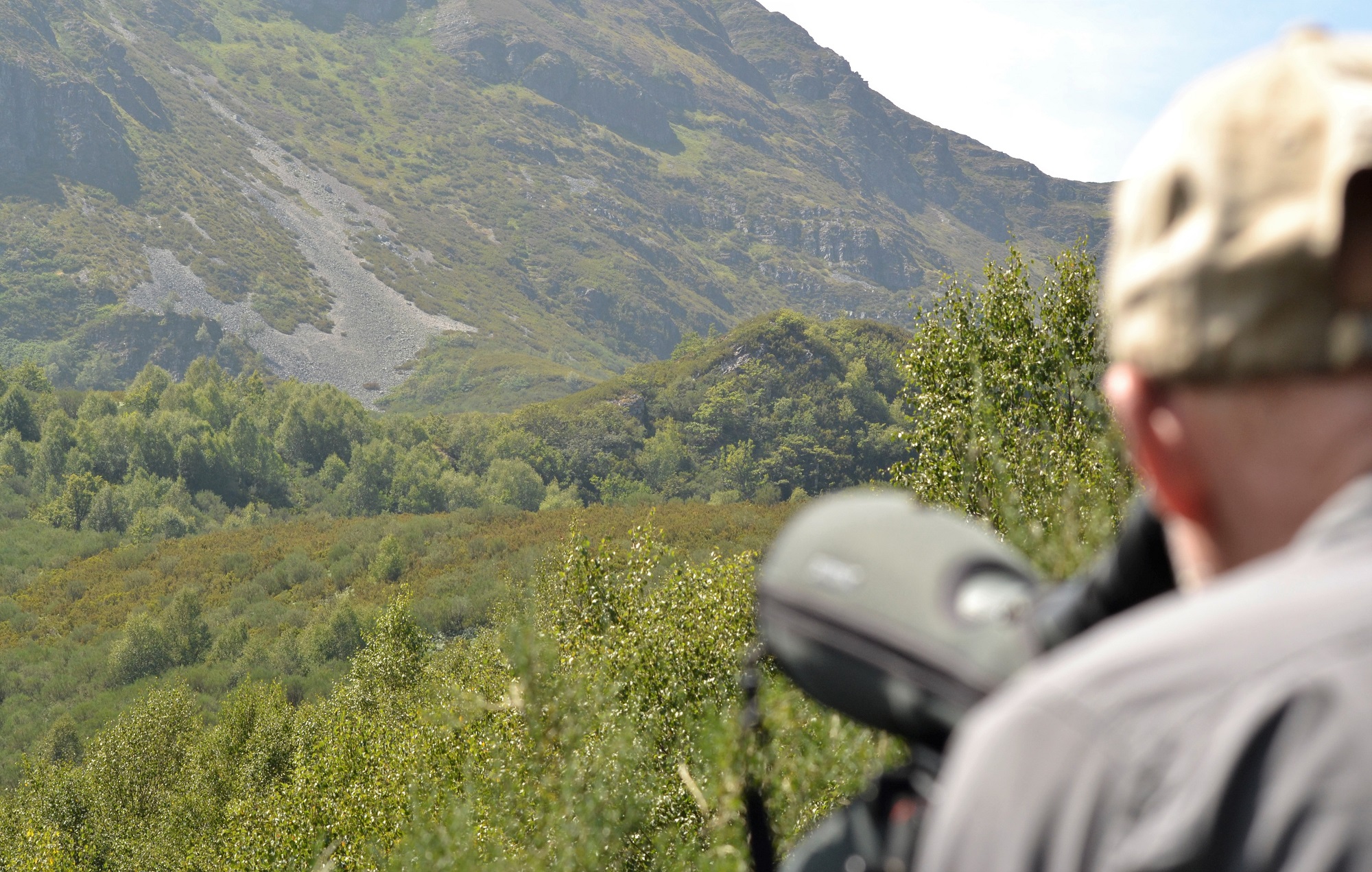 To this day, it still is exciting every time a bear appears in a scope view while running EB5 tours in the NP of Somiedo and surrounding areas in NW Spain.  Incredible to know that, within a period of three decades, the population increased three to four times their previous numbers. With a population that grows every year with nearly 40 female bears and their new born cubs, the future seems even brighter! The FOP (Fundacion Oso Pardo / Brown Bear Foundation – a well known local NGO), biologists and rangers have done a terrific job. Besides fighting against poaching it was especially successful in stopping the degradation of bear habitat that resulted in recovery strategies for the species. Large scale reforestation was an enormous positive aspect too with 11000 trees replanted in Leon, Palencia, Asturias and Cantabria. Also recruiting volunteers from all over the territory promoting support for the natural parks and creating bear patrols – teams of specialists who, amongst other things, give talks at schools and help beekeepers in protecting their honey and beehives against curious immature bears. All this effort resulted in social support and promoting the bears image through rising positive awarness. While present in the area during a tour, it is obvious that local resident Spanish people are proud again in having such an iconic mammal in their back garden. So, with ever increasing numbers, it’s crystal clear that the presence of bears in the area are an indicator of the quality of the natural habitat and that the environment is in good condition.

Somiedo NP and its vicinity is one of the areas where we always look for bears while running EB5 tours. It is a park living without controversy where locals and farmers perfectly live together with the local wildlife.  More than 8000 cows, 4 – 5 wolf packs and 50 bears exist in complete harmony here. Booming ecotourism results in very sustainable tourist related business in the region. Besides many guesthouses, rural hotels, cosy bars and picturesque restaurants, new from this year are information panels near specially made and designed bear viewpoints – in Spanish known as a miradors. 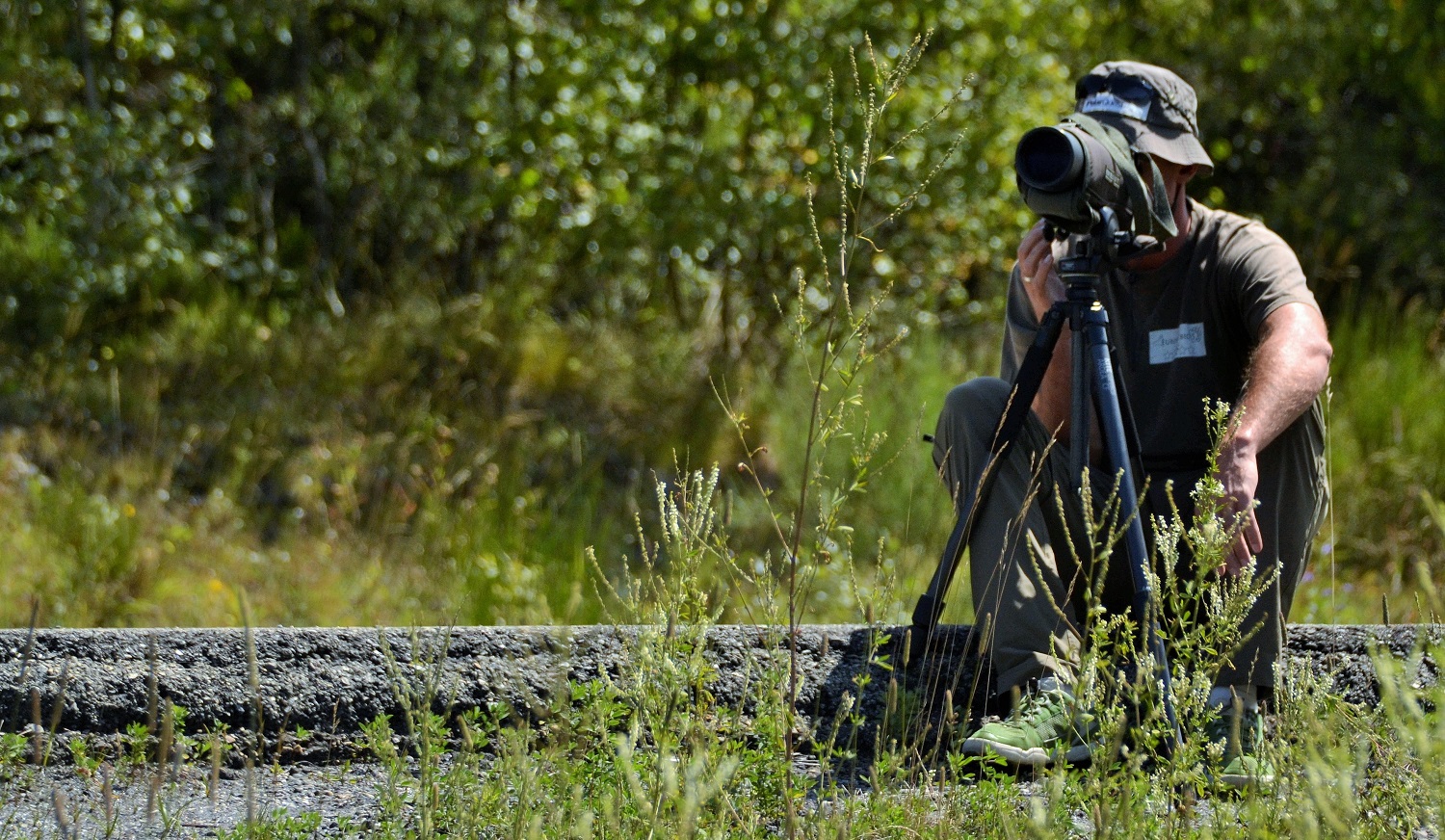 As mentioned before, it is the only place and unique in Europe where browsing bears are roaming free without controlling their movements by luring them in with carrion near baiting sites. End of April and the complete month of May are very good periods to come across bears foraging on spring grasses. Being present early morning and late evening on such a vantage point can be quite spectacular. All of a sudden action might start with bears coming out of the forest into open patches of forested or rocky hill slopes. Males gathering and fighting for females and copulating pairs at some spots isn’t an unusual observation. 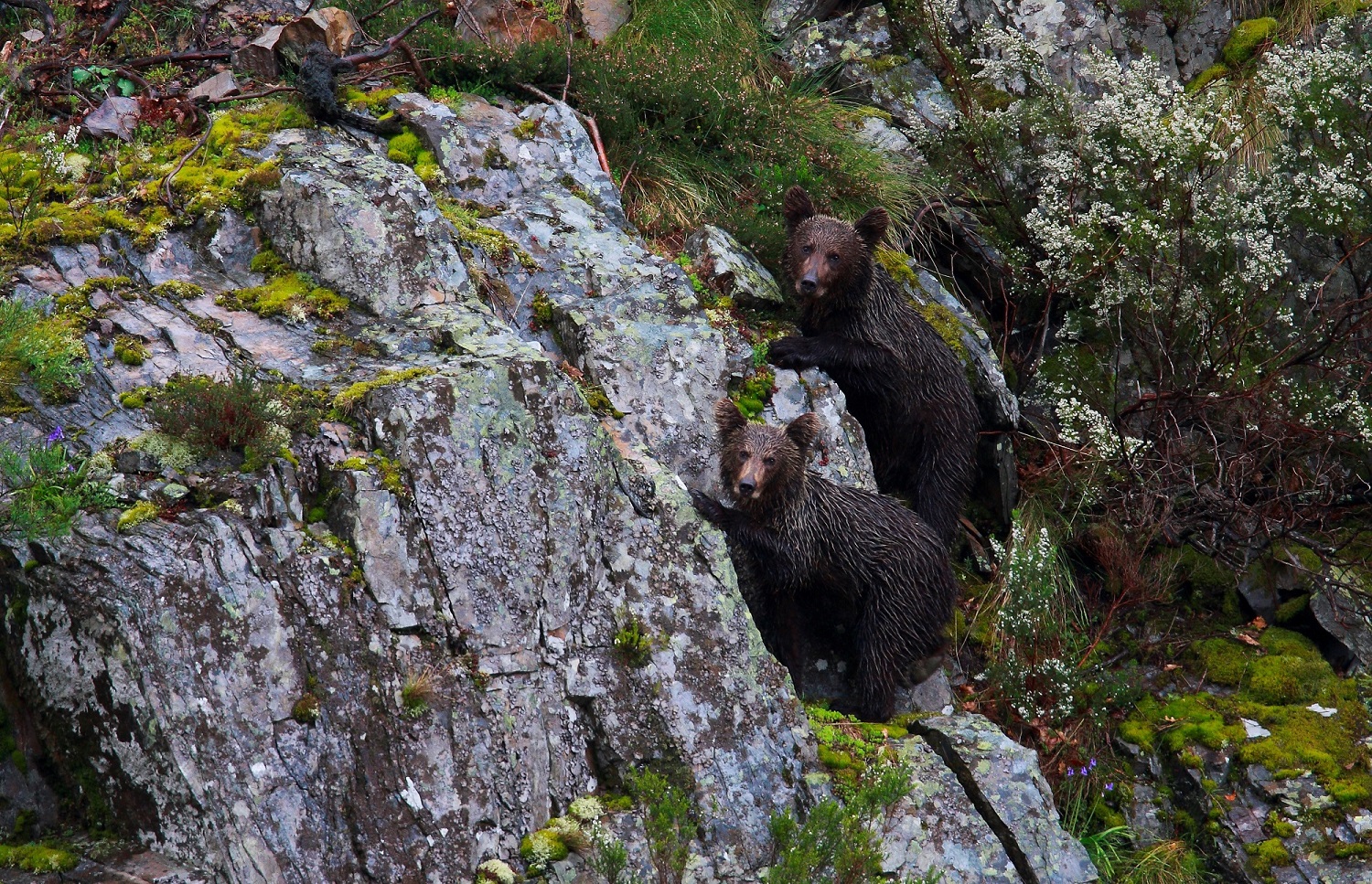 Combined with the arrival of migrating, displaying and singing bird species it can be a very personal moment to witness and be amongst, what we at EB5 call: a spring time bear break. Once again we succeeded this year in finding browsing Cantabrian Brown Bears without much effort.  After several days in the area in early May this year we had knowledge of 20 – 30 bears seen from different public vantage points in the area. We watched several of them for hours while they were busy feeding on spring vegetation – this is what a genuine wildlife experience is! 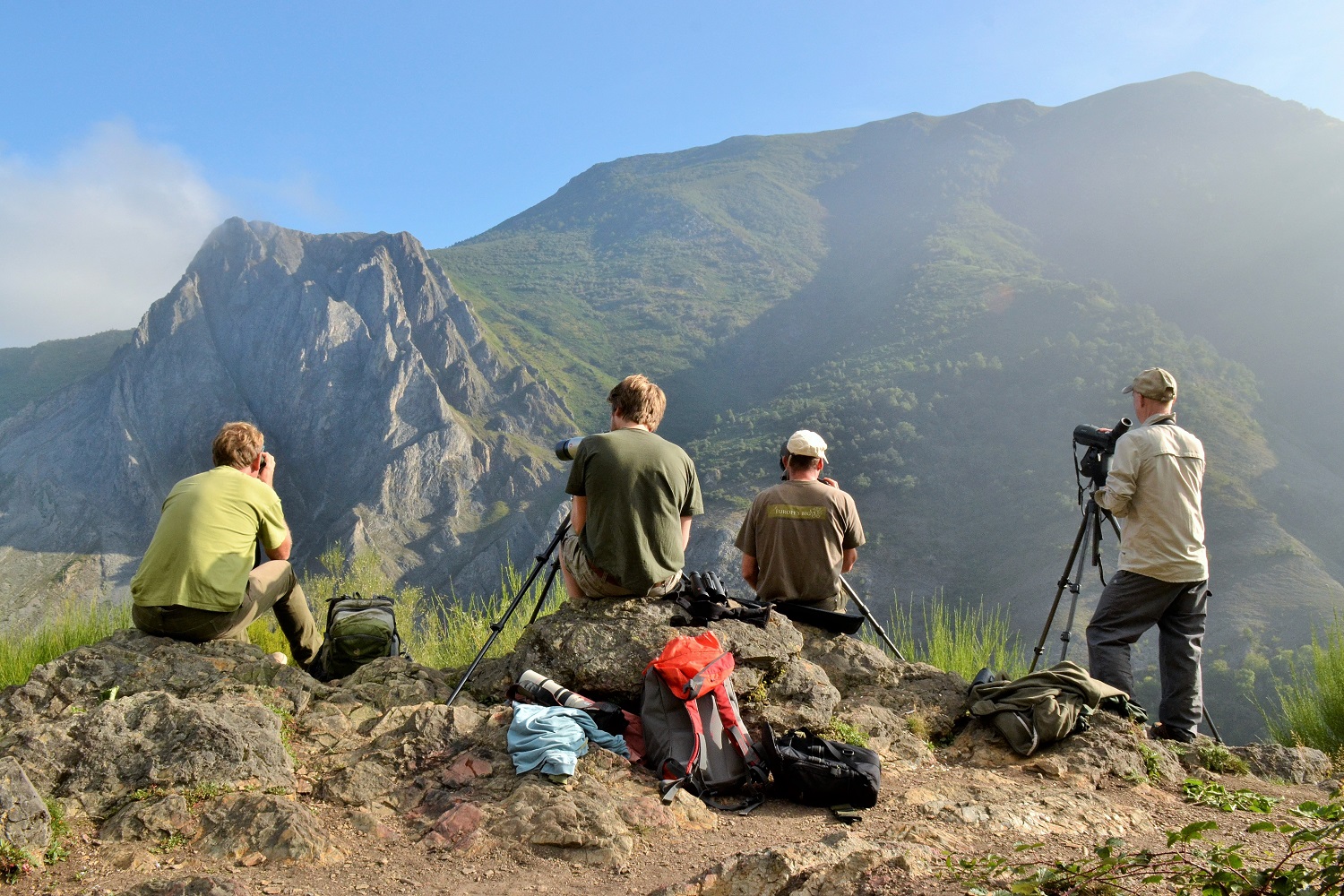 Also, as bears need vast amounts of food in order to amass a thick layer of fat which will get them through the winter, late summer and early autumn are prime periods to go for Cantabrian Brown Bears. Therefore, we target, during EB5 tours, some hilly mountain slopes and meadows where natural bear food is abundant during autumn. In combination with Iberian wolf den watching, this tour is rather unique, very genuine and popular. Not surprisingly, it is already fully booked for 2018! 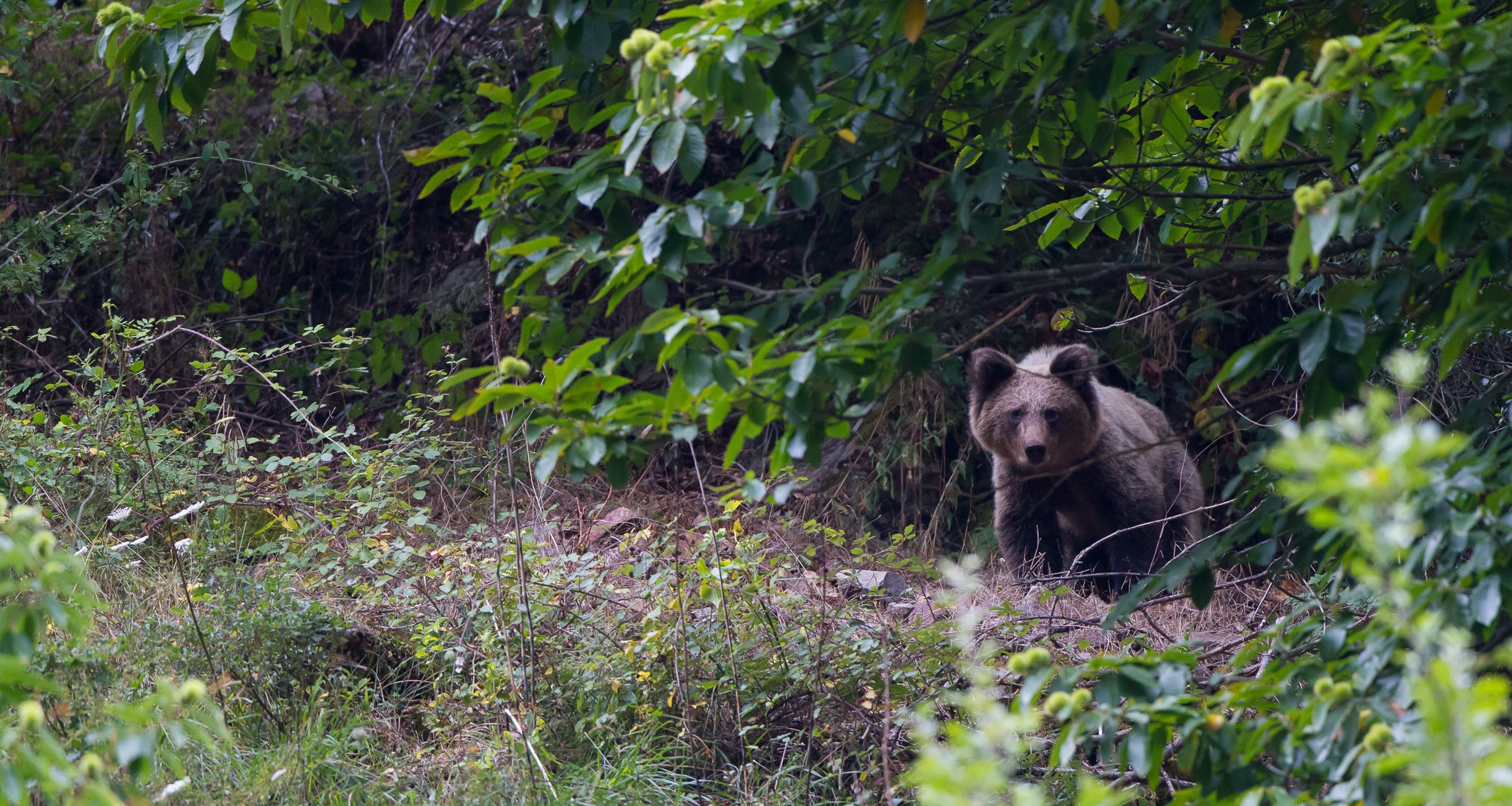