As with previous years our multiple options Bieszczady Poland tours are a never ending story with an ever growing number of sequels. So this means there are more EB5 tours to this remote and wild area of South East Poland. Besides our exclusive tours we offer freelance guiding for overseas wildlife tour  companies that mirror the EB5 tours we organise and run for our own clientele.  We do endeavour to report on an exclusive tour as quickly as possible. Two of such reports have been uploaded recently. Nevertheless this update, it doesn’t give a complete overview of all tours that took place. As mentioned before, when guiding freelance for other agencies we normally do not write reports ourselves so as to keep the written outcome of the tour exlusive for the agencies own blogs or REPORT chapters. In cases of freelance guiding and tailor made stuff, we usually add a summary and a few lines on the outcome of the tour on our Facebook account or NEWS chapter (like this one) for information.

In the wild and vastness of Bieszczady you can never predict with certainty exactly where the wildlife will be or what they will be doing – but our experience of the region is second to none. We put a lot of effort in hiking, tracking, scanning, spotlighting and watching from hides to get the best results and our track record of multiple sightings of the target species of mammals and birds speaks for itself.

Going into details about all our specific tours would take too long so for now just some brief notes of different tours with a portfolio of photographs taken earlier this year. 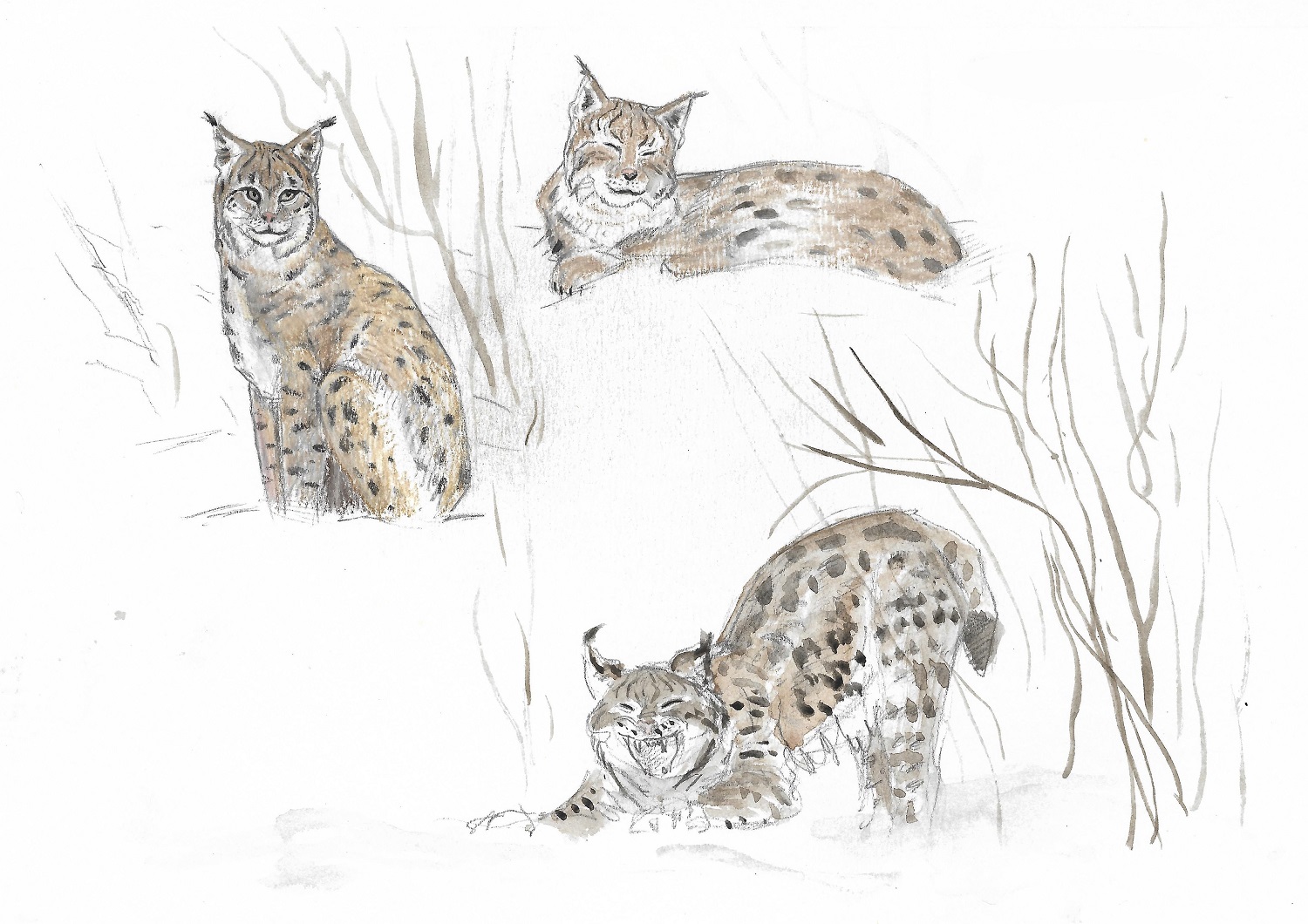 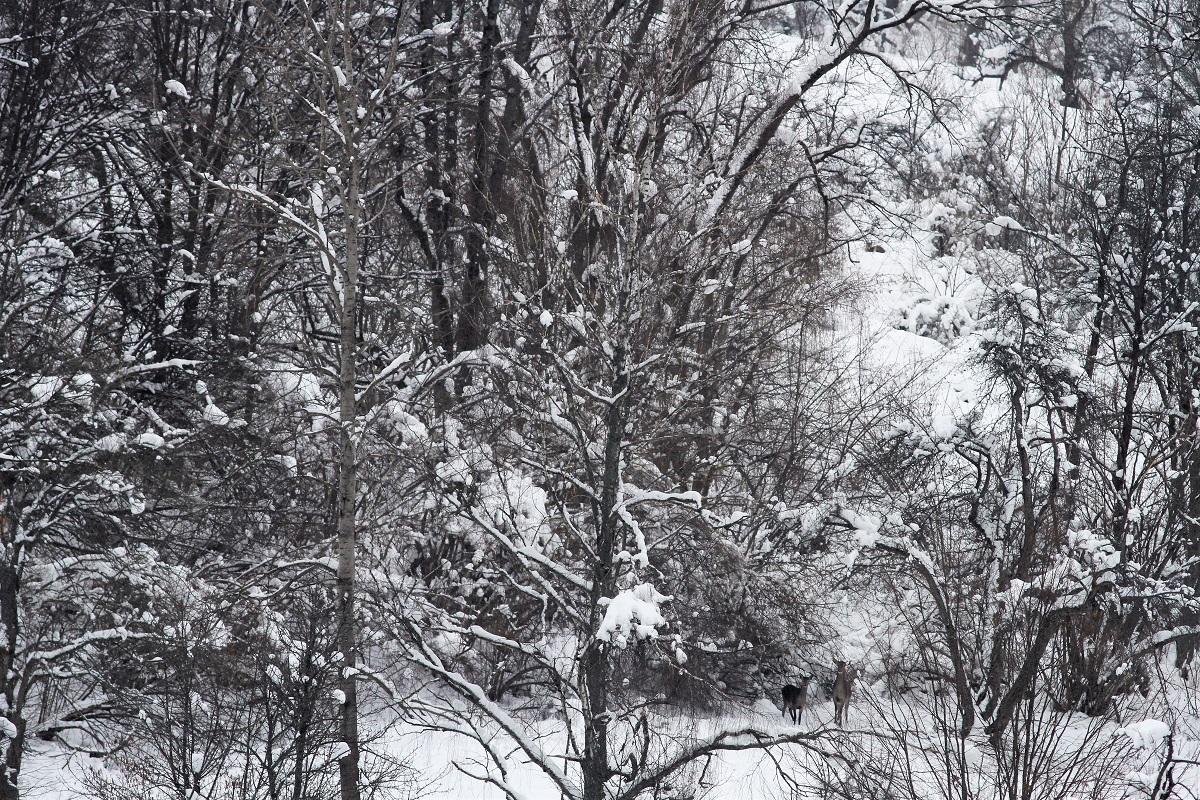 Yes, two herbivores and one carnivore on this picture…©Jan Kelchtermans

Even though we had striking and outstanding Eurasian Lynx encounters in the previous years, we managed to do even better this year coming across this very elusive and most wanted species in February. It was EB5 team member and artist Detlef Tibax who spotted the Lynx (whilst on  second guide duties with Jan who was guiding a freelance EB5 tour for an overseas agency). It sat relaxing in a clearing in woodland on the opposite side of a valley from a vantage point well known and frequently visited by EB5 tours.

Three and a half hours were spent observing every small move the Lynx made –  sitting, dozing, stretching, yawning – all the time it was aware of us and some nearby Red Deer. At one point it wandered off, only for it to return to its original position a short time later.

Overlooking the river valley with a long view of forests broken by large meadows we had a wealth of wildlife in front of us – the Lynx, Roe Deer, Red Deer a Red Fox and eventually a herd of bison appeared from over a hill. This was a pretty magical three and a half hours that our fortunate clients and leaders will probably never forget. Eventually, we had to leave as the forest tracks didn’t look great for night driving, and so, regrettably we had to leave the Lynx behind, still sitting in the same spot where we had first spotted it. Wildlife watching at its best without a doubt. For Jan, acting as the first guide during this tour, it was his 9th Eurasian Lynx sighting in the area and the most prolonged views. 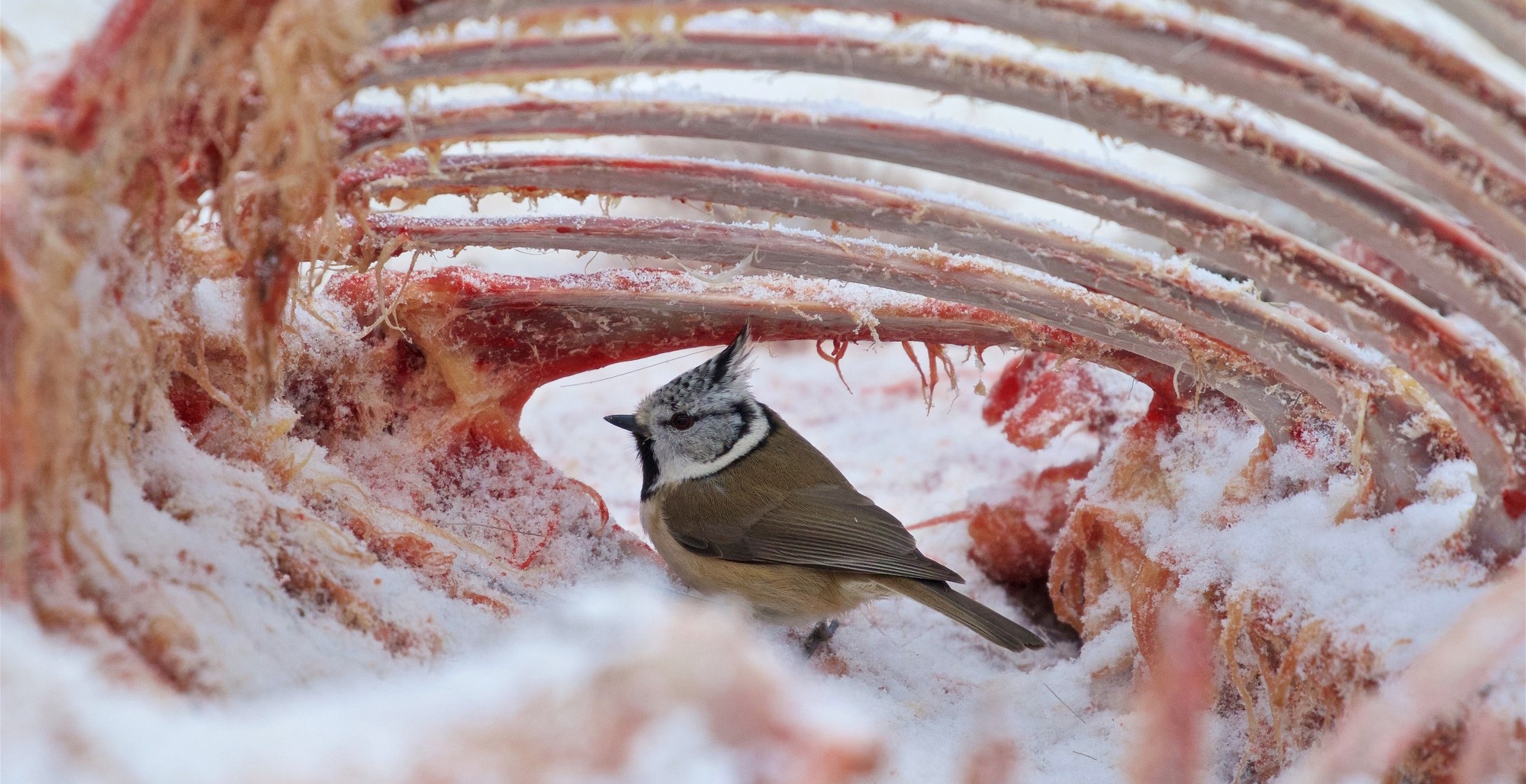 According harsh and snowy winter conditions, multiple wolves kills were found too. Often near roadside locations. One morning, after breakfast, we headed back to such a triple wolf-kill site where customers were given opportunities to get out of the mini-bus and take a look at what remained of one of the carcasses. After sliding and stumbling across the rough and snowy ground, a small flock of tits was found bussy feeding on a virtually bare red deer skeleton. They were mostly Coal Tits but, while waiting, they were joined by two Crested Tits, all feeding on the remaining frozen flesh. Shots of ‘cresties’ are rare enough, but to see them feeding from inside the remains of a wolf kill was a once in a lifetime opportunity not to miss! Although earlier in the season, a bit the same with a day active Pygmy Owl hunting mice near a forest stream!

Less than two months later Jan again found a Lynx, but  this time a brief view of an individual sitting in front of a Beaver lodge. While spotlighting one evening the beam picked out an interesting animal with large green-tinted eyes and a cat-like posture and movement. Those fortunate to be well positioned in the mini-van picked out the twisted ears and distinctive face of a Eurasian Lynx. Not everyone in the vehicle could make it out because of the thick vegetation the cat was seen against and after a short time it vanished completely from view. Despite a great deal of scanning, it couldn’t be relocated. Great to find another Lynx, but a brief and less than satisfactory viewing and of course very disappointing for those that couldn’t see it.  While continuing into the night a beautifully silhouetted view of a Eurasian Wildcat was some compensation.

Also remarkable  on this tour was a cracking Pine Marten foraging around in one of the meadows during the day.  To watch one of these normally shy mustelids naturally hunting out in the open is a rare privilege. Intent on its task, the marten mostly ignored the admiring presence of our group. We had assumed  it was hunting voles, but a couple of the associated digital images (reviewed later) indicated it may have been catching and consuming Common Lizards which we had noticed becoming active in the warm spring sunshine. Later we drove through the forest and picked out a Bison hidden away in the trees. It had chosen an excellent spot as the back of the animal blended so well with the shadowy woodland. This big animal was lying down in the leaf litter and although very much aware of our presence, it really wasn’t concerned about us.  We stayed with the beast of the forest and eventually found a second animal standing a little deeper in the trees. Wonderful stuff!

A day in the field in Biesczady

Although the primary objective is to find  Eurasian Lynx , there is  of course  more to Poland than Lynx as it is a fabulous destination for the mammal watcher looking to find some cool European mammal species. The following two paragraphs are a nice example of what you may  come across while  searching for Eurasian Lynx:

Wednesday 4th April, 2018. We spent a very pleasant day driving, scanning and walking forest tracks seeing Red Fox, Red Deer and Roe Deer but also a great spectacle of hundreds of Common Frogs mating/spawning. Then just before 17:00 we spotted a Brown Bear in a meadow – absolutely brilliant and great views as it munched on spilt corn. 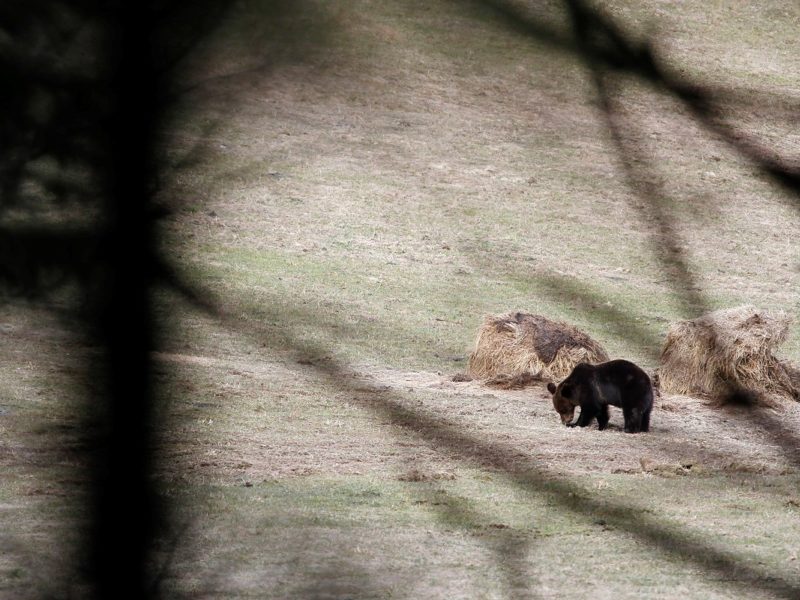 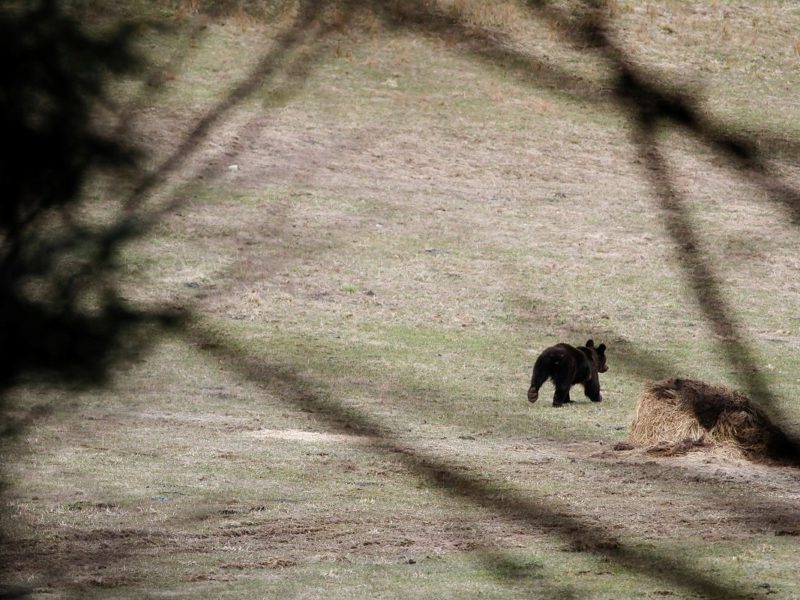 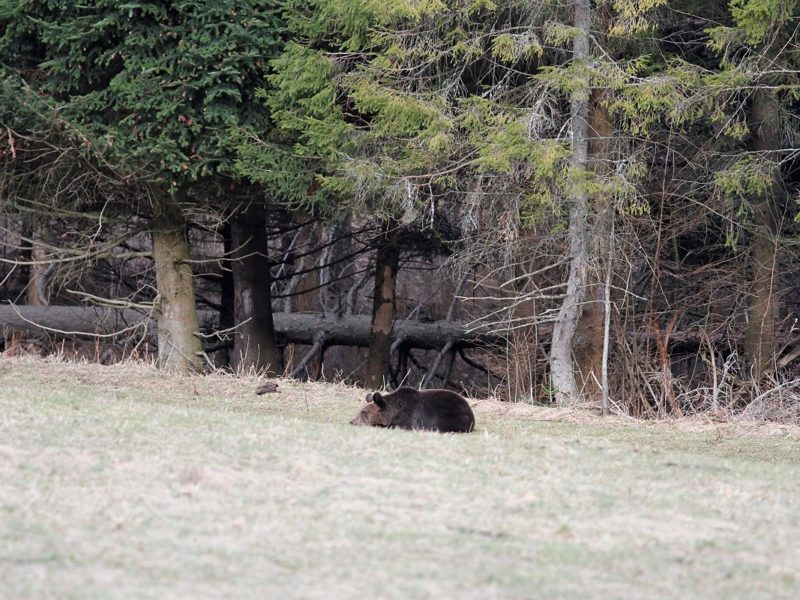 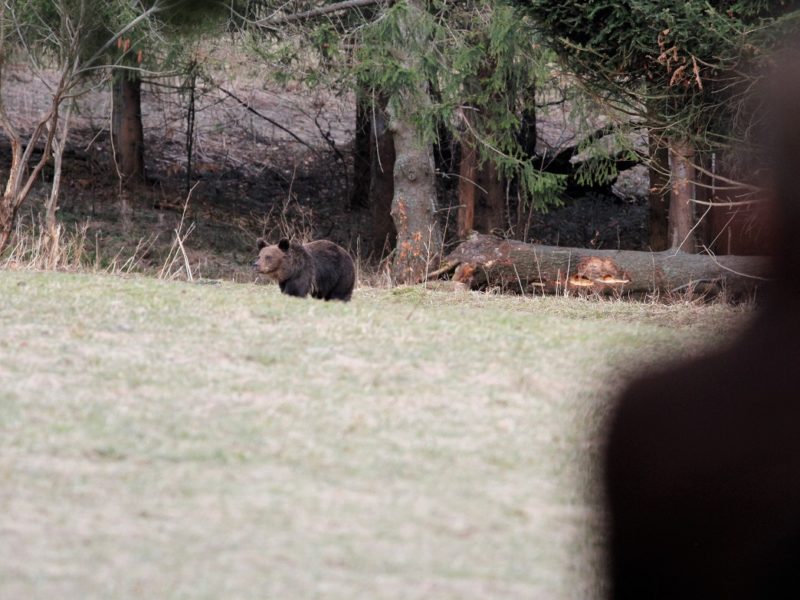 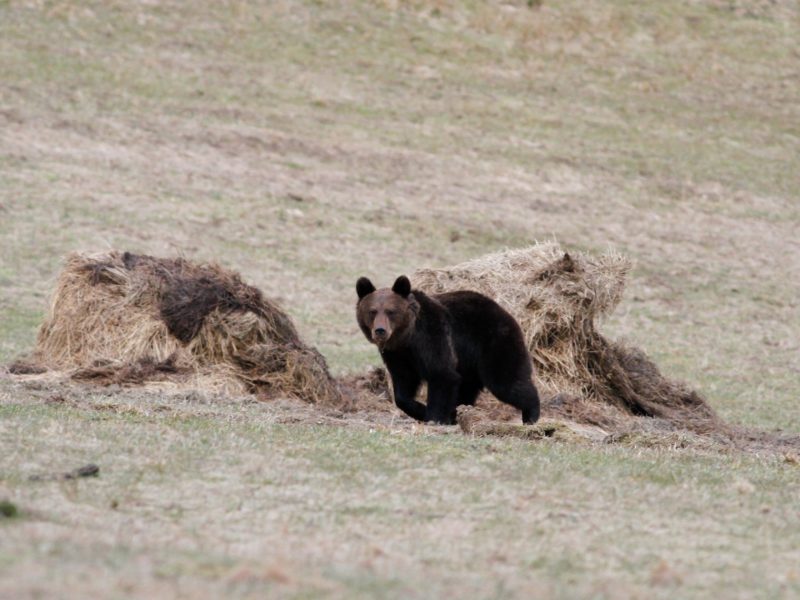 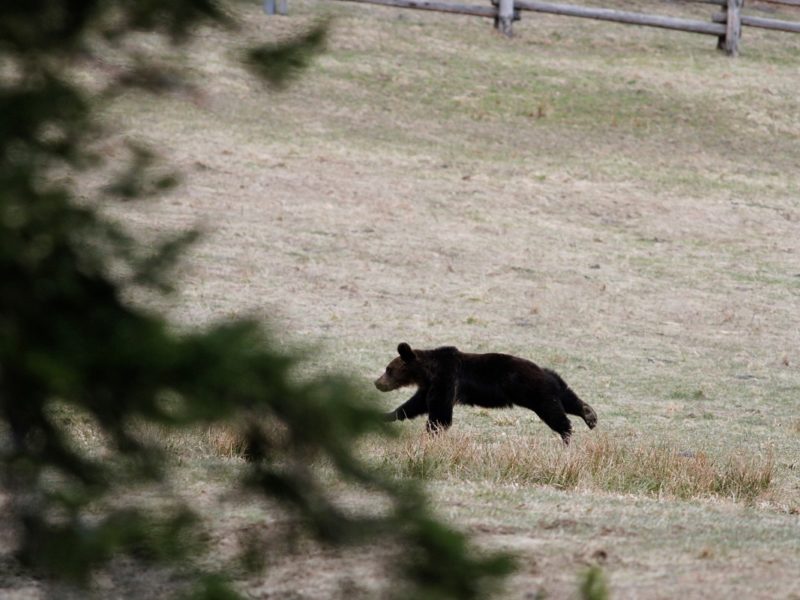 At one point it ran off to the edge of the forest, although still in view, and after about five minutes it made its way back to the middle of the meadow and resumed eating the corn. It was obviously nervous but it wasn’t aware of us as we had the wind in our favour and we remained very quiet. It appeared to be spooked by the noise of the trees when the wind gusted and eventually moved off into the forest.

We drove to a watch point above a river valley where we remained until dusk. It was good to catch up with a couple of European Bison – a cow with last year’s calf in tow – along with the usual Red and Roe Deer. We got back to our hotel around 19:30 and after our evening meal we went spotlighting from 21:15 to 00:15. At least six Red Fox sightings, two Brown Hare, two Beaver, two Pine Marten and a single Wildcat. 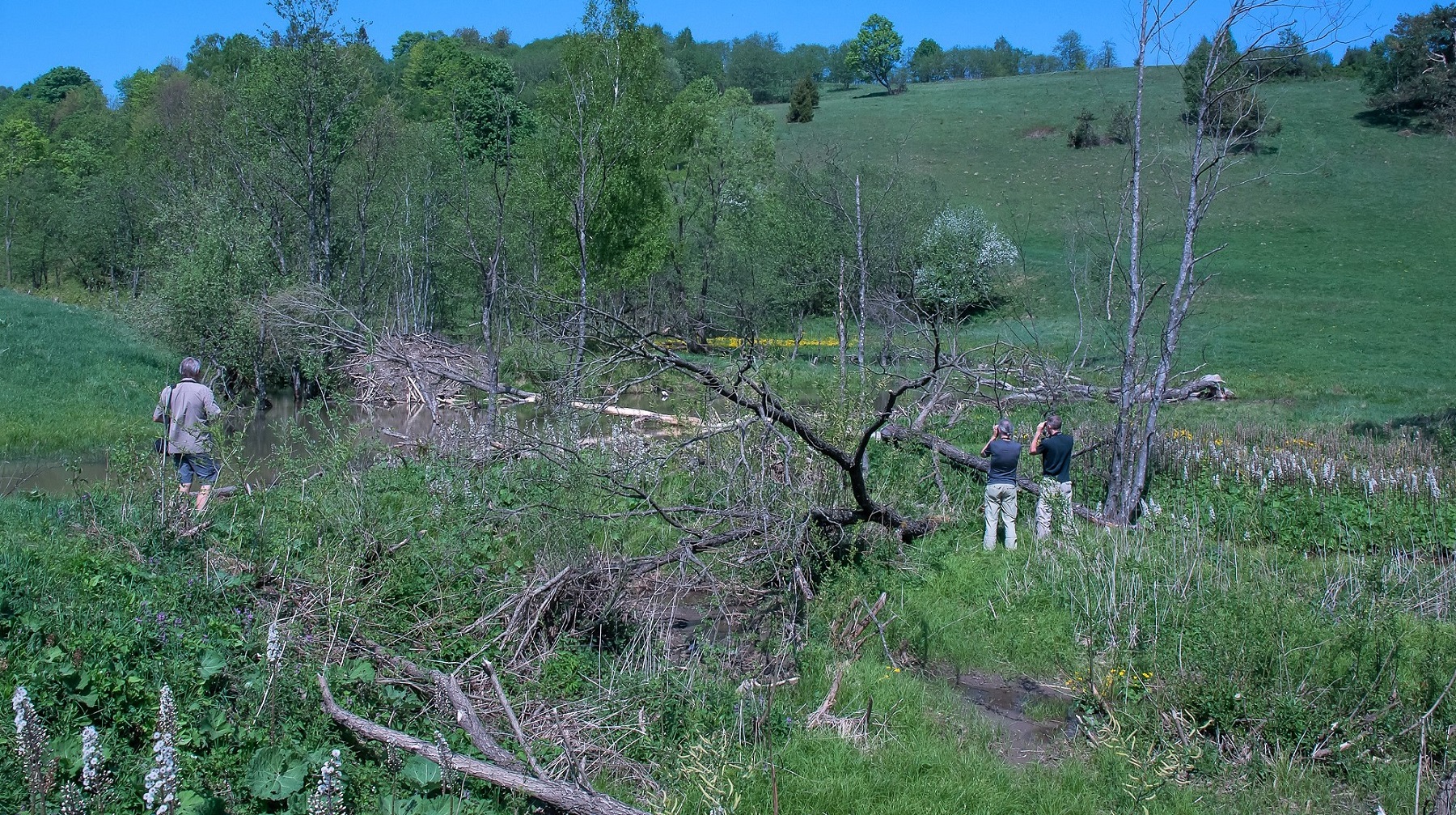 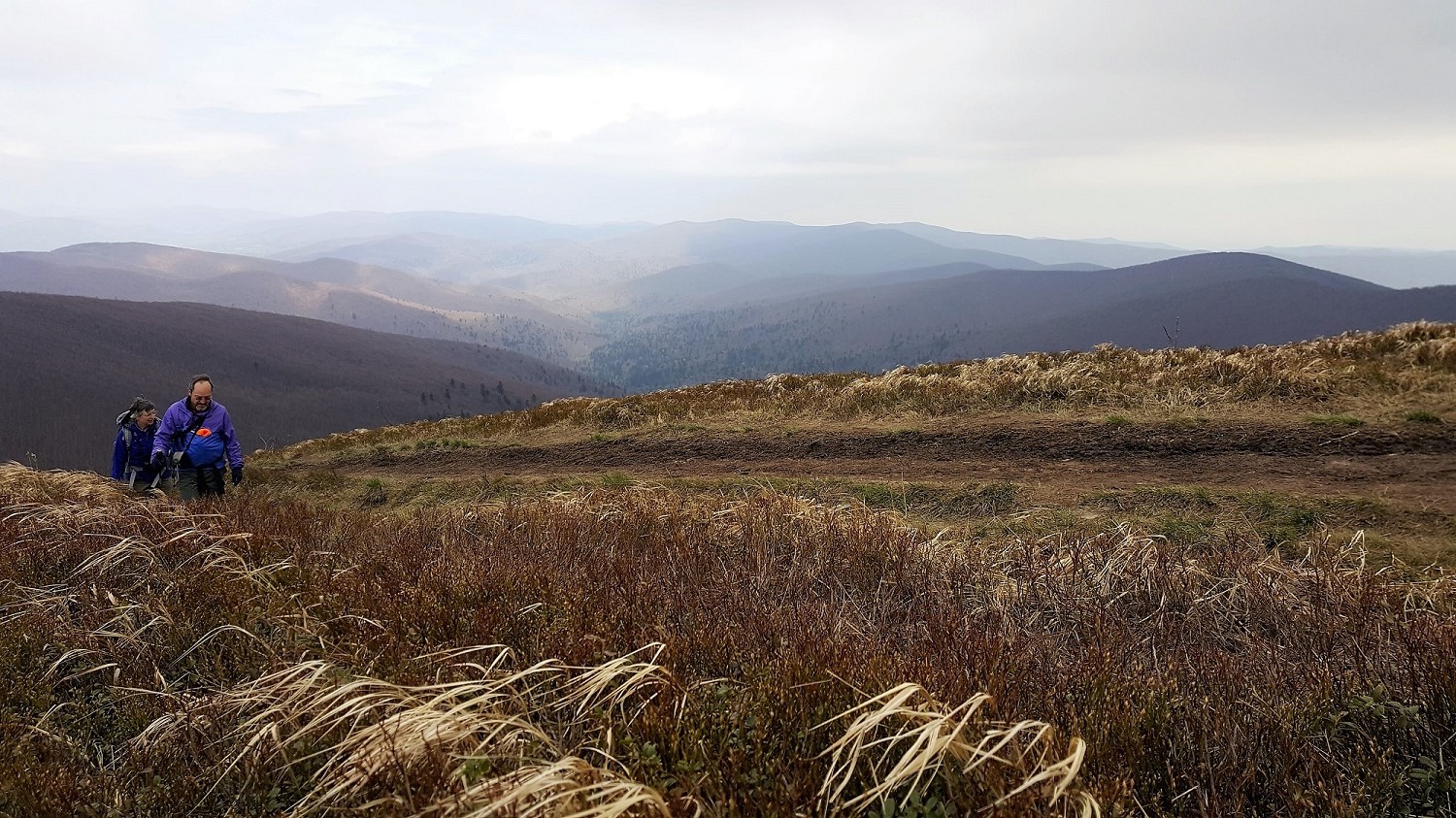 Bieszczady is a National Park well known and visited by many Polish especially during the summer season. Although there is definitely too much human disturbance for wildlife spotting at that time of the year,  views over the Carpathians are outstanding and well worth a steep hike towards the subalpine mountain ridges in the region.  Although there are many more people about it doesn’t  necessarily mean the wildlife can’t be found. Similar to last year, we guided a private tour in May this year which was very successful.  Jan’s tour last year produced Wolf, Bear and Bison; René’s tour this year had Wolf, Bison, Wildcat and Otter. More over, with new arrivals of summer migrants, some extra bonus bird species are present too such as Red-backed Shrike, Red-breasted and Collared Flycatchers. An extra bonus while scanning during dusk from vantage points is the endless sound of calling Corncrakes!  In addition, EB5 has the necessary permits to drive the more remote forests, and  the extra dimension of sessions in hides.

Multiple option photo tours are possible in Bieszczady too. We already organise tailor made tours for wolves in pristine, snowy conditions which have been very successful. Visits later in spring have been very productive too. No better way to show this than with a Bieszczady spring 2018 portfolio of WOLF & BISON taken by EB5 guide Karl Van Ginderdeuren. As Karl will be acting as a first tour guide next season in the area, hopefully, more of these high quality and very atmospheric shots will follow! 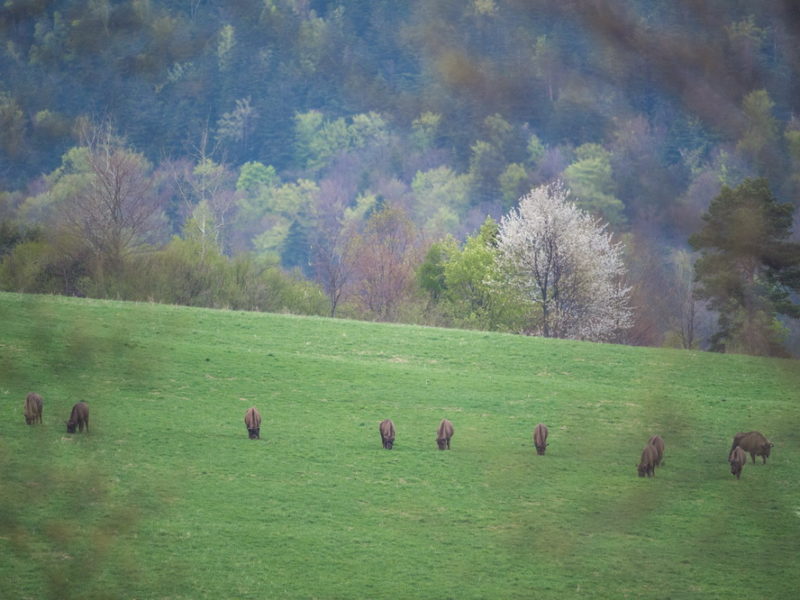 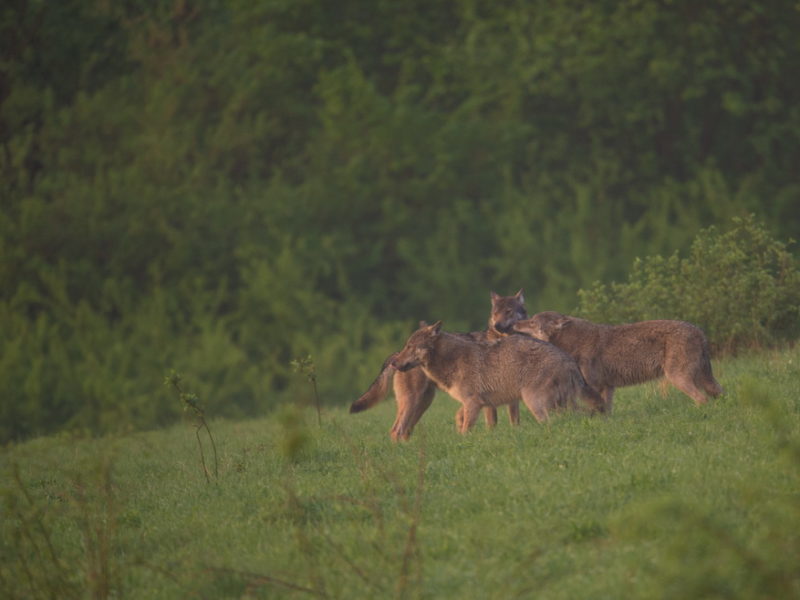 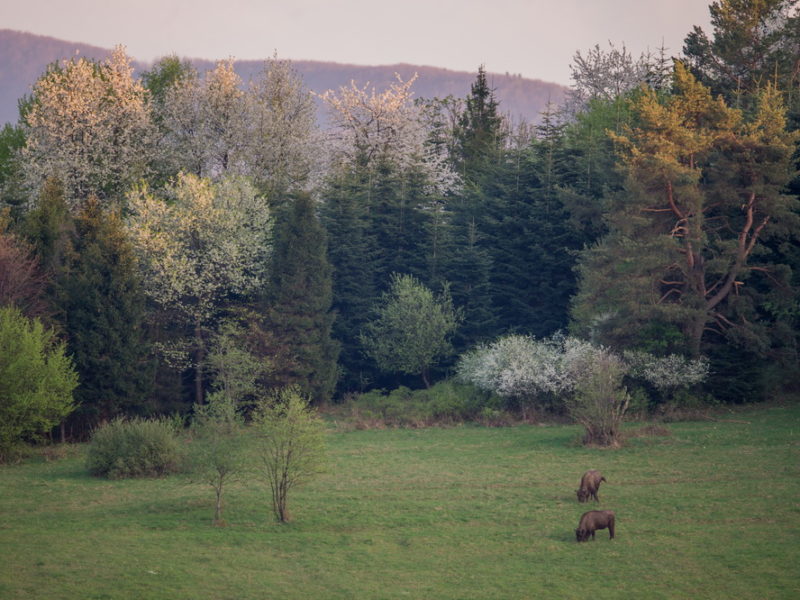 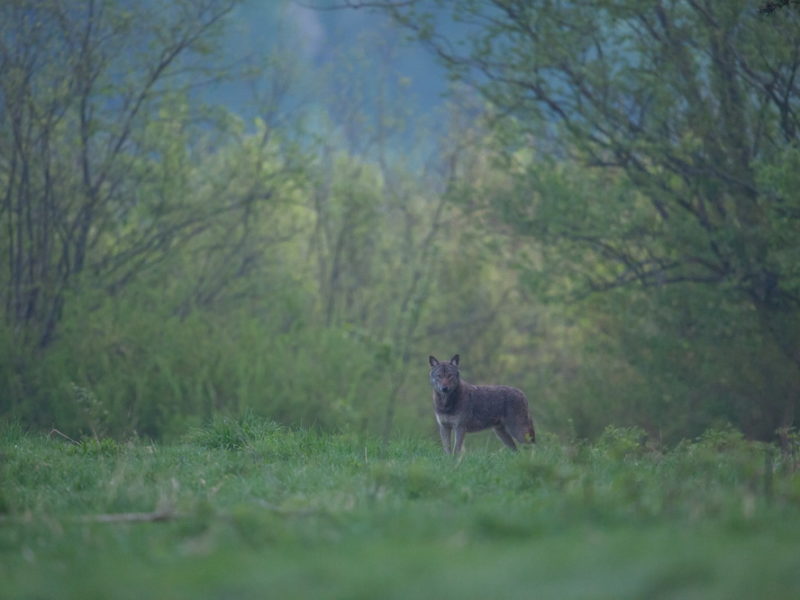 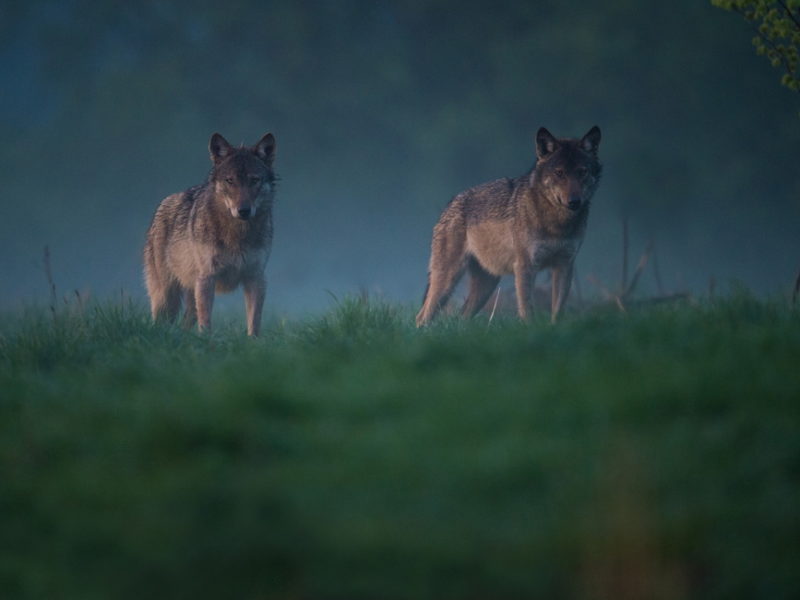 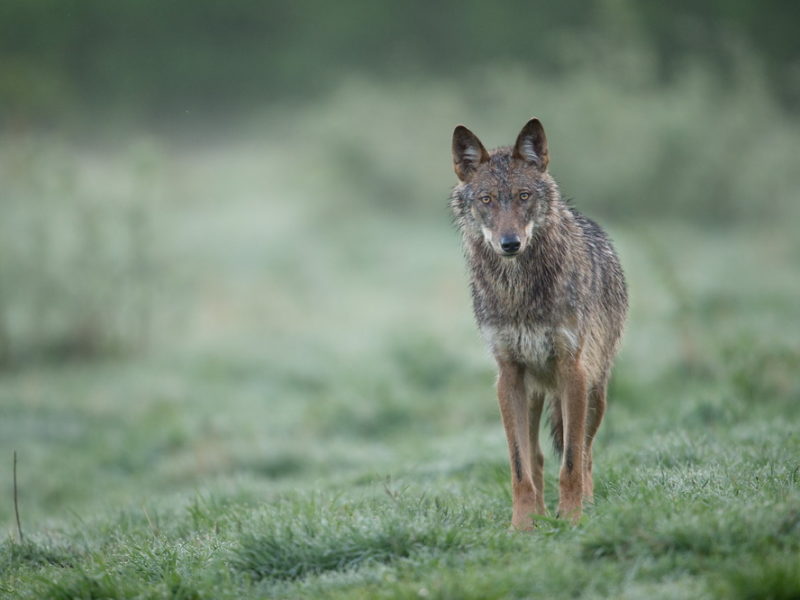 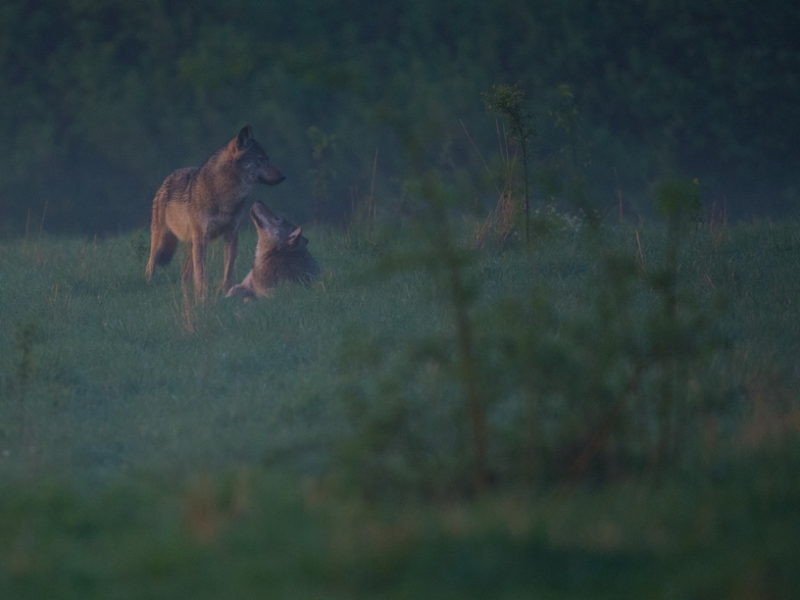 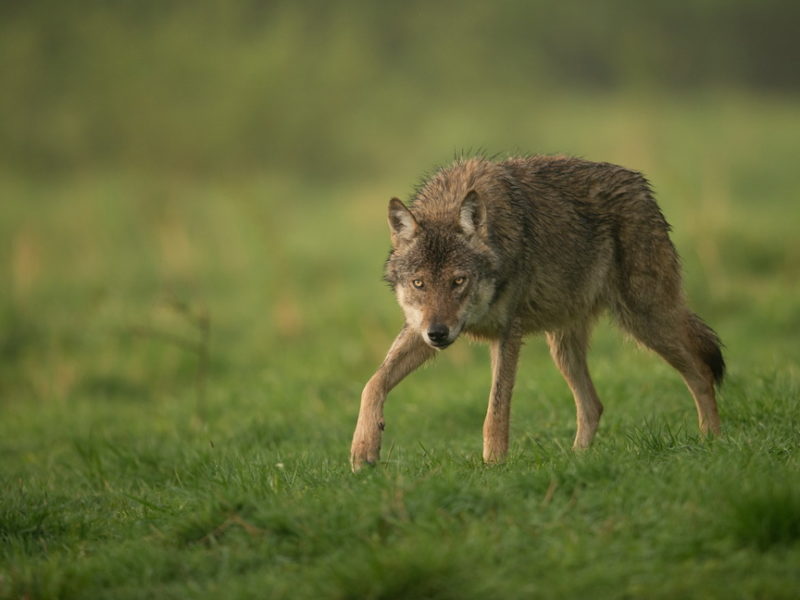 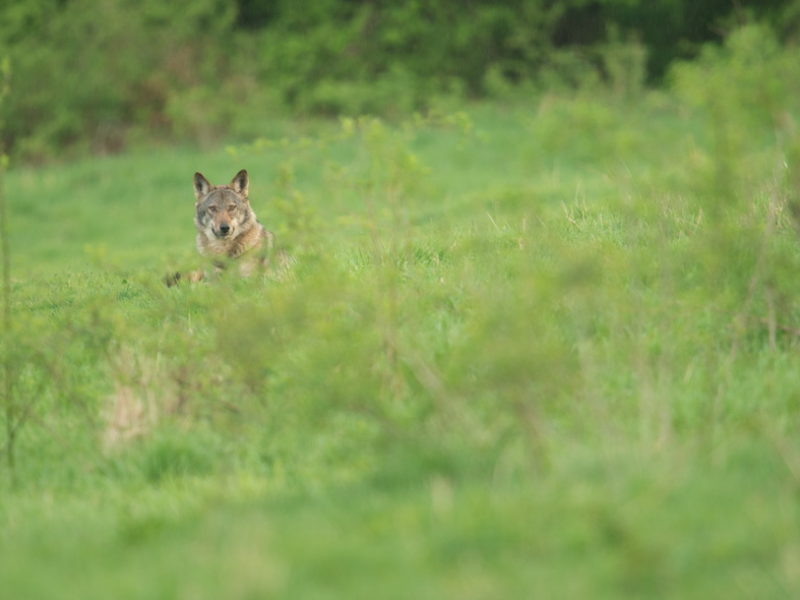 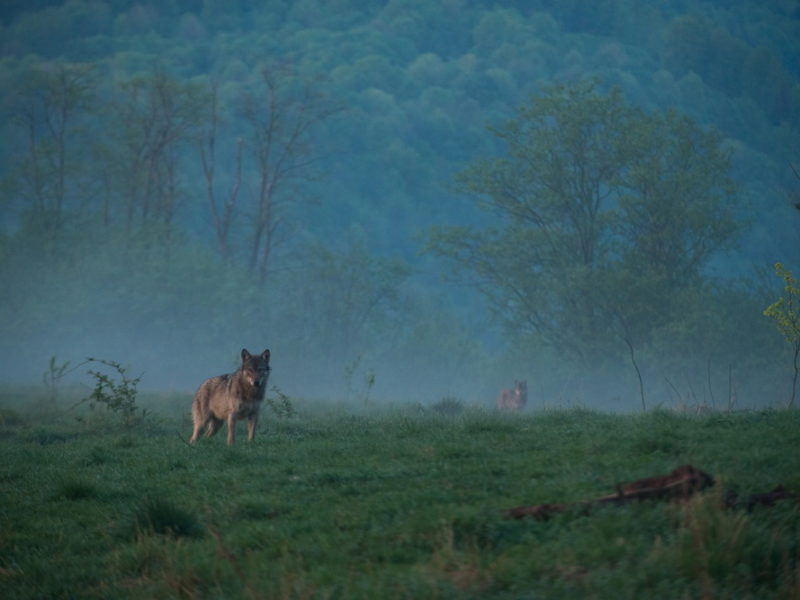 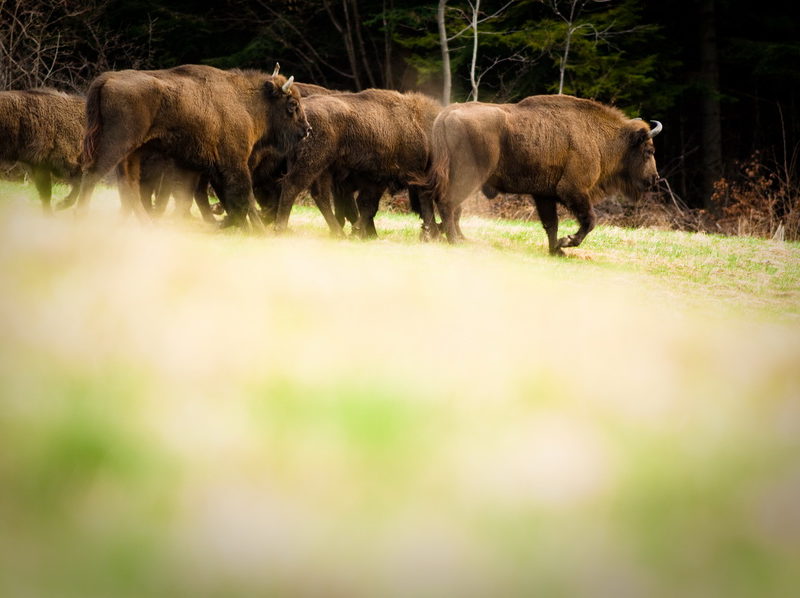 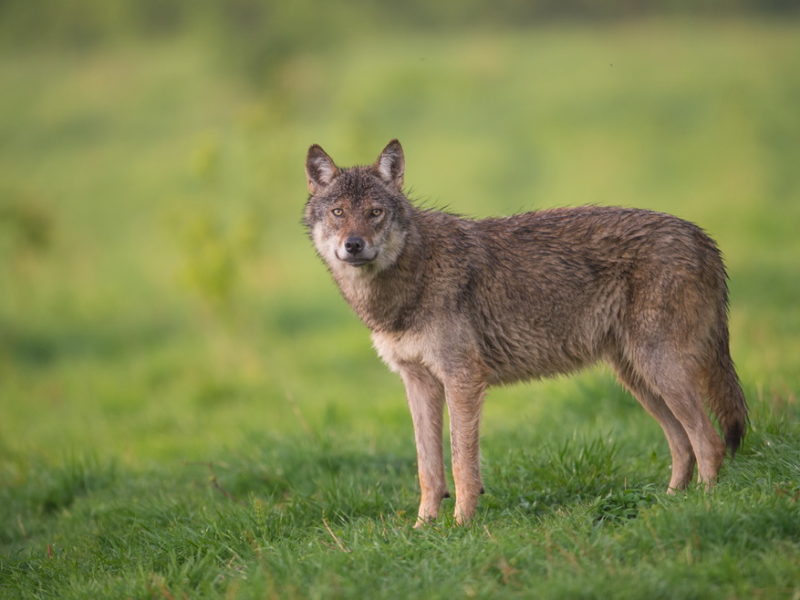