Jan has again been guiding this summer, he has been doing this successfully for Finland’s well known three large carnivores – Brown Bear, Wolf and Wolverine since 2015.

Nowhere else in Europe can these three iconic predators be seen with such relative ease.

The global concept of using blinds/hides baited out front with carrion does make things a bit easier. Of course  wolves and bears can be seen ‘naturally’ in various European countries without the luring in with bait technique. However, with wolverines things are different as these animals really are next to impossible to see by scanning from vantage points or by random forest driving. So, nowhere in Europe or any where in the World in fact is there a reliable spot where these mustelids can be more or less guaranteed without the overnight strategy of staying in a baited hide. 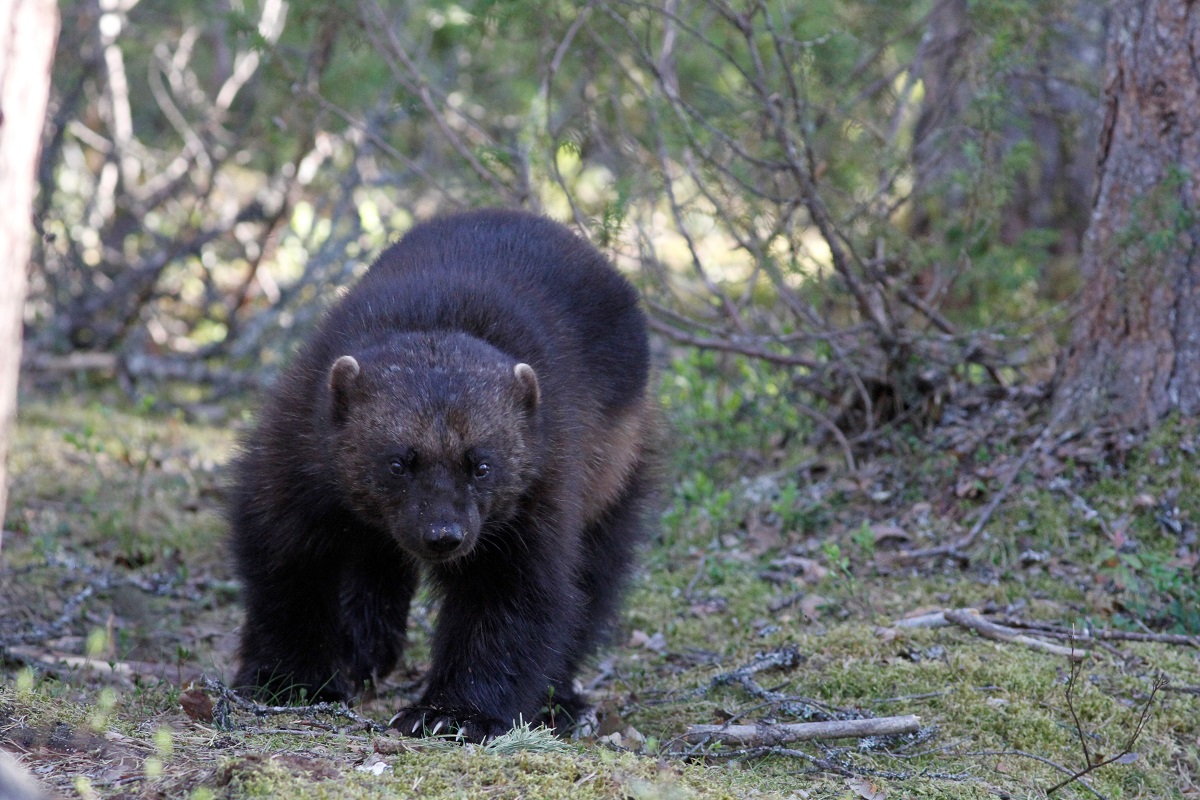 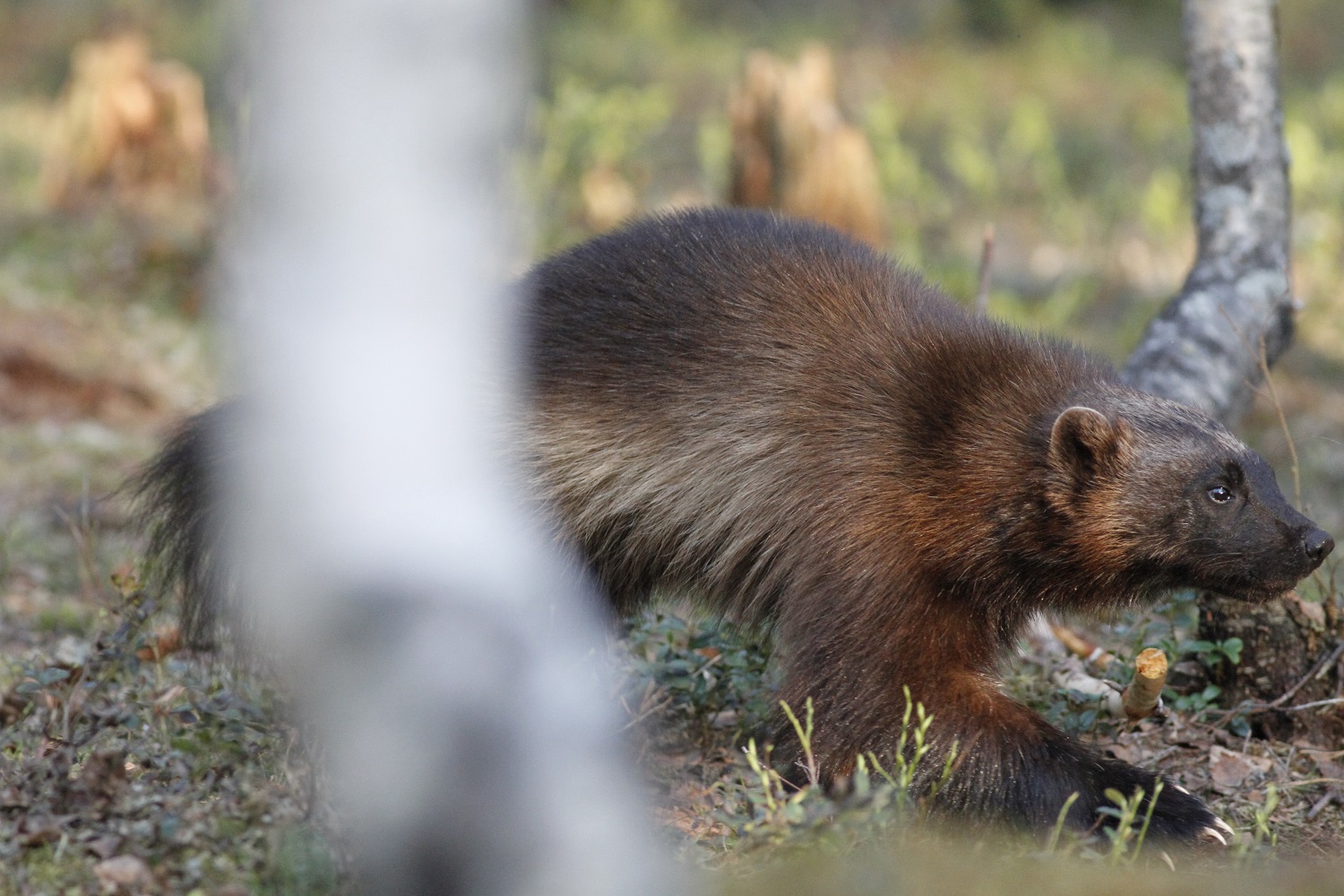 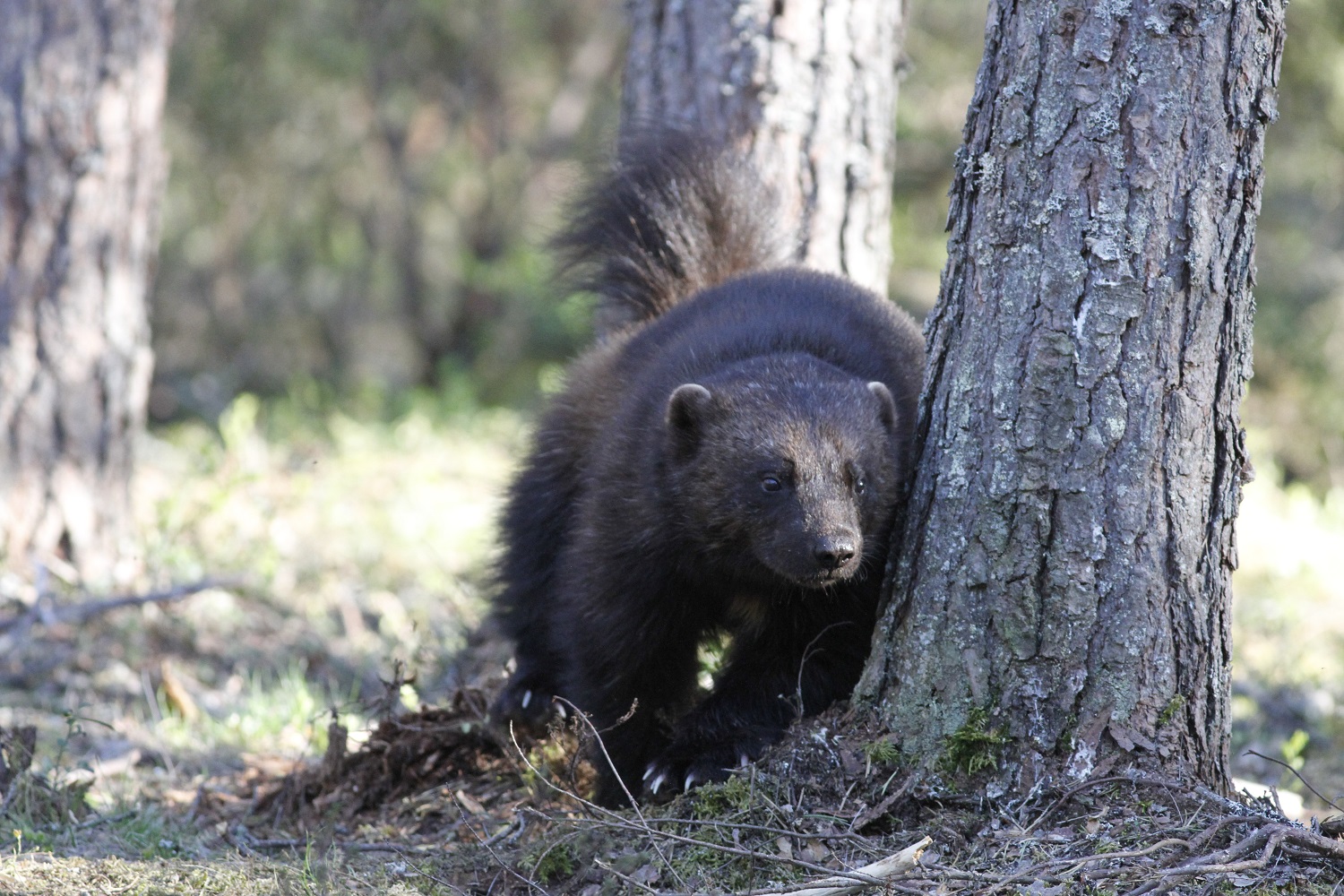 Given their presence near the hides it’s always a pleasure observing wolverines in this unique way. Also, after a decade of guiding these type of tours in Finland, Jan knows several bears, wolves and wolverines by (nick)name, physical performance and behaviour. Despite, having this experience, the set up is never the same as to who and when will perform on the taiga stage. It makes the hide sessions always something to look forward too. More over, it is such a privilege to be present in Finland’s wild ‘no man’s land. 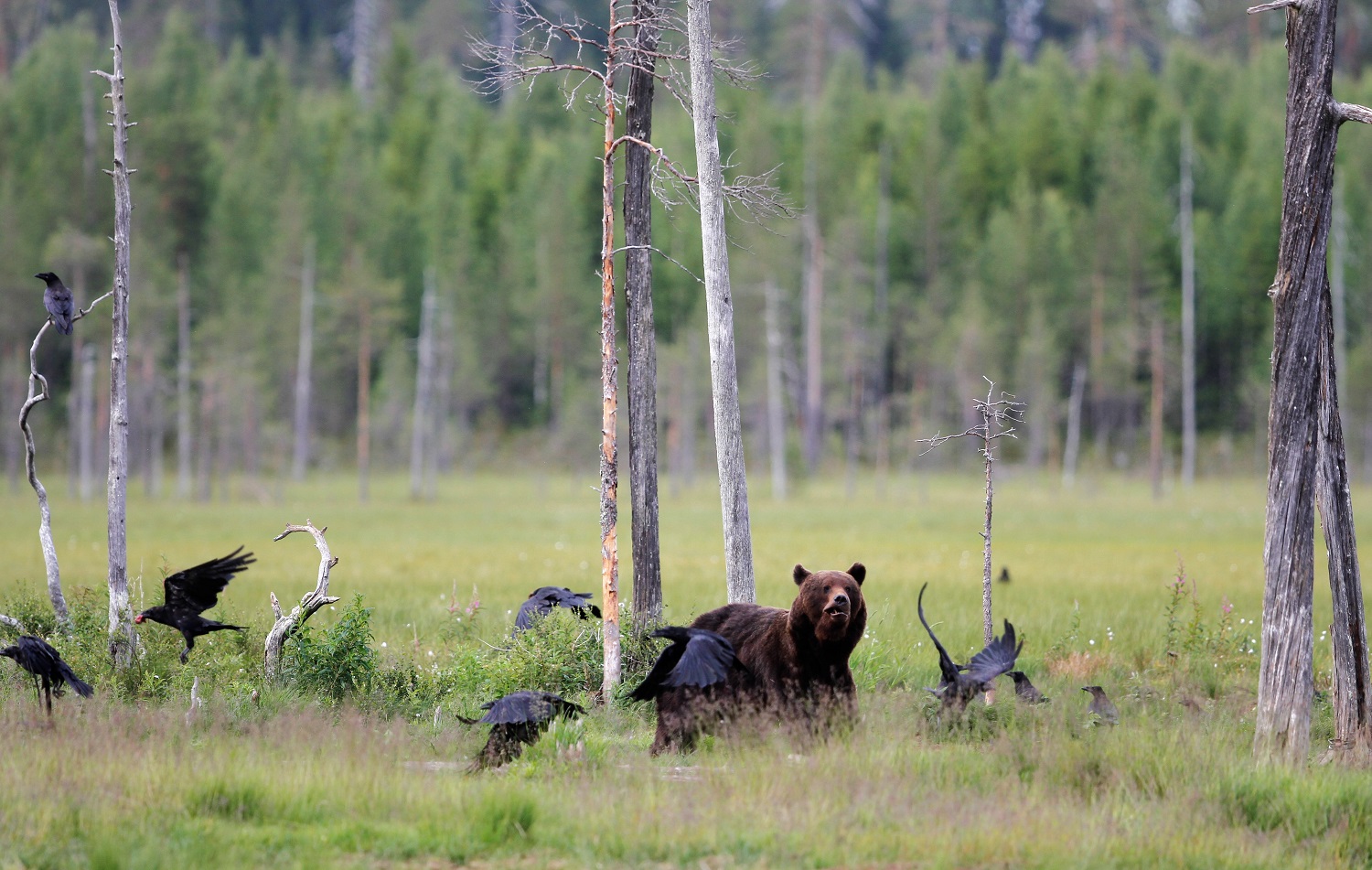 This no man’s land is roughly the north/south international border between Finland and the Russian Federation. Some 1340km long, it runs mostly through uninhabited taiga forests and sparsely populated rural areas. Especially near Kuhmo, not far from the Russian border, the Finnish no man’s land is devoid of humans. Instead, high densities of predators such as Brown Bears, Wolverines and Wolves, find a place to live and roam freely.

Spending a night inside a hide in such an area reaches deep inside. It puts you in a place you rarely find yourself today away from all noise and disturbance of urban living. Instead it’s the throaty calls of  Ravens breaking the silence here especially when the Brown Bears tear apart the newly laid bait. Only during the short period of twilight, that passes for night here in the summer, do the Ravens become silent. Aside from the distant sounds of chewing bears, the stillness of such a vast and desolate place is just beautiful and a privilege to experience.

The 2019 trip was exceptional in the way that all three carnivore species appeared in front of one hide during one night. It was actually a coming and going of large carnivores from early evening into the night until next morning. A fantastic wildlife spectacle that has never happened before!

So, hopefully, by reading the text below, you will get an idea of the unique atmosphere that only happens in these kind of hides in Finland. 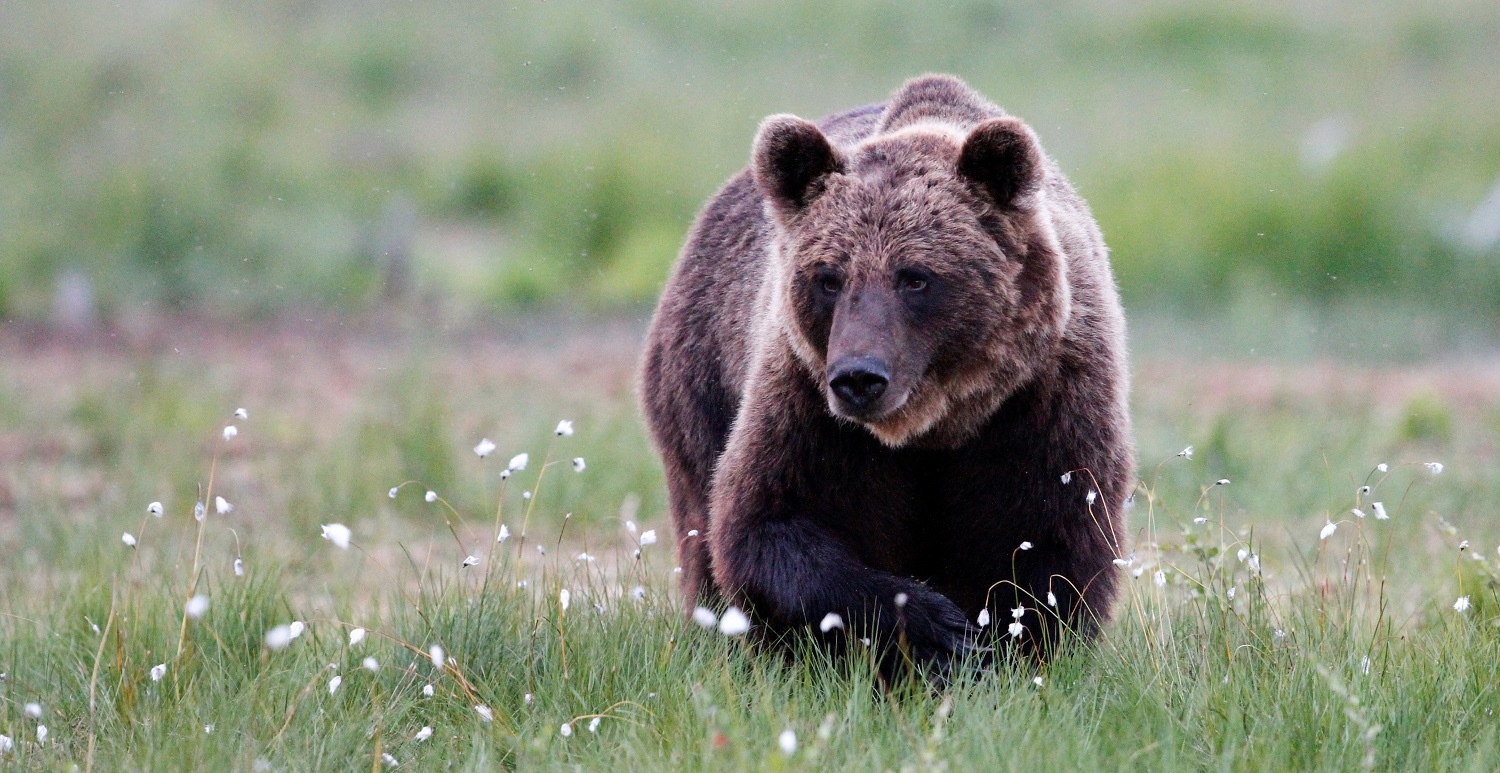 It was a bear first of all that trotted along the edge of the bog,  from left to right, well back from where the hide was situated. Being just 18.04 this happened only 45 minutes after we entered the hide! Jan pointed out where the bear would pop up next. Correctly, the same bear came in from the right 10 minutes later. This first dark individual went straight to the carcass to eat for about 20 minutes. So, at 18.34 the bear left the scene. Although it was clearly disturbed by something, surprisingly no other indiviual showed up straight away. An opportunity for the resident flock of Ravens to take over the scene. Feasting on the newly ripped open carcass, they were joined by a single Black Kite and three White-tailed Eagles. All species doing the same – trying to grab their piece of the buffet. 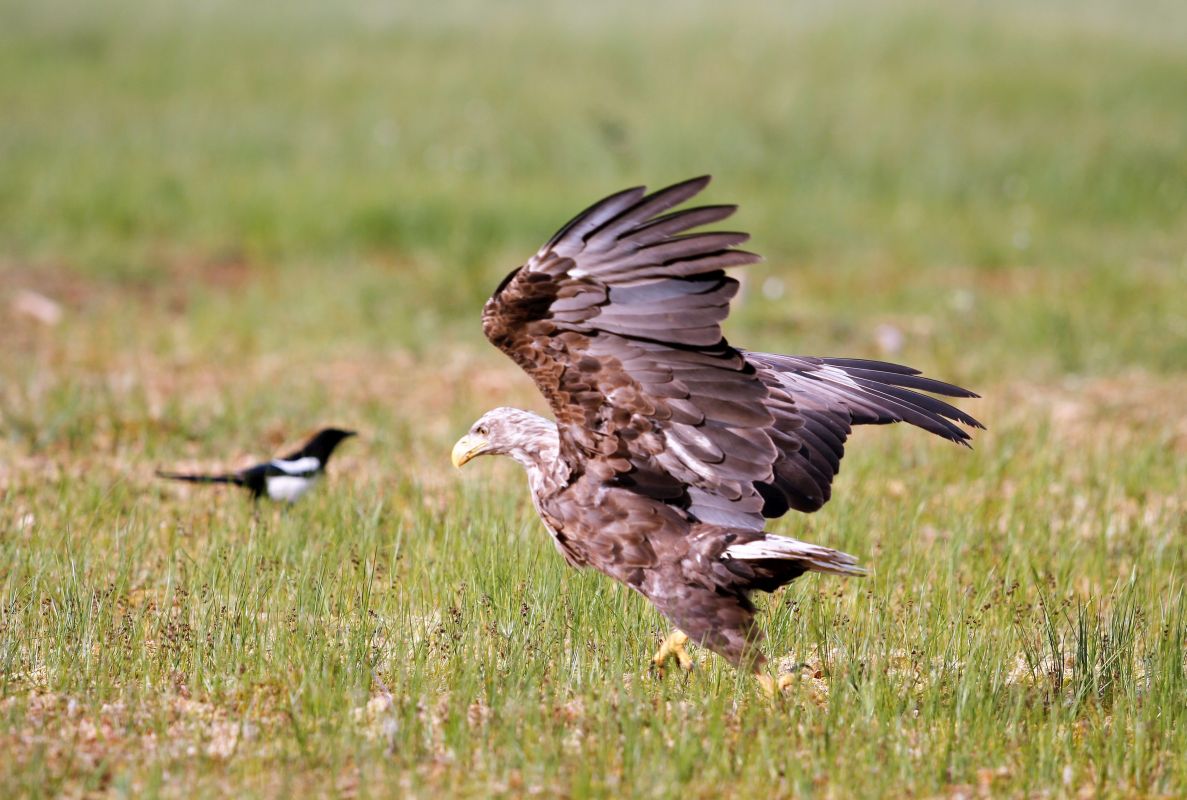 Then a new arrival, this time an adult Wolverine, came from the back of the hide at 19.14. The world’s largest member of mustelids also went, like the bears, straight to the carcass where it was present till 19.34. With the appearance of a young Wolf at 20.00 we scored all three large carnivores within two hours!

The immature Wolf left the scene as soon as a 2nd different adult bear appeared left of our hide. At 20.45 the same Wolf reappeared but the 2nd bear left. The Wolf this time stayed until 21.14. Different to the bears, the wolf never really went to the carcass to eat. Instead it strolled around the bog where it sniffed around presumably trying to find some leftovers of the bears. At 21.30 another wolf appeared from the right. This individual, appearing rather scruffy and being more grey colored in general, wasn’t limping as the first one. This wolf didn’t stay long as at the same moment a third bear – recognised by Jan as Breadhead –  appeared from the left.

At 22.00 another and different bear joined Breadhead. As the first black coloured one also popped up, there suddenly were three different bears together on the set for about 15 minutes! 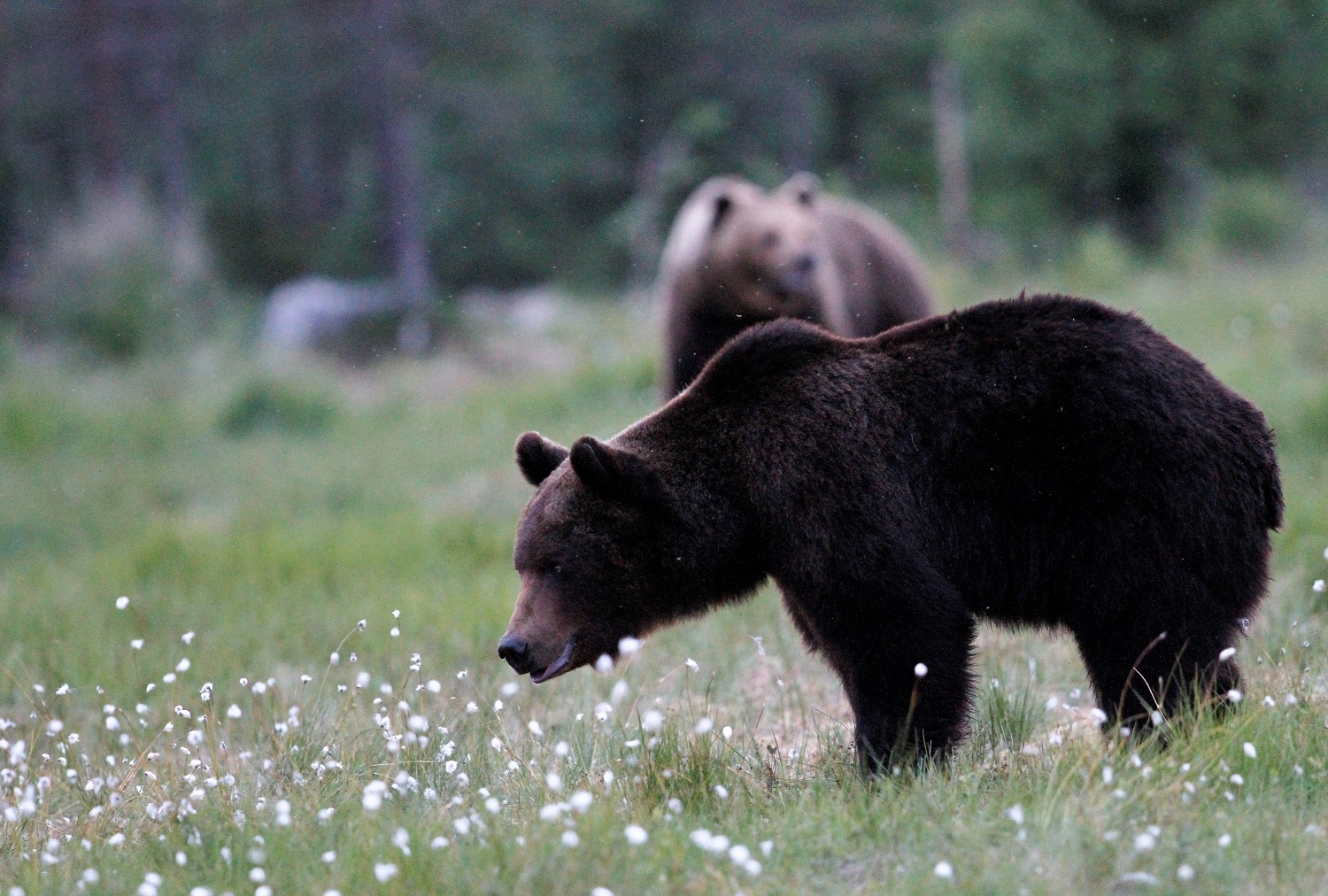 At 22.35 the limping wolf showed up again to be joined by the other one at 23.00. Soon both wolves trotted off together, as they appeared relaxed with each other they were probably two non rival youngsters not interested in defending food or a territory for themselves. During the short period of twilight around midnight most of us got into our bunkbeds to rest for a couple of hours. It was actually only Andrew who kept an eye on the scene. The first wolf and the first bear kept him awake!  At 04:00 again a Wolverine appeared near the carcass for about 15 minutes as did the first bear again at 05.15. At 06:00 another Wolverine came in only to leave in the end carrying off the remaining leg of the carcass! For sure a constant variety of animals and a splendid night of wildlife watching!