Saturday, the 28th of February  2020, Andujar – Spain. Our daily gathering takes place at the only available table in the dining room of our host’s accommodation. The small scale rural hostal – our base during a one week Iberian Lynx quest with a focus on photography – is more or less exclusively ours. Besides a couple of close friends of the owners, the en suite rooms are for Jan, accompanied by his group of four wildlife enthusiasts. The breakfast is, as usual, simple but tasty. Besides the typical Spanish dish of mashed  tomatos with olive oil and freshly made toasted bread, the table is dotted with a delicious variety of local jams prepared with berries and fruits from the local gardens. To make it a bit more continental, personal plates with fried eggs are served on request. Together with loads of coffee and tea, we all feel very relaxed. Once finished, Jan goes over the usual morning procedure of getting ourselves sorted out, picking up our gear and meeting by the vehicle.

Knowing all the surrounding land is occupied Lynx terrritoties, the hunt is on as soon as we are all seated in our VW Van and driving off down the lane from our accommodation. Ten minutes later, driving on a gentle rural road, we are suddenly submerged by the vast and densely wooded Sierra Morena boasting one of Andalucia’s best preserved expanses of Mediterranean forest and scrubland. Flowing through rocky hills home to cork and holm oaks, we are heading to a valley offering many lovely spots to scan the vast mountain range. Most of the resident Iberian Lynx territories are within large private game hunting estates. This soon results in close encounters with Red Deer, Fallow Deer and Mouflon.

Stopping the car to get a better camera angle, most of the deer and Mouflon we come across quickly run off. 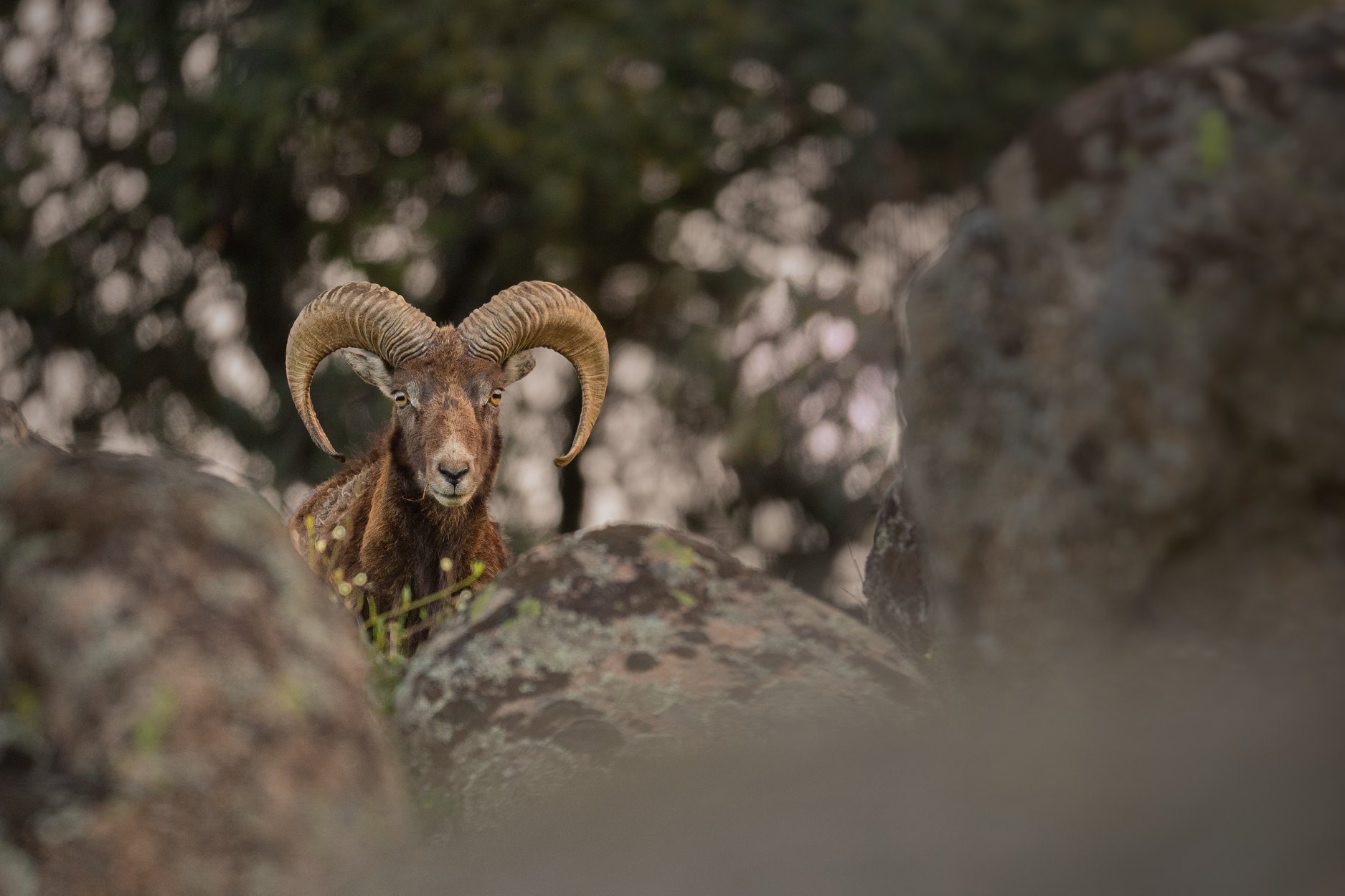 The only ungulates that requires an effort to find is the Iberian Ibex, this species is less numerous and a lot harder to find. However, we do find them as Jan knows where to look! 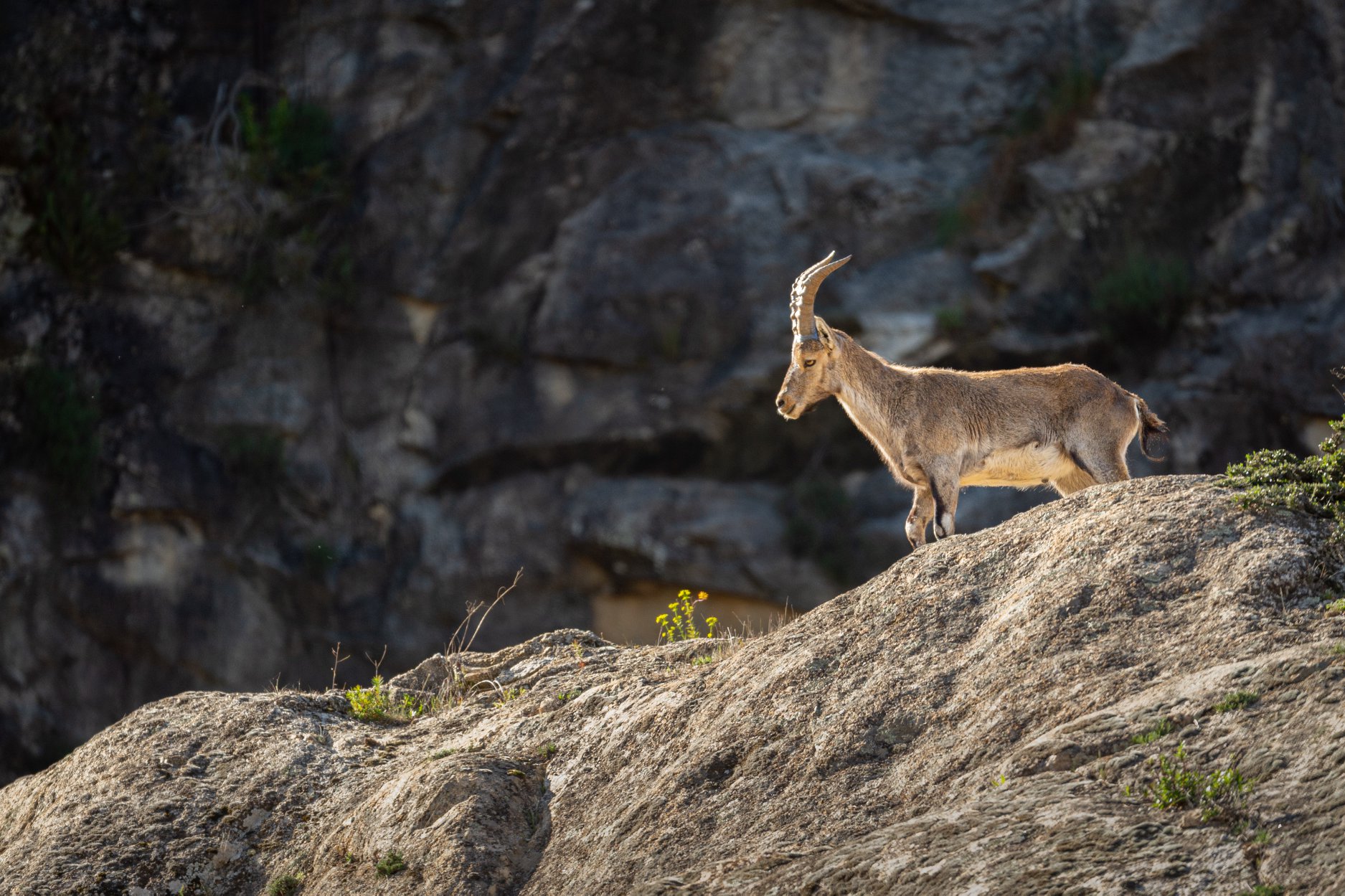 It is the abundant calling and singing of local bird species that pleases us very much. While making our way to our vantage point we are literally overwhelmed by the constant natural sound of Hoopoes, Sardinian Warblers, Mistle Thrushes, Wood Larks, Azure-winged Magpies, Little Owls, Blackcaps, Red-legged Partridges, Corn Buntings, Hawfinches, Rock Buntings and Iberian Green Woodpeckers. 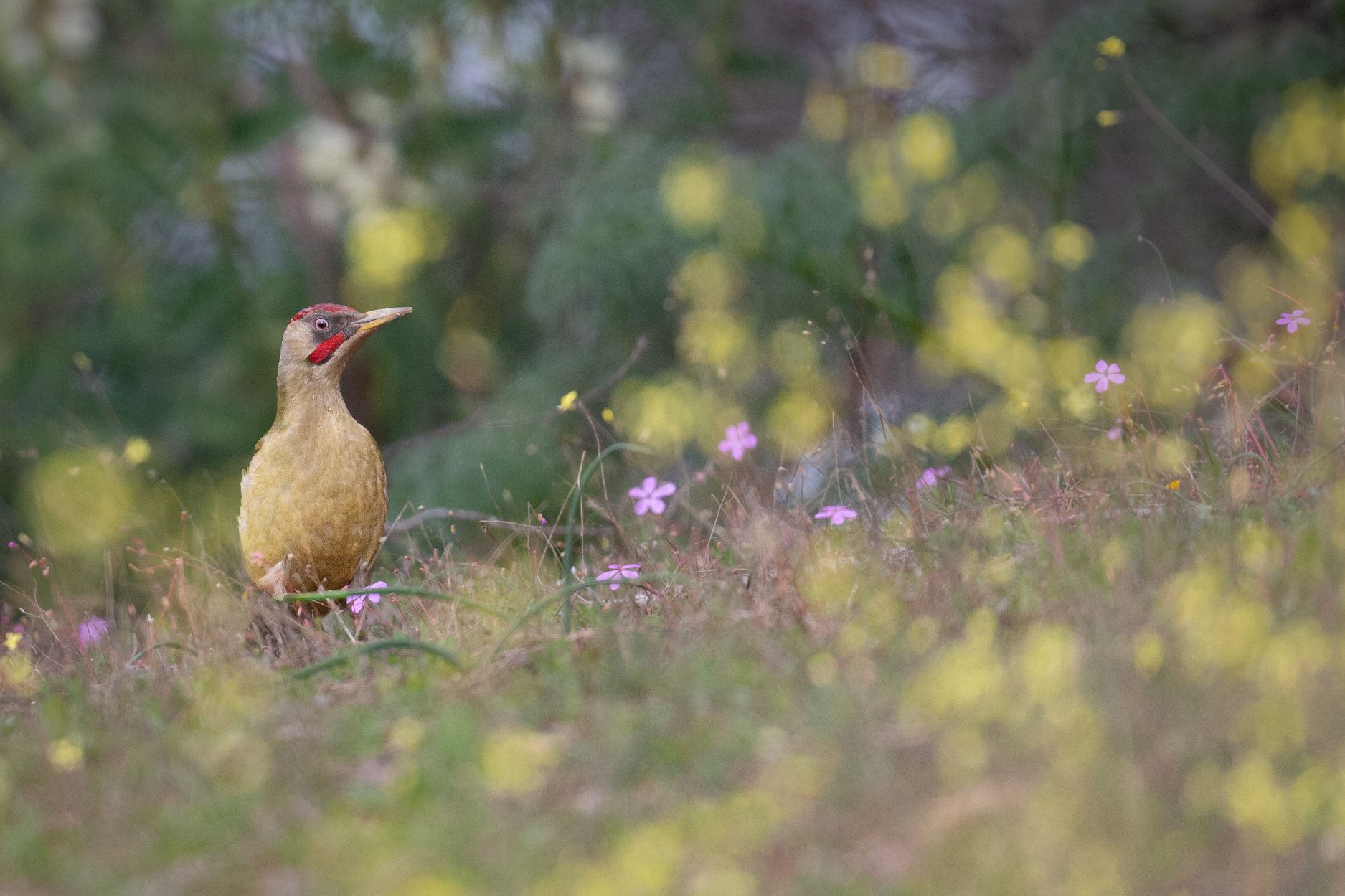 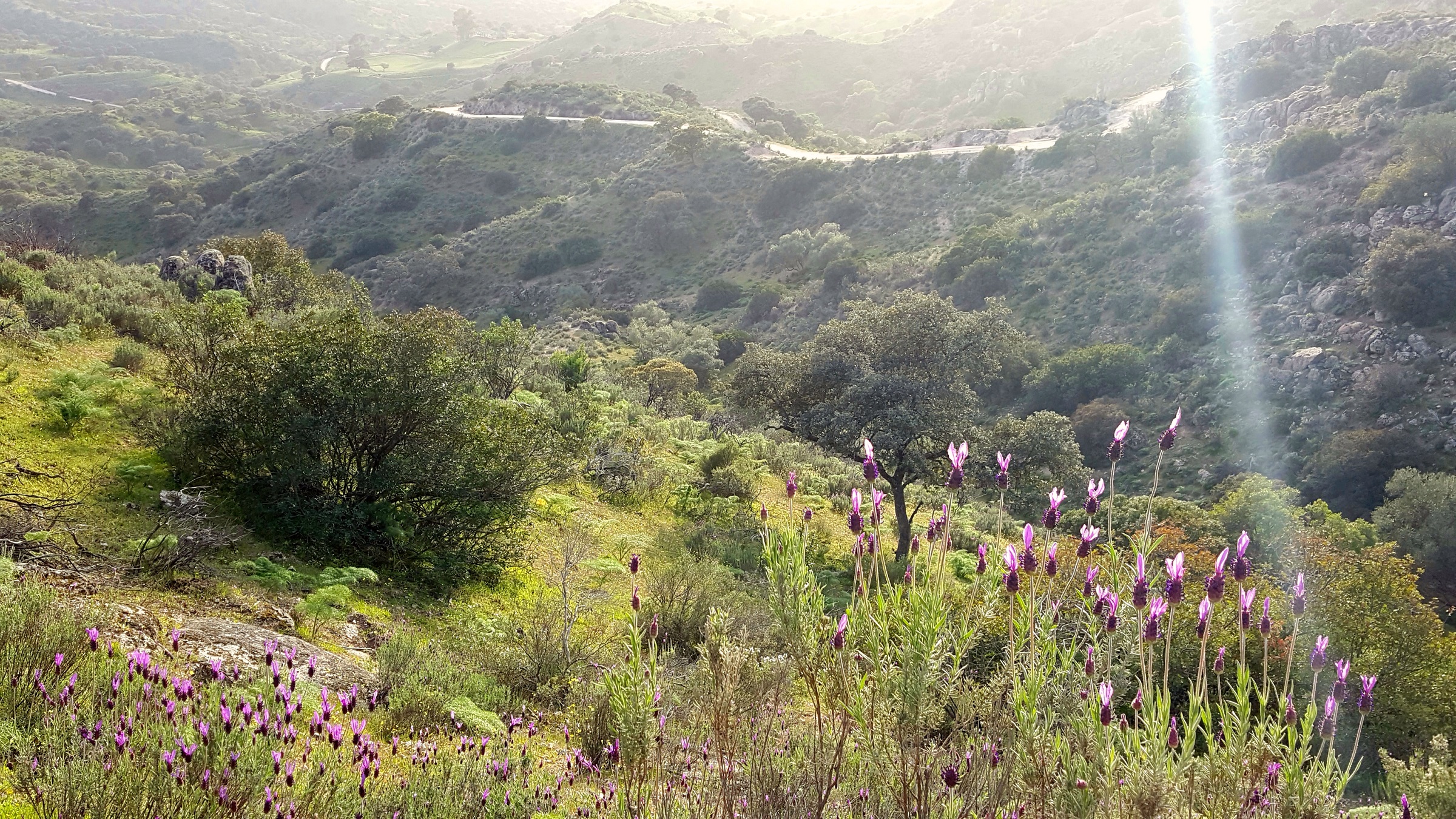 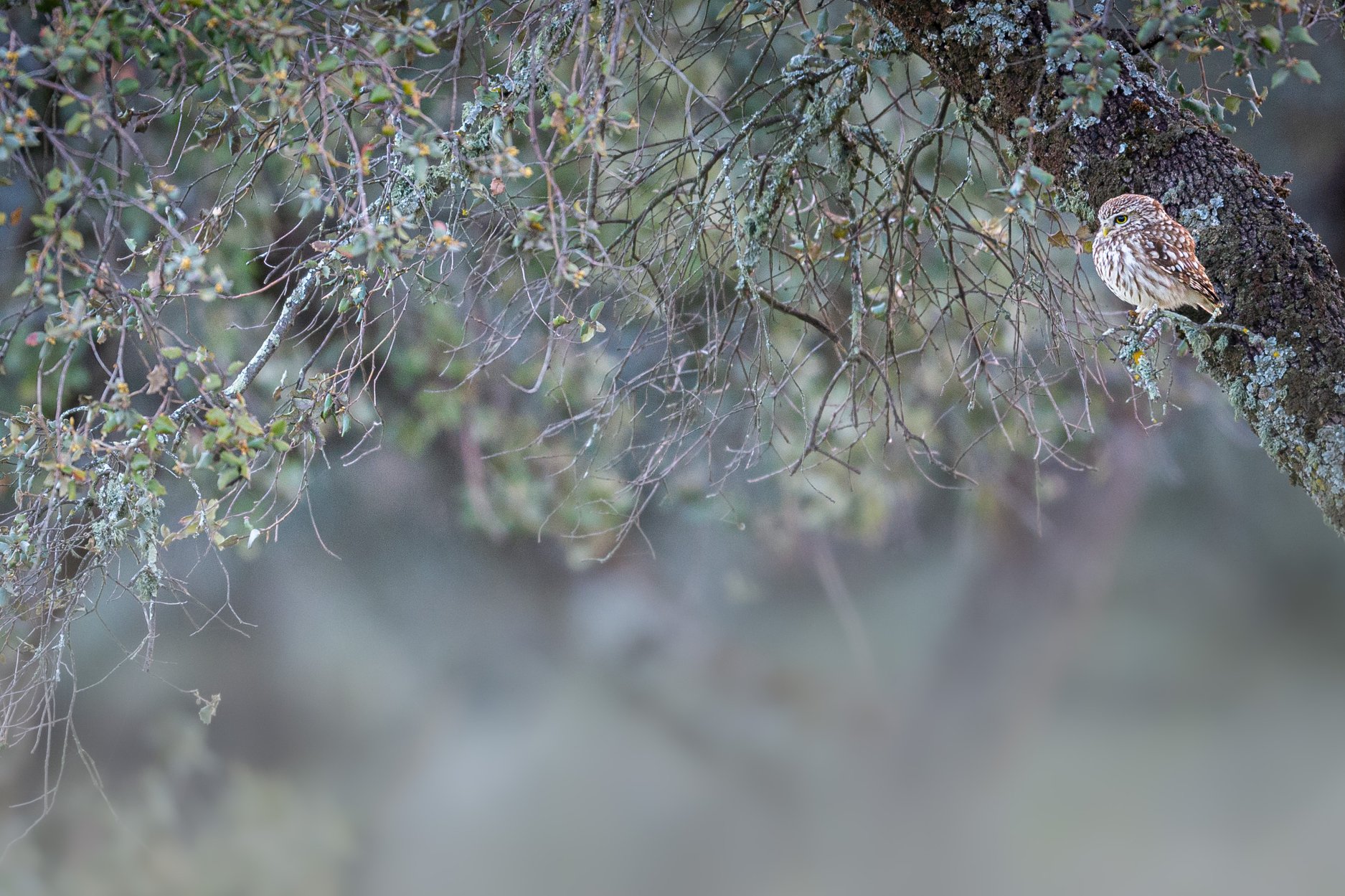 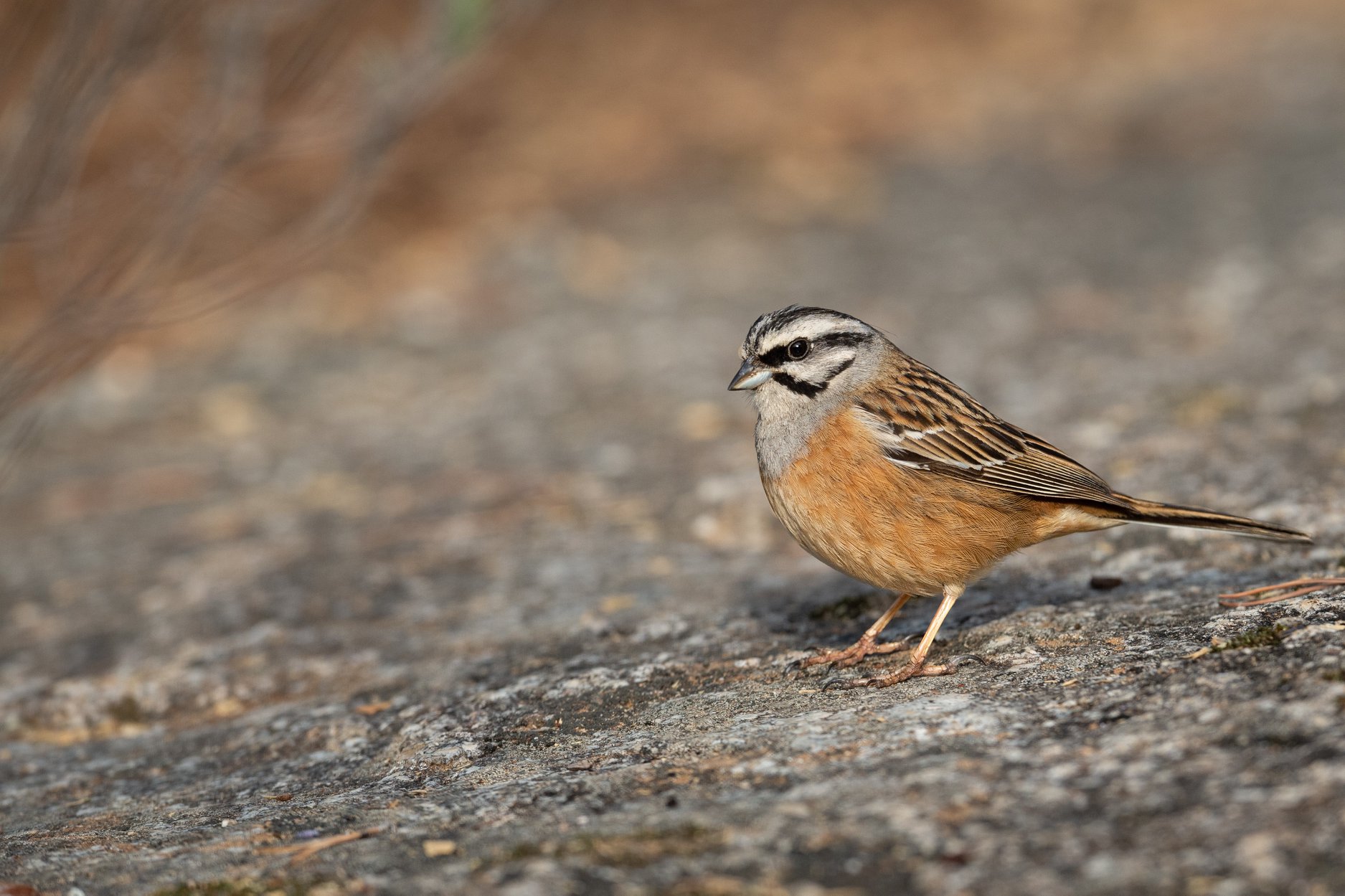 The first real Lynx stop is made, where a rocky outcrop borders a bull farm, known as the ‘Los Escoriales stake out’. The remains of a rabbit, the main food source of the Lynx, clearly shows that our goal is somewhere near, as do the pugmarks of a mid size cat species. But the target doesn’t show up. 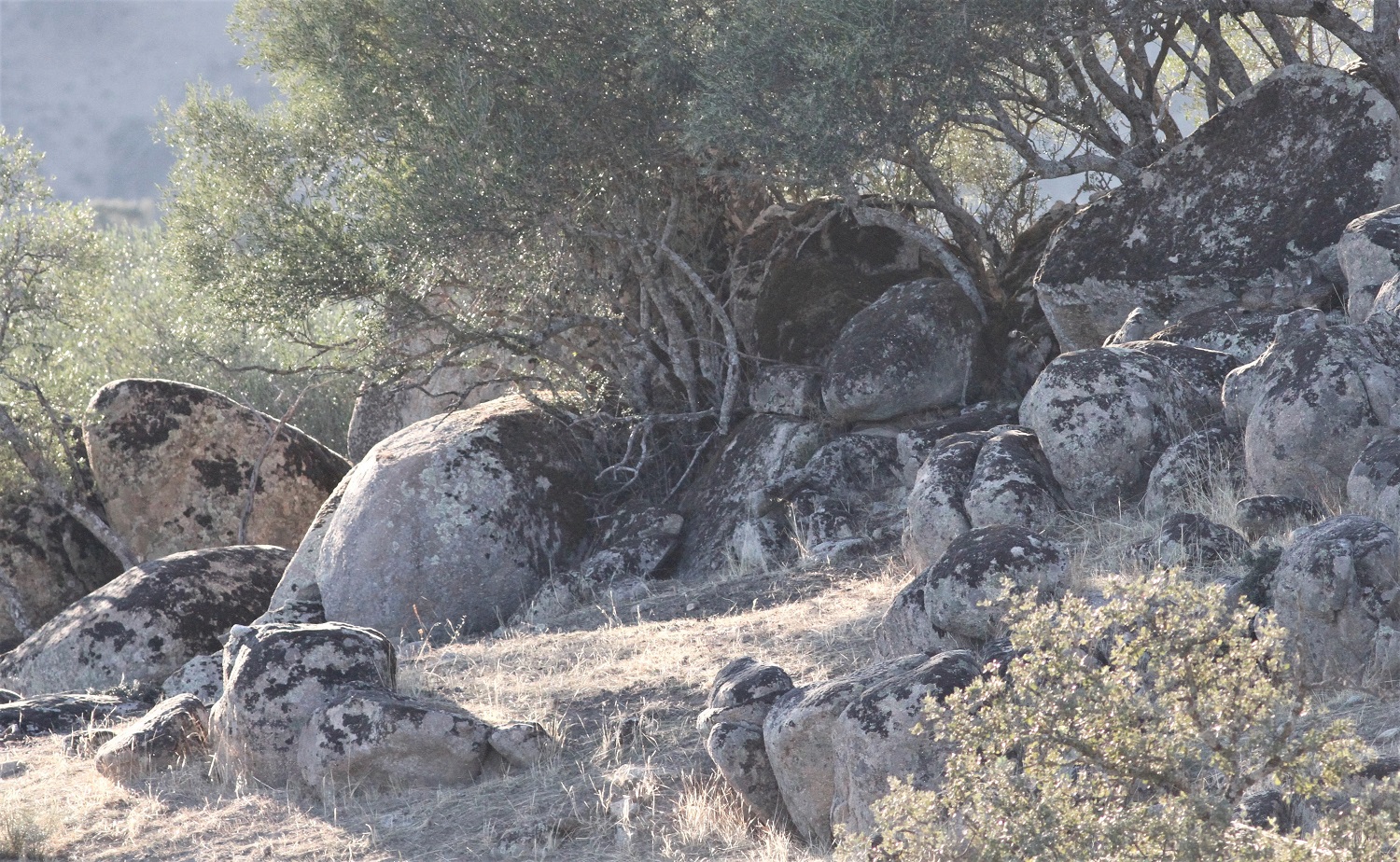 Female Iberian Lynx with kitten (yes, they both are in this picture) © Jan Kelchtermans

Last autumn Jan had a very productive time here when he lured in a female Lynx and her cub by imitating the call. Fantastic prolonged views in the spotlight were had for sure! 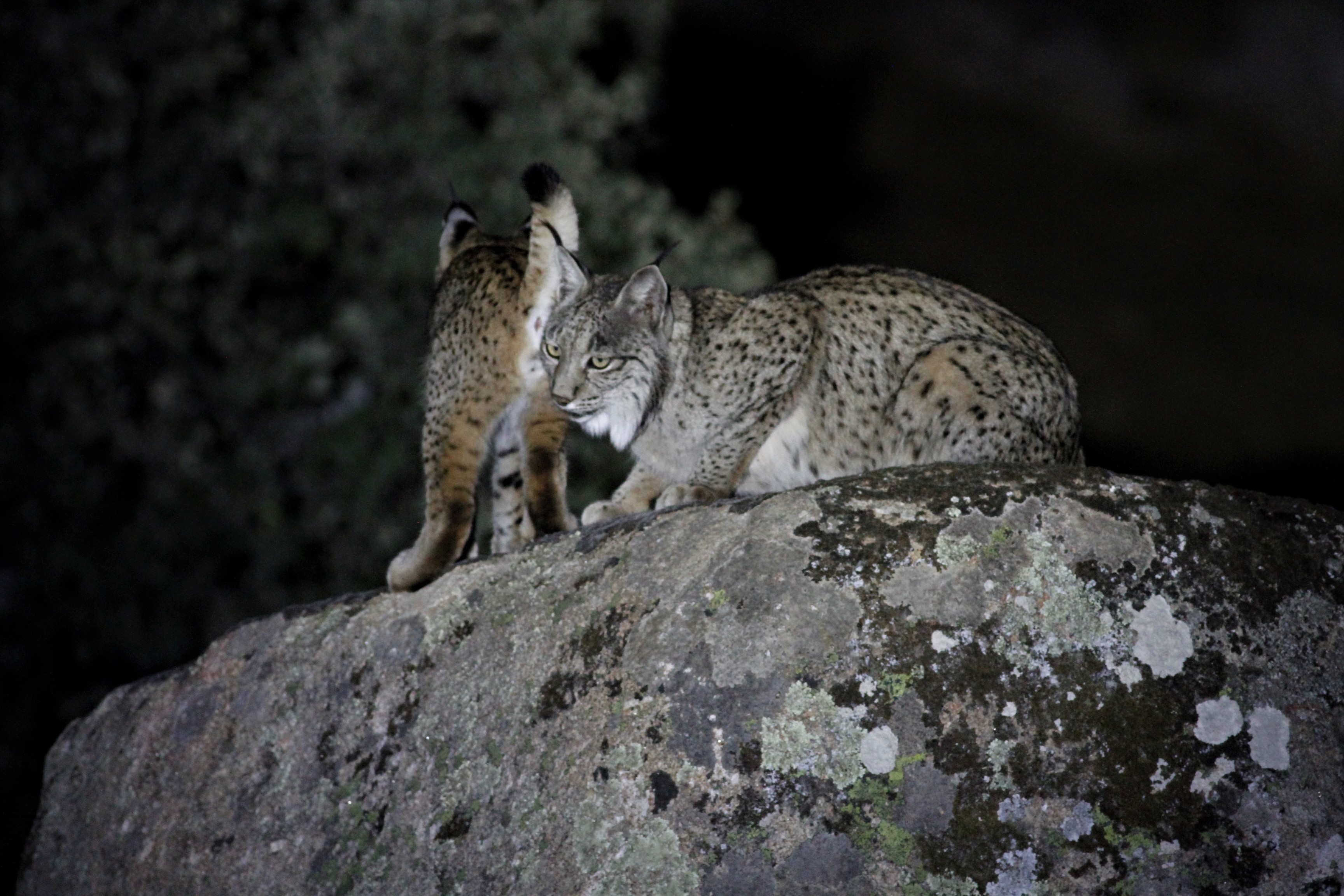 In another previous encounter, on the same road a bit further on, Jan had witnessed a Lynx killing a young Fallow Deer. 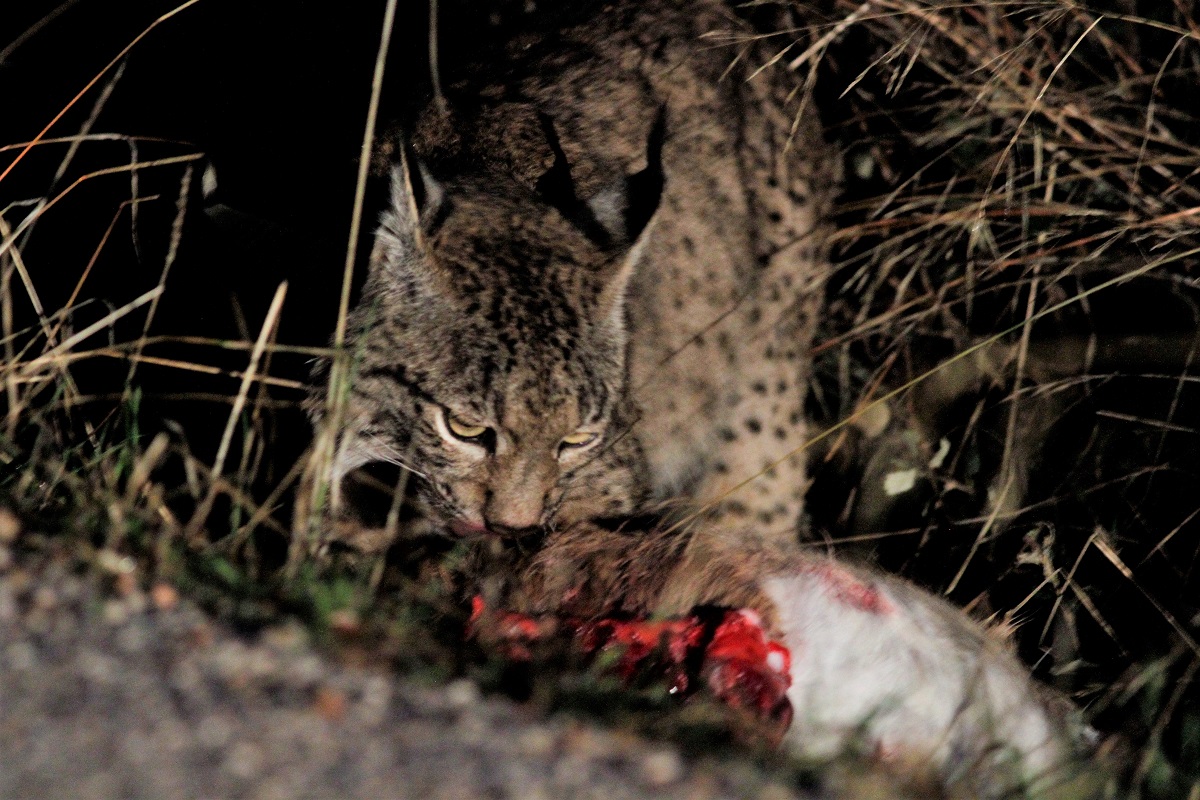 Once we reached the well known ‘Lynx valley’, we pulled in to a particular spot close to an active rabbit colony.  A hunting Lynx had been seen in this location a few days before. Though Iberian Lynx aren’t really concerned about human presence in their core areas Jan reminded us not to slam doors, walk as silently as possible and to whisper. Keeping a low profile definitely increases our chances of a Lynx sighting as animals in stealth mode are sometimes very aware and hard to spot. As wild animals don’t have an exact feeding time as they do in zoos a hoped for Lynx appearance didn’t happen. As the day wore on, we continued our stroll along the same road, using the wooden made vantage points recently built in the area, to continually scan the hillsides for Lynx. Moreover, Jan explained the rising temperatures at this time of day should result in the appearance of raptors taking advantage of the thermals. Quite suddenly large numbers of soaring Black and Griffon Vultures appeared over the nearby hill tops proving Jan right. 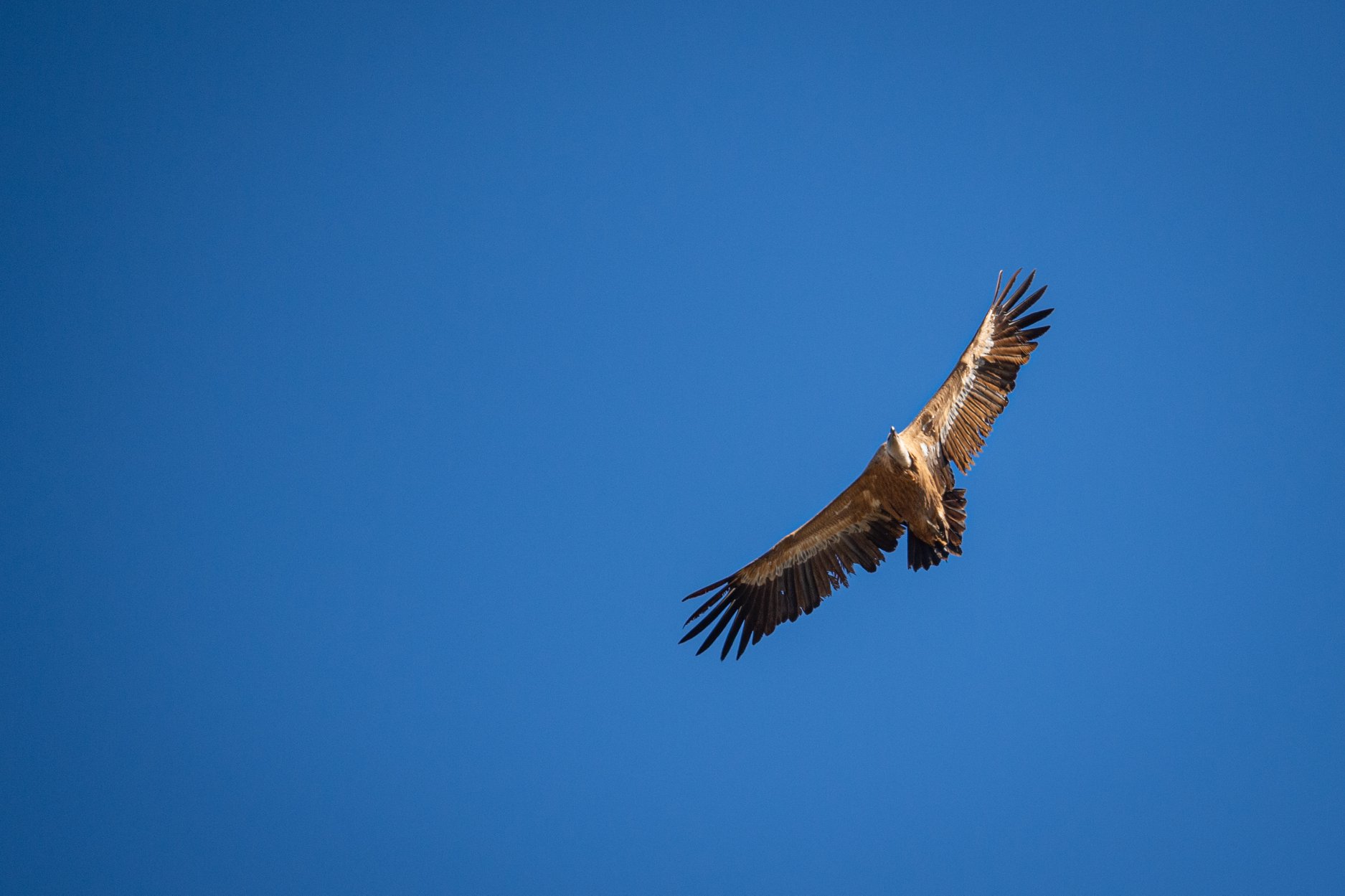 After taking a number of flight shots of the raptors we continued our stroll on the same gravel road, constantly aware of likely Lynx nearby. Jan, having visited the area for more than a decade, knows that sooner or later you hit the jackpot here. As it was a Friday, more locals would be using the road. A local mountain biker, returning from the dead end road where a hydro electric power plant is situated, stops to speak to some British wildlife watchers who are further down the road from us. Interpreting the bikers gestures Jan knows a Lynx crossed his path as he was biking. We spoke to him and he showed us video footage on his phone of an adult Lynx with a cub on this road. As the encounter just happened, we all moved quickly down the road. A short chat with the Brits revealed the same mother Lynx and youngster were seen the day before more or less in the same location. Now we were all very focused in finding the Lynx. Once we reached the fence and gate as seen on the biker’s phone, Jan’s strategy was to wait there and scan the slope on both sides of the road – the lynx can’t be that far. Indeed it is as Eric suddenly calls ”it’s on the road!” The cat must have been hiding in some roadside bushes which we had just passed! 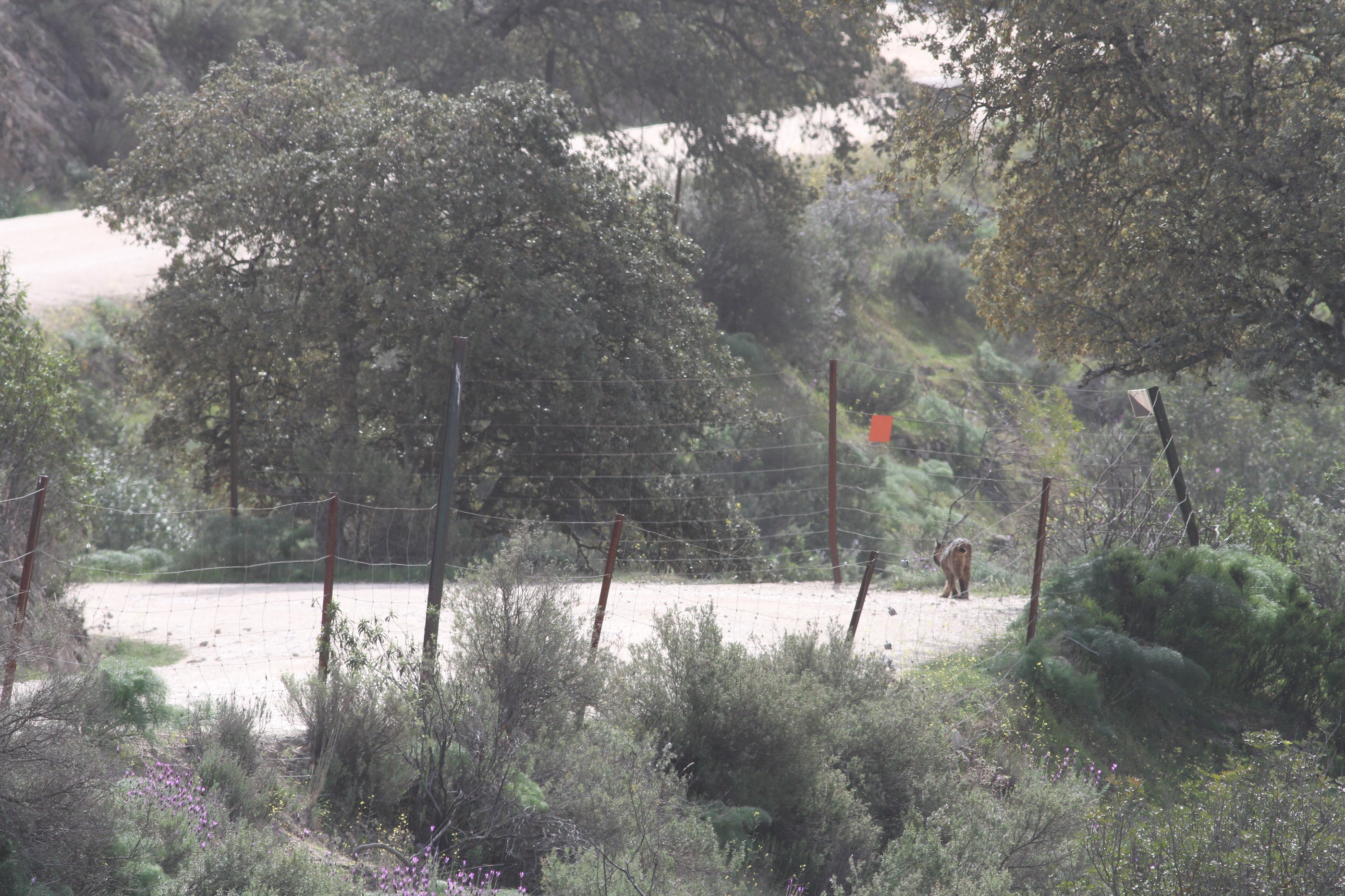 The cat which was between us and the Brits, went off road passing underneath a fence and went down the slope. Nevertheless, in a few minutes we get near to where the Lynx disappeared but we can’t relocate it. As so often happens here, these animals can vanish, in the endless surrouding landscape of bushes, gulleys and boulders. Nevertheless Jan concentrated on relocating the cat but time was ticking away and unfortunately we had no more sightings of the lynx during the rest of the afternoon. Moreover, the warm temperature and intense sunlight made it a bit difficult to keep focused all the time. Strolling on from where the Lynx disappeared, Jan heard a Lynx call three times!

As it was only briefly heard it was hard to judge exactly where the sound came from. But, with the coming dusk, the Lynx starts to call again more or less constantly. Time to let the other know. Even though we were all looking around it’s still hard to locate where the Lynx is calling from. After a nerve-racking 10 minutes there she is, a young female Lynx sitting on her haunches calling for a mate. Although too far away for taking pictures, views through the scope are just superb, brilliant and prolonged. It is remarkable that we can see through the scope the Lynx calling but the sound of the call only reaches us a second later. The Iberian Lynx identification features, which we could all see, are a heavily dark spotted tawny brown coat, long legs and a very short tail with a black tip. Most obviously it has a characteristic white ‘beard’ around its face and prominent black ear tufts. After a while she leaves her position and strolls down the slope in a very relaxed way, stopping to call now and then. She went through a fence, onto a big boulder and relaxed in a curled up position. What a view! After leaving the Lynx in the fading light of dusk we had a fly over Eagle Owl – what a lovely way to end the day in Iberian Lynx land! 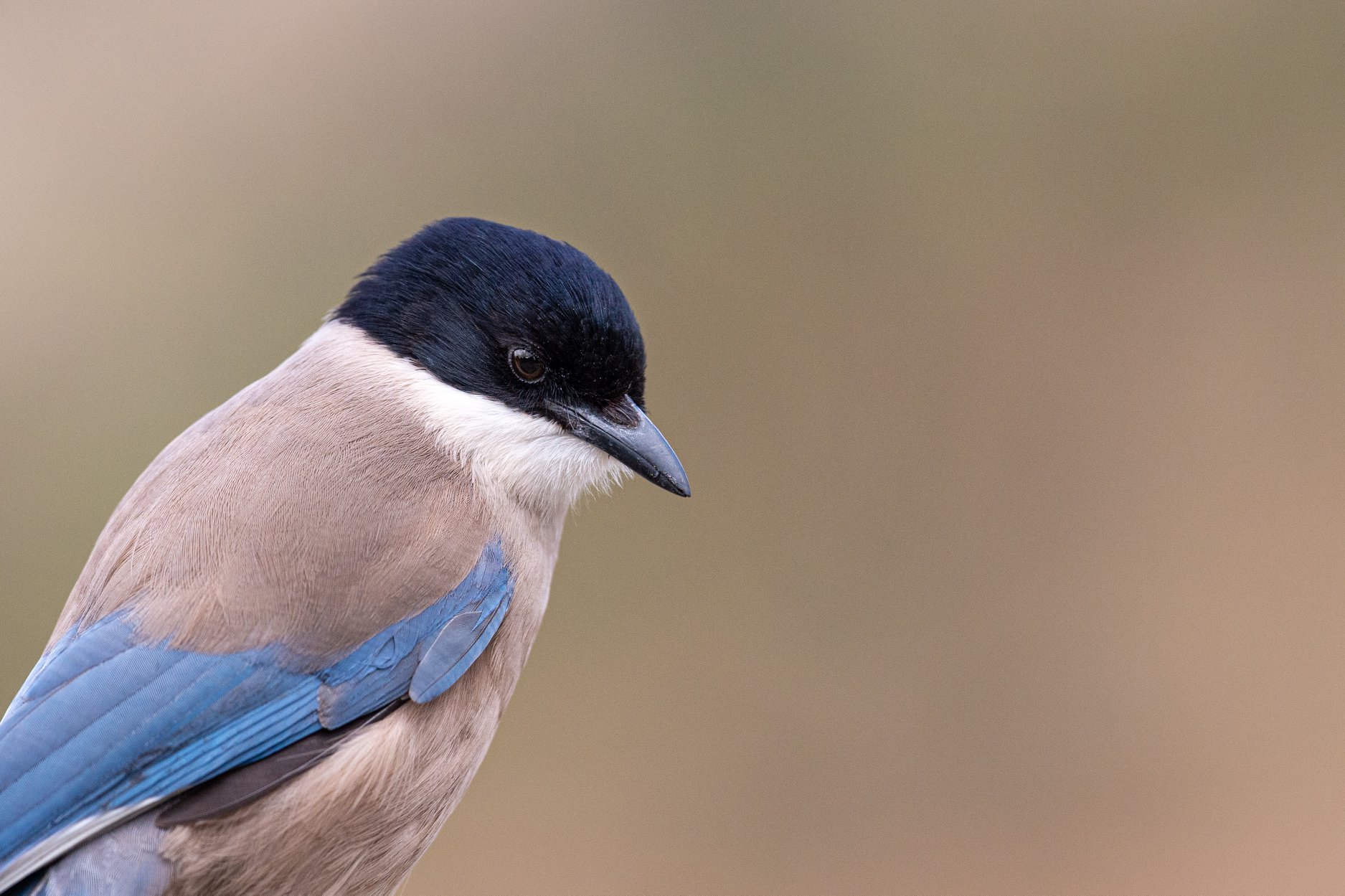