All of them can be spotted roaming freely in their natural habitat in mid-summer. Which is something of a unique situation in Europe. Despite July being generally regarded as ‘off season’ we managed to observe this most wanted trio of flag ship species in only one week this summer (2020)! By doing that, we disproved the theory that during this time of year bears do not come out of the forest, wolves are near on impossible to see near their denning area and that lynx are active only at night. So, even outside the best season there is a fair chance of spotting all these iconic creatures if you are prepared, skilled and have good optics! Of course, having a bit of luck always helps too! 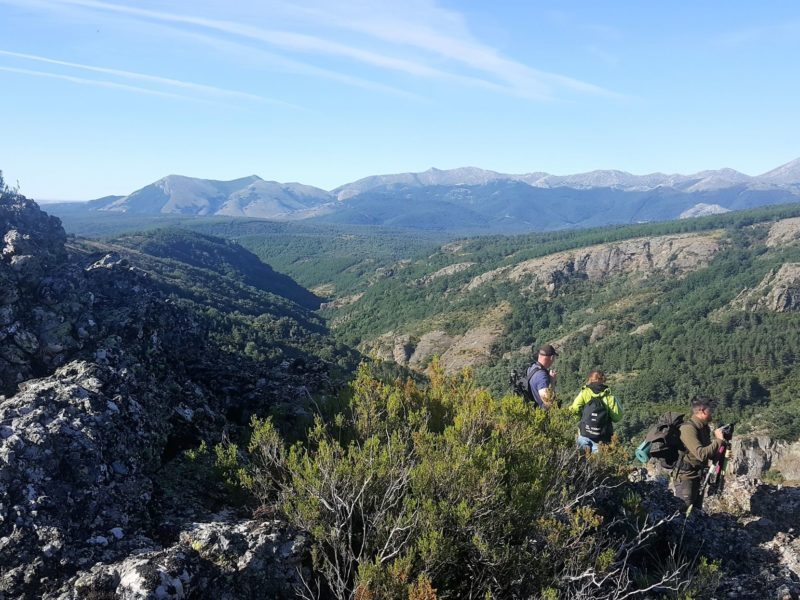 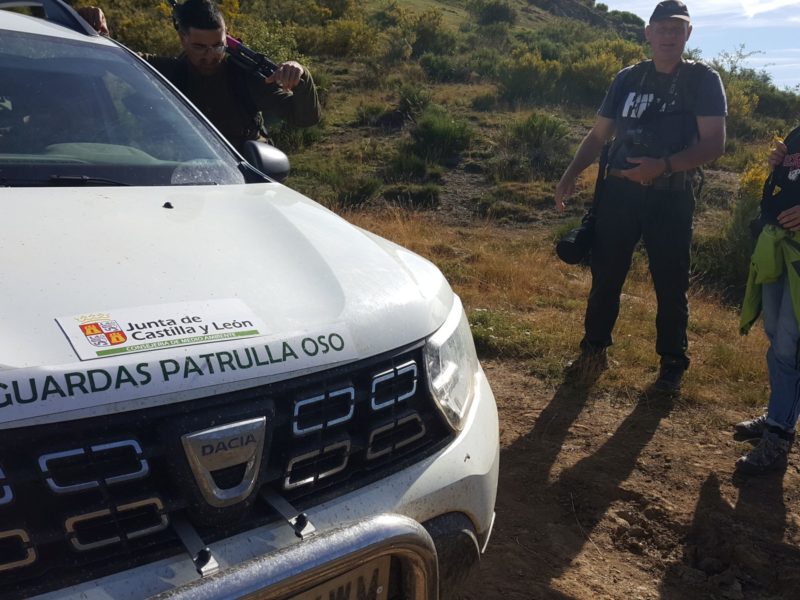 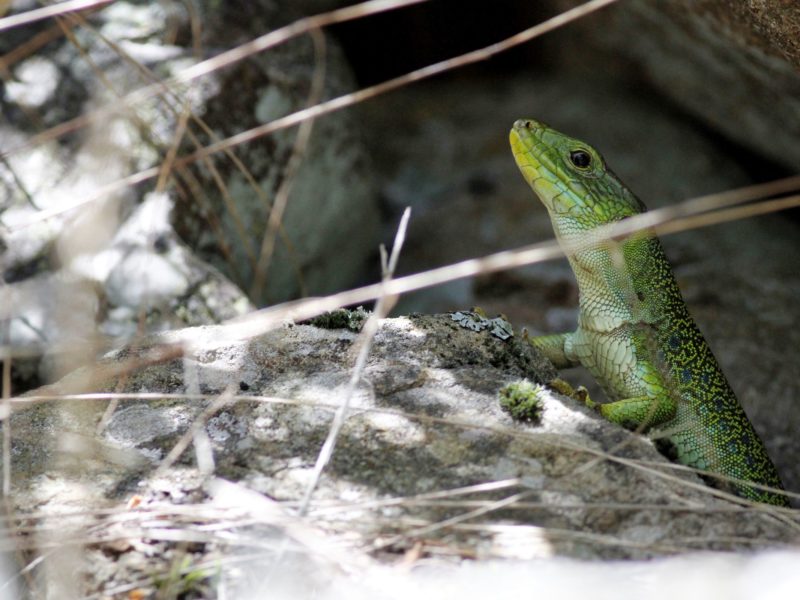 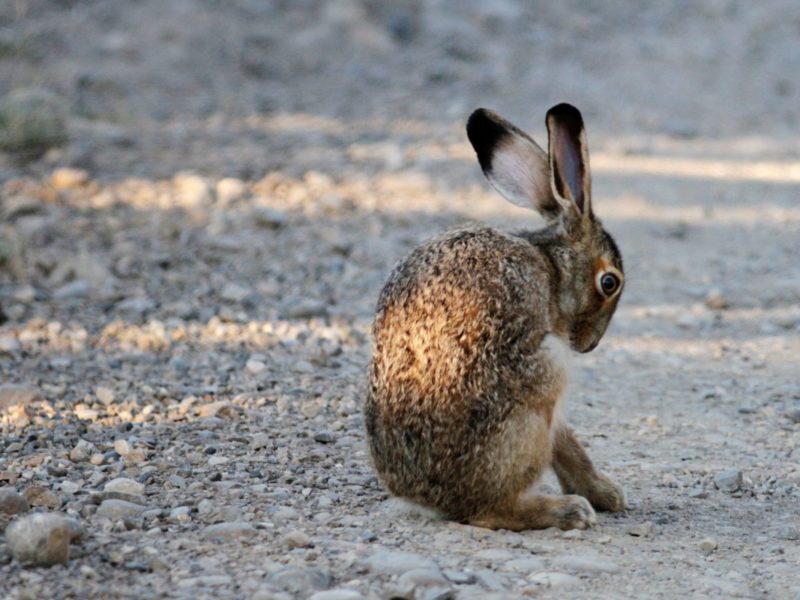 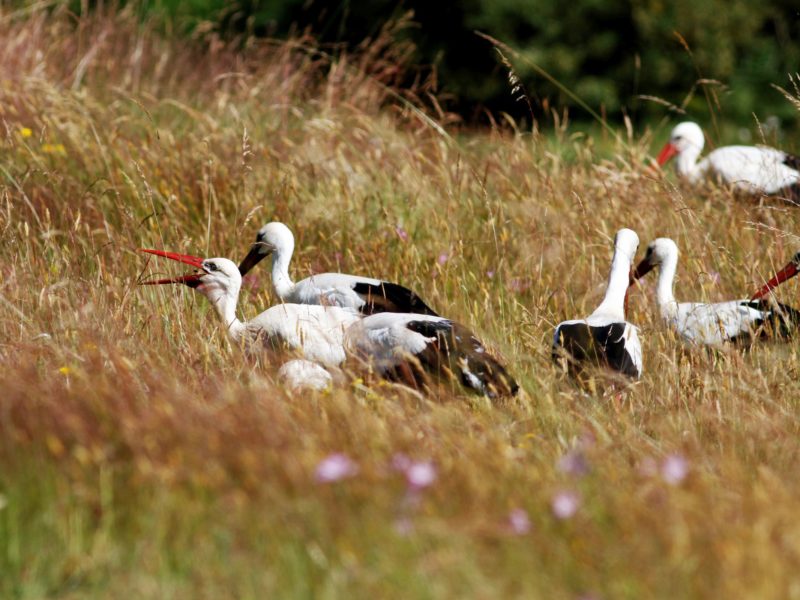 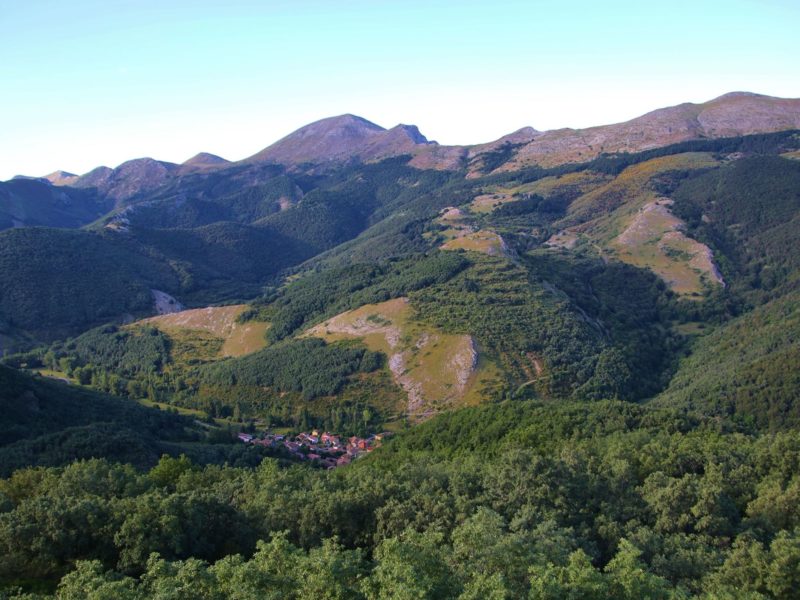 The Cantabrian mountains in northern Spain hold approximately 300 Cantabrian Brown Bears. It is a scenic and well forested chain of mountains about 300 km from east to west and 25–40 km from north to south. Although the eastern and western limits are indistinct, generally the mountain range is sharply demarcated by fractures comprising a series of high ridges rising abruptly inland into gigantic limestone mountains. Although the highest peak within the world famous National Park of Picos de Europa reaches 2650 metres, in general the average elevation of the cordillera fluctuates between 1,500 and 2,000 metres. Within this range, the bears inhabit a beautiful mixture of forest (chestnut, beech, oak and maritime pine trees) broom and heather. Below the footage is a short compilation based on observations done in July 2020. As the bears are always spotted rather distantly, digiscoping is usually the only way to obtain video footage or photos of the observations.

Based on a number between 2000 and 2500 individuals, wolves outnumber both bears and lynx on the Spanish peninsula. Besides what is a healthy population, wolves do not benefit from a protected status like both the others do. Apart from legal annual hunting based on a yearly quota, which differs in each province, wolves are illegally killed across all regions where they occur. My personal experience when talking to locals while guiding an EB5 group in 2016, is that farmers have an omerta about their wolf killing business. So, on top of the hundreds of officially killed wolves, many more are killed unofficially. The Spanish government determine hunting quotas on official population estimates although many researchers and experts question the reliability of these population counts.

Fortunately, there are associations expressing their concern about the public resources used by the government as well as the irrational decisions they make. Besides the fact this yearly culling is against legislation both nationally and internationally, it seems the situation is a political game to some. As everywhere, short-term profit in killing wolves is regarded as a better solution than long-term benefits from a balanced ecosystem. One might hope (or dream) that, by continuing collaboration of wolf loving organisations, lobbying will one day achieve a complete ban of wolf culling.

Despite being aware of and feeling uncomfortable with the above Spanish wolf hunts, we always try to keep spirits positive when in the wolf areas. It must be said we once again had outstanding and numerous wolf observations during our summer visit this year. One of the highlights took place while exploring the Fuentes Carrionas reserve, an area we had not been to before. Pointing out an immature Cantabrian Brown Bear descending from a summit in fading evening light, suddenly two patrolling wolves appeared in the same scope view. Both trotting individuals, showing territorial marking behaviour, stopping at several places to urinate and scrape the ground. The day before we had seen these territorial signs while on a walk after the morning scanning session. This was exactly where the wolves were busy with updating there territorial markings!

While waiting near a denning area in the Palencia mountains, a local showed us outstanding footage of the alfa male taking part of its kill to the female that was present near the den. A remarkable scene to watch too. Maybe the alpha male was induced to do this due to the many Griffon Vultures homing in on the wolves kill intent on stealing the meat! 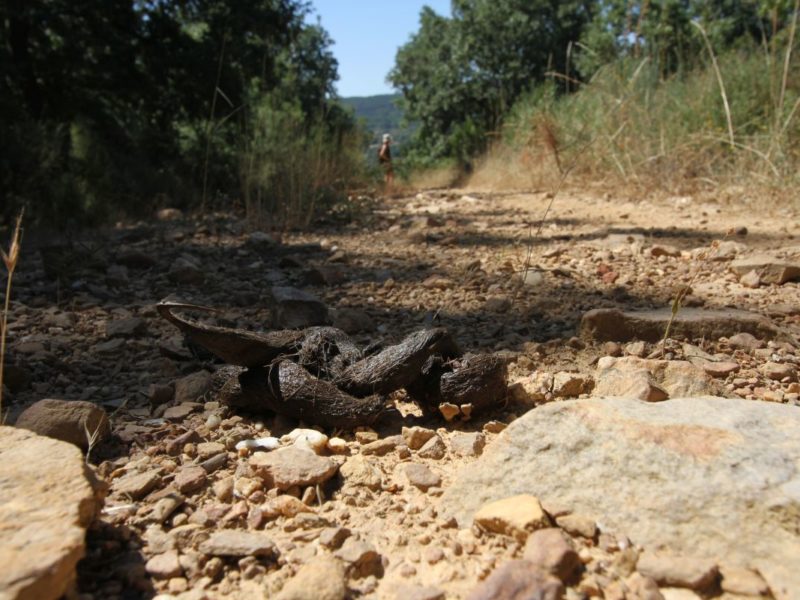 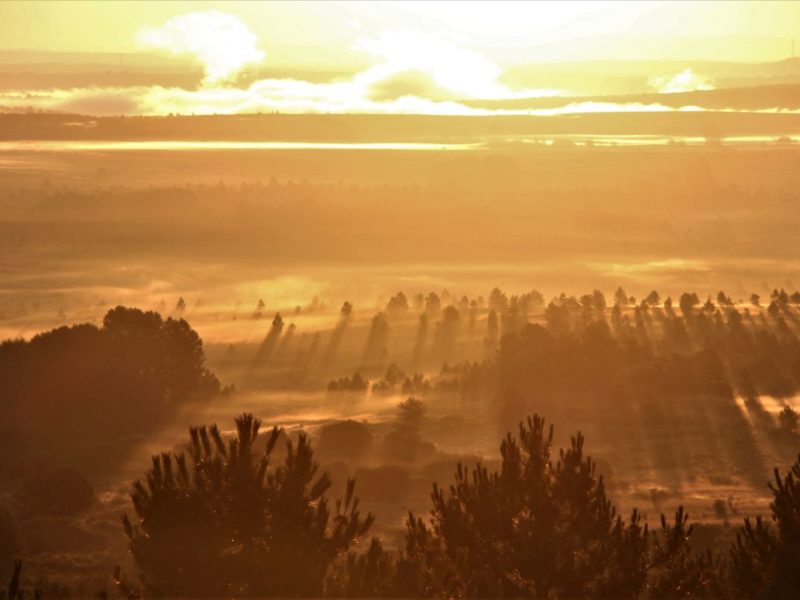 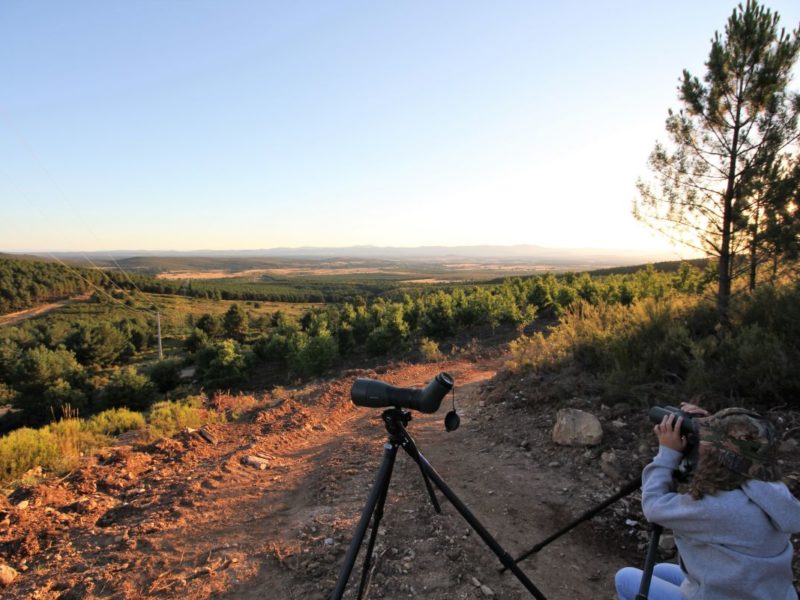 Sunset at a vantage point for wolf watching © Jan Kelchtermans 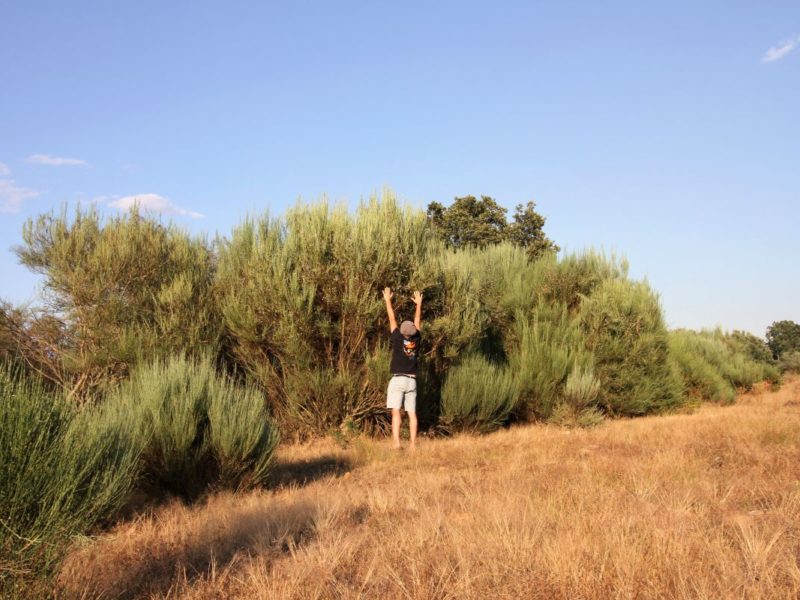 A thicket of broom vegetation: an ideal roosting spot for wolves © Jan Kelchtermans 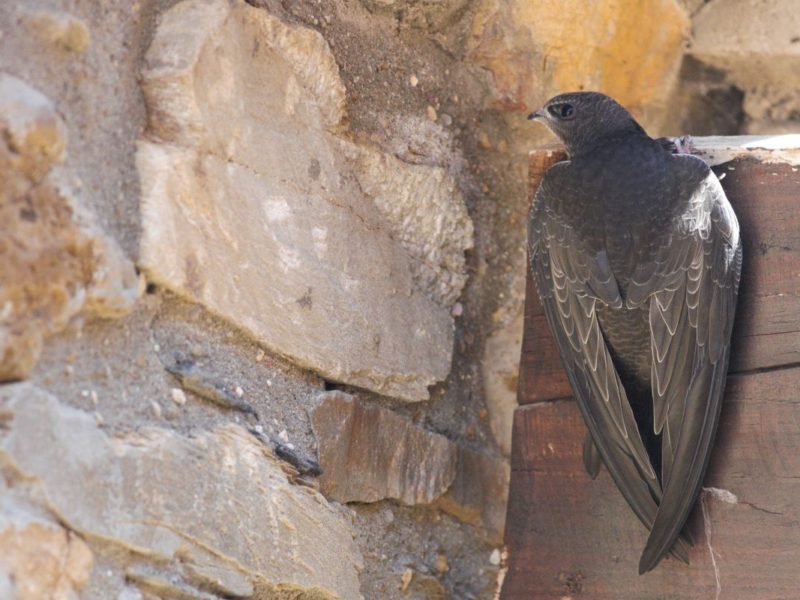 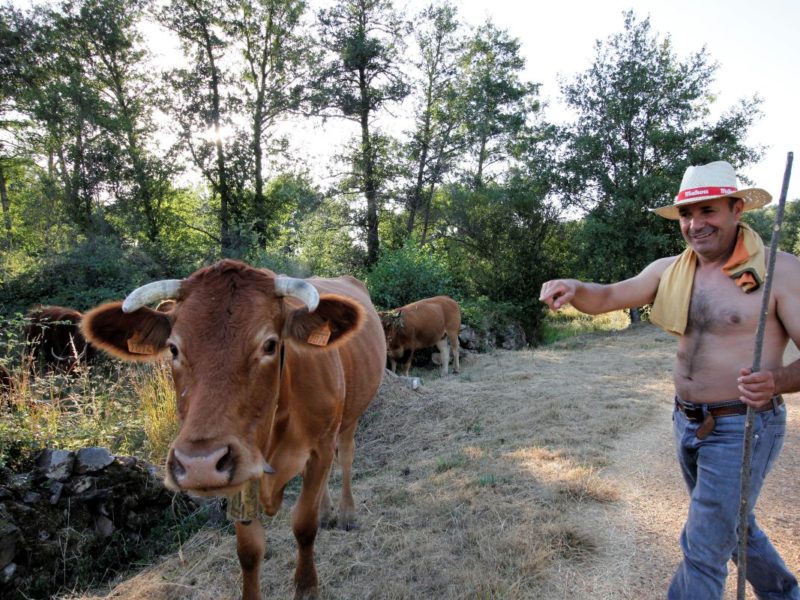 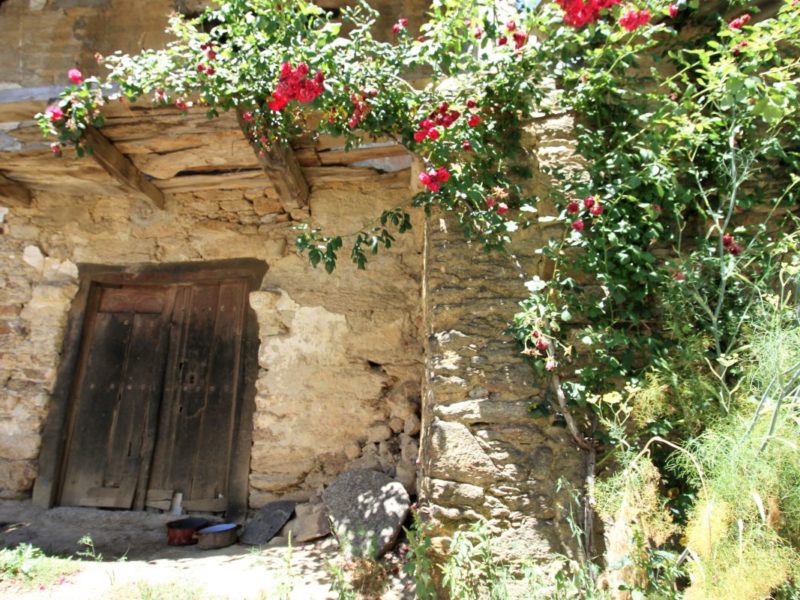 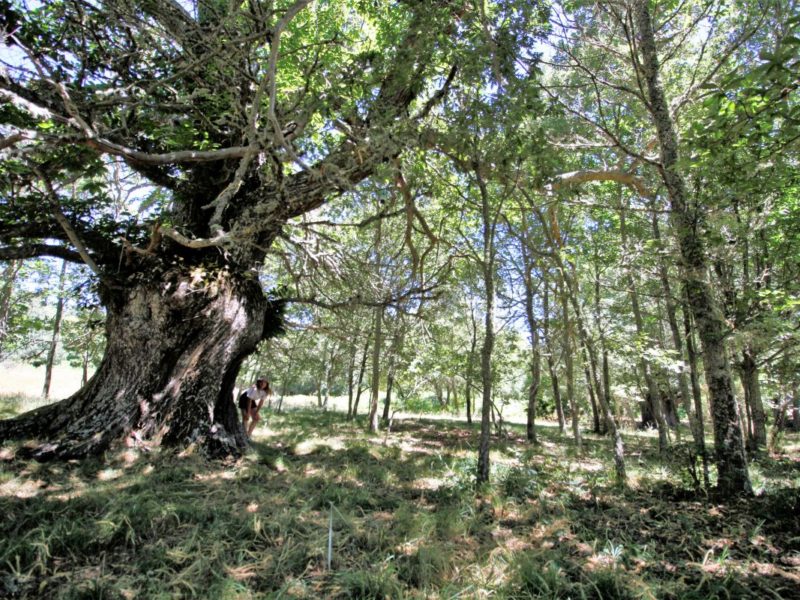 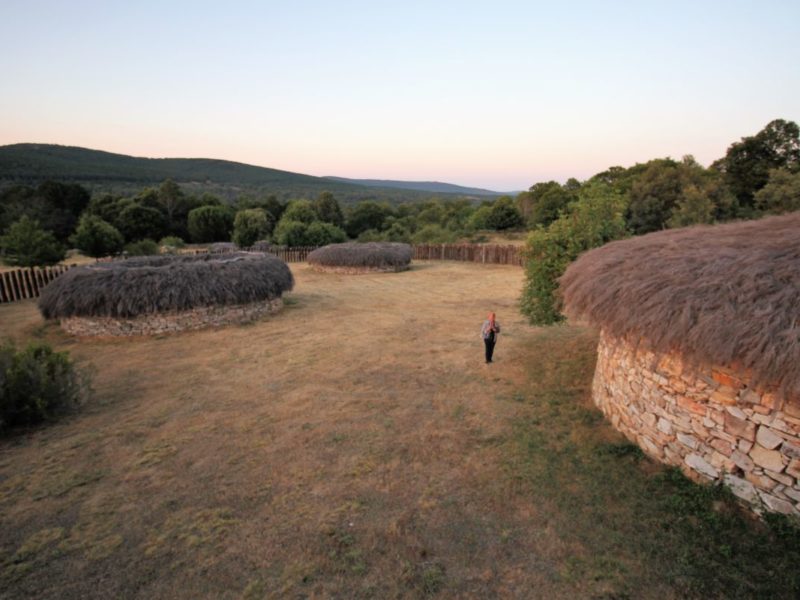 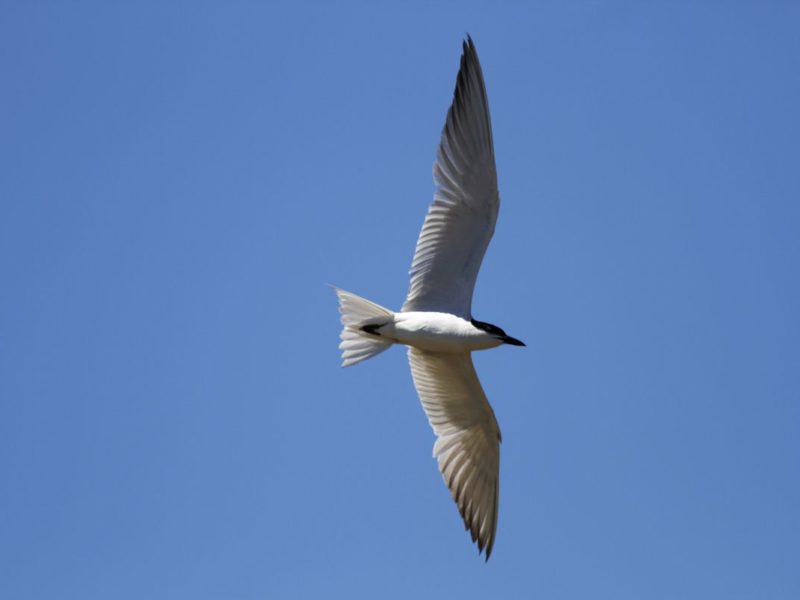 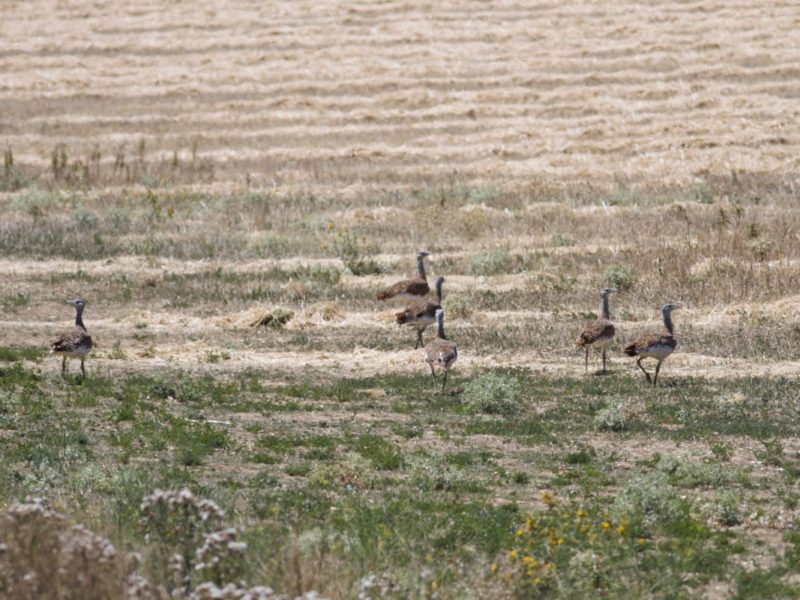 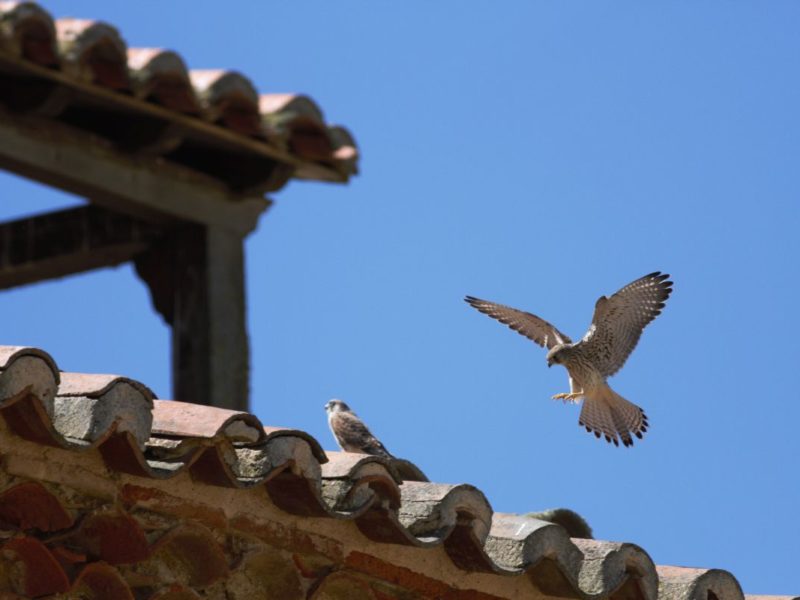 However, it was in the Sierra Culebra, the cradle of Europe’s wolf watching, where observations were prolonged and plentiful. Sightings mostly took place between 08:00 and 09:00 when a resident pack returned to their core area after their night shift. The signal of the pack’s return in the morning was always the chasing of herds of Red Deer that were browsing in the vast land of broom and heather vegetation. Often the pack consisted of the usual crippled alfa male accompanied by several (2-3-4) younger individuals (aka subadults). Watching the behaviour and speed of moving, you could see how successful the wolves hunt had been the previous night. Always using gravel tracks as a highway on arrival, the wolves sneaked into the vegetation to overlook their core area and potential prey.

Despite the wariness of the deer (being potential wolf prey) they had nothing to fear as by 09:00 the wolves significantly changed their behaviour. The combination of increasing brightness and rising temperatures were the trigger for the wolves to change mode: from a focused group of active hunters into a low profile and less active group focusing on finding shade offered by thick bushes or a patch of dense forest in the area. Once hidden in such an area, it looked like the wolves just vanished. Deer sometimes passed through or near such a wolf shelter without causing the wolves to stir whatsoever. Once, two stags literally stepped into such a resting place disturbing a sleeping pack of wolves. The pack in particular popped up but, apart from looking a bit confused, they withdrew and went back to dozing the day away! The two stags, unperturbed, also went back to grazing and browsing. Just remarkable and smashing to see how wolves are present, although off the radar, during daytime in their territory! Especially with plentiful of ungulates around!

New too was an encounter of two different wolf packs simultaneously roaming in the area. Picking up four young wolves (pack 1) strolling in the heather east of the viewpoint, two of them suddenly stood still looking in a westerly direction. Instead of what we expected would be the appearance of local villagers taking a morning stroll through the area, it was, in fact, fantastic to see the crippled alfa male with four youngsters (pack 2) heading, at rather high speed, straight towards the intruders of pack 1. The intruding youngsters, with their tails between their legs, clearly frightened by pack 2’s chasing behaviour, straight away left the scene heading for cover in the nearest patch of broom they could find.

On one evening we picked up three individuals laying totally relaxed in the open on a ploughed field. After strolling around a bit across the field, the gang of three became more and more active once dusk started to fall. In the fading light the wolves disappeared into the heather ready to start their night hunts!

We also witnessed how shy and invisible these animals can be. No doubt the locals in the area, practising their hunting skills, is the reason why members of a different pack that we are familiar with do not show as usual. The only sightings we make here takes place at 08:00 from a different vantage point when a lone wolf takes the shortest route moving as silent and quick as possible from one forest patch to another with flattened ears and tail between its legs. For sure seen by no one except us – haha!

Despite having witnessed so much wolf behaviour here since 2007, photographic evidence or taking videos of the wolves is always a challenge here. First the wolves are always spotted rather distantly, so you must react quickly as the wolves are, most of the time, on the move when discovered. Swapping between two tripods geared with optics – one with binoculars attached to it, the other one with a scope on it – we luckily managed to achieve our goals of sight observations as well as digital photos and video. Equal with the bears, the footage above is a short compilation based on observations done in July 2020.

Well, most of our knowledge and field experiences we have shared with you already before in three previous written news items. Equal with the bears and the wolves, the footage below is a short compilation based on observations done in July 2020. Within the compilation is the appearance of a female with kittens near one of the drinking pools in front of a photography hide.