Offering tailor made trips, EB5 tries to satisfy peoples different approaches to itineraries based on personal preferences, budgets, time tables, target species and photography standards. This NEWS item is all about spotting Polish wildlife the genuine way. It shows that our field knowledge and professional advice delivers quality trips for those who want to do everything themselves. More over, this NEWS item is rather exceptional as all the photographs are taken without the use of photography hides which are available to use in the area. We must confess these type of encounters are also our favourite way of coming across target species when guiding groups in the area.

Besides wolves, Bieszczady is home to a lot of other incredible wildlife. It is one of the remaining places where European Bison roam free with a population of around 668 individuals. Besides these, in Poland there are approximately 1380 more animals of which 9 are in Augustów Forest, 770 in Białowieża Forest, 112 in Borecka Forest, 184 in Knyszyńska Forest and and a West Pomeranian population of 305. 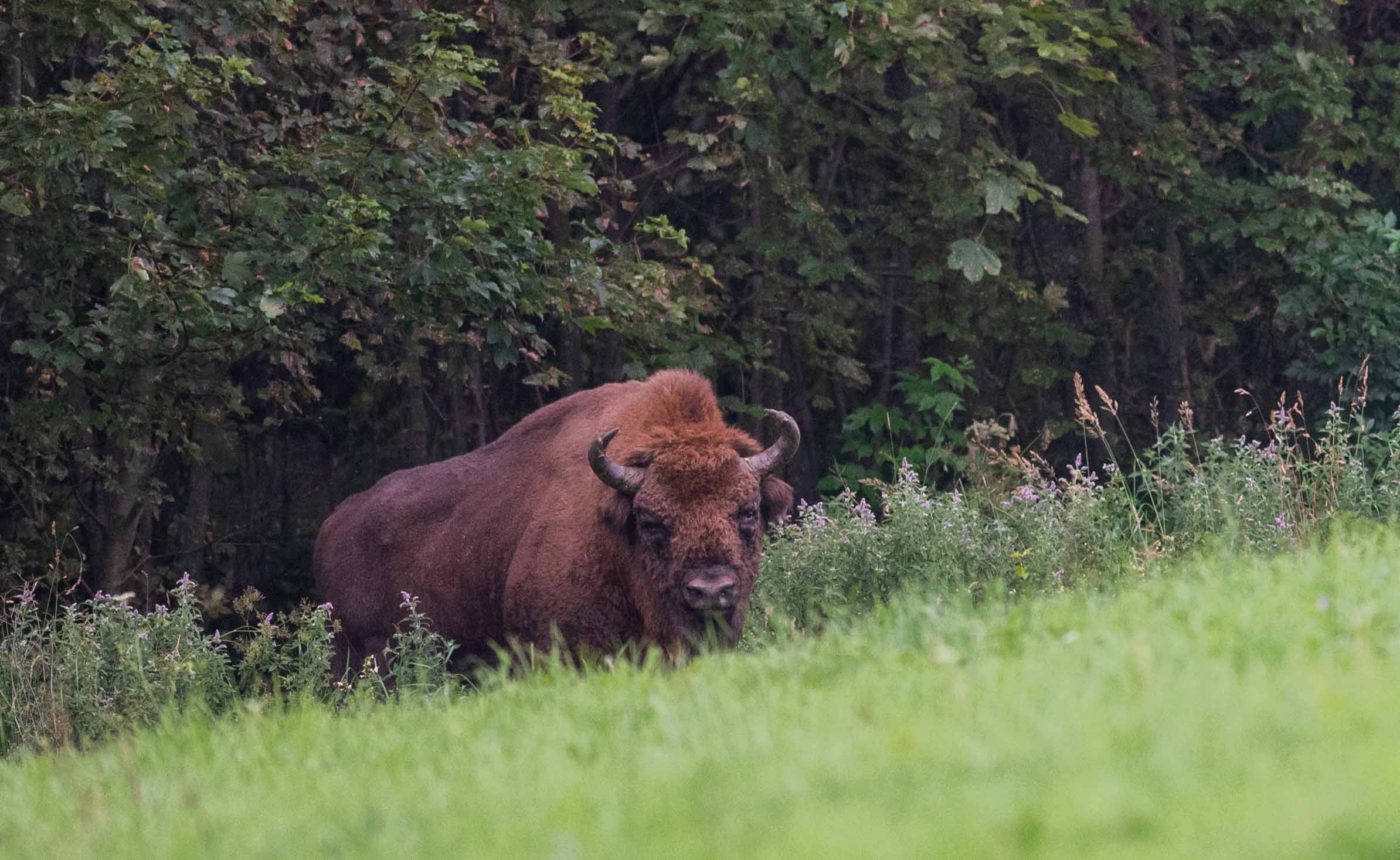 European Bison are Europe’s heaviest land mammal with some bulls weighing as much as 900 kg! We came across one such large bull on our hike to a vantage point at 7 p.m. near a meadow close to the path. It is a truly intense experience when you come eyeball to eyeball, for several minutes, with a massive bison just 30 meters away! 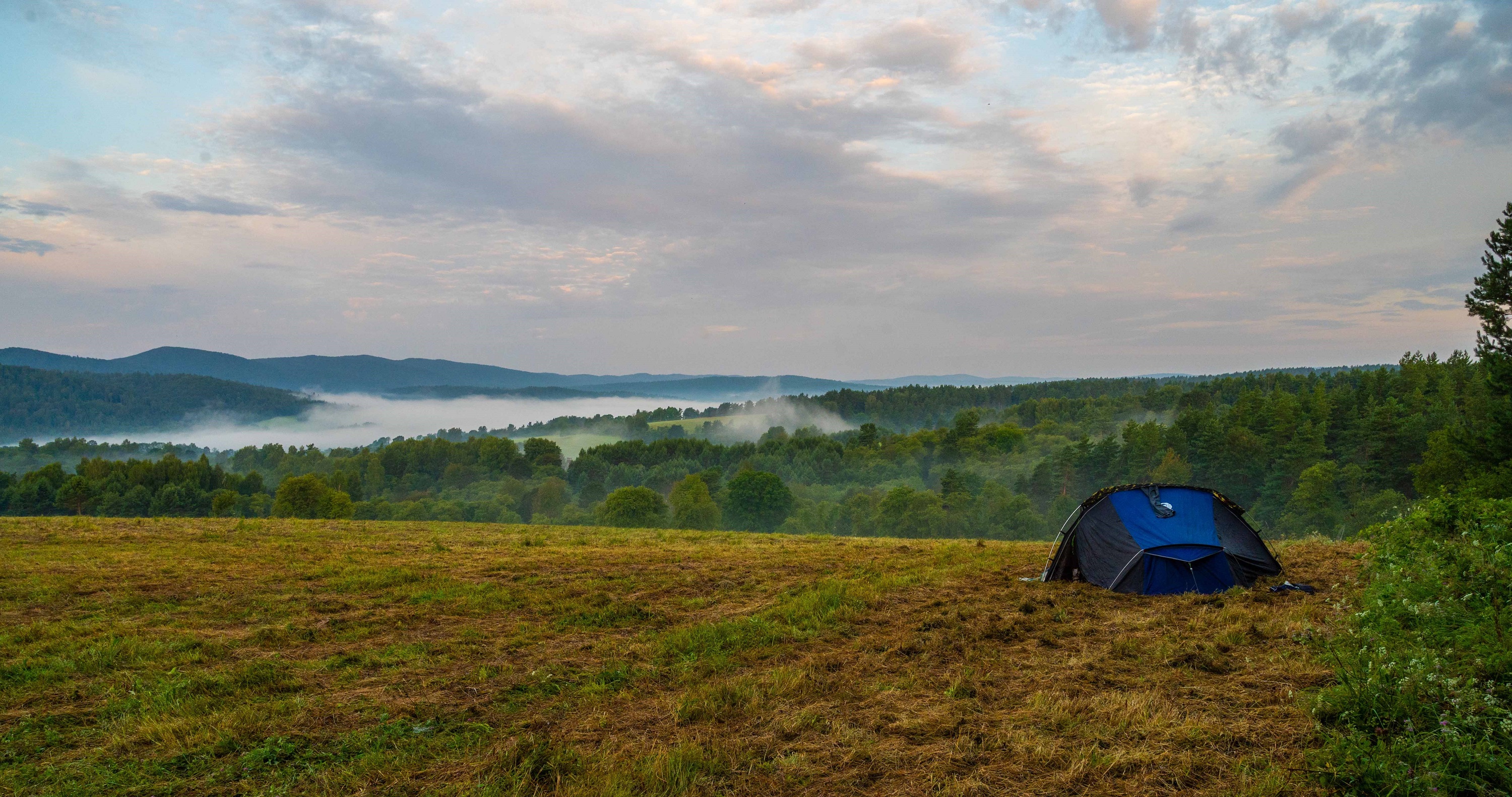 During our stay we mostly chose strategic stake outs to overnight in our small igloo tent. At one such location there is a vantage point where you can overview a large meadow near the San river. 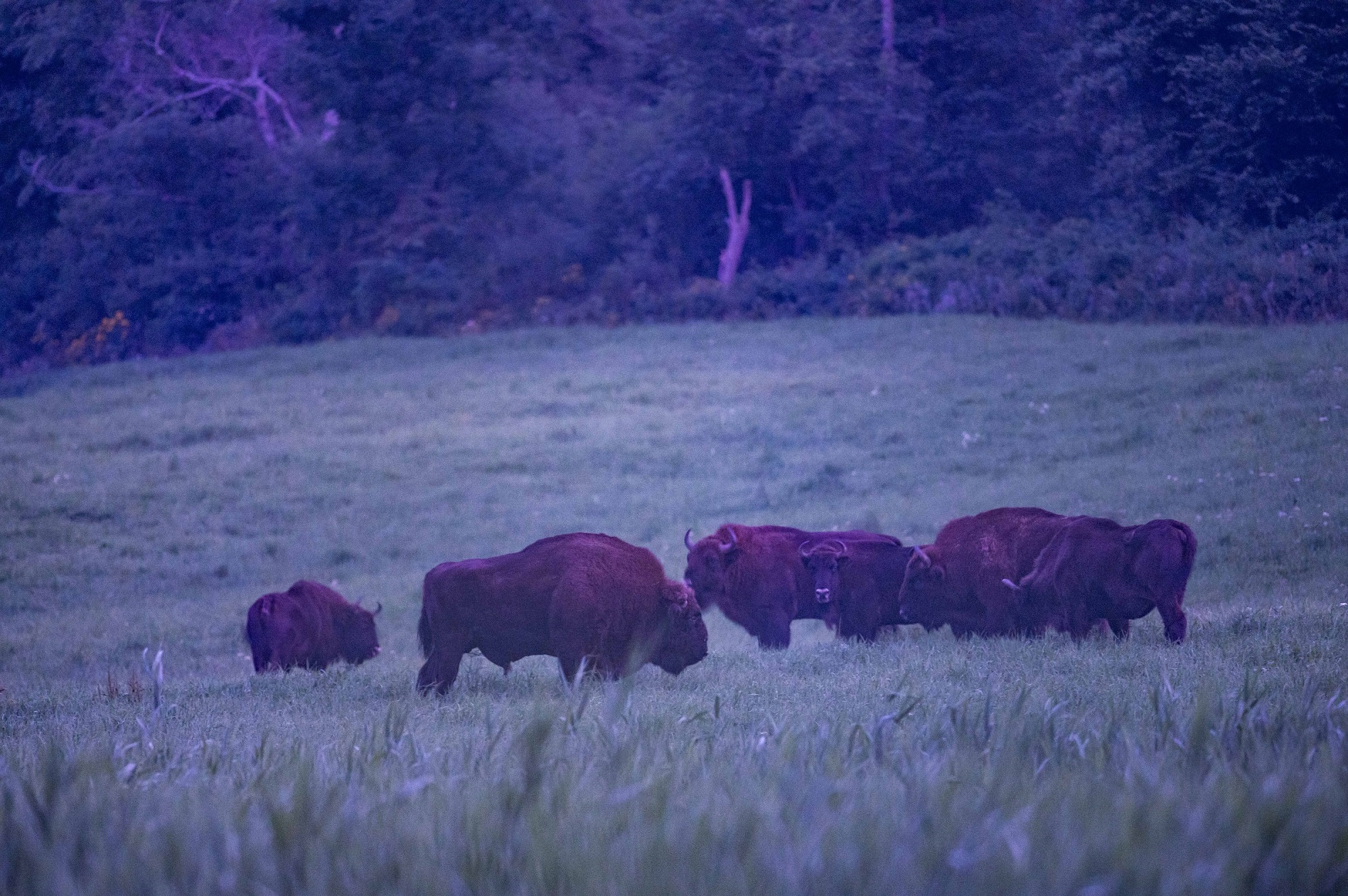 One late afternoon a bison appeared in the distance in one of the meadows. Given the fact that it was dusk I straight away grabbed my camera and camouflage jacket and started to approach the animal. I arrived near the spot where I saw the bison but unfortunately it wasn’t present, the animal must have smelt me and moved off. On my way back it was getting pretty dark when I saw a shape at the edge of the forest – another bison! Getting closer, more and more animals came out of the forest. This time the animals were clearly not aware of my presence. In the end I counted 12 individuals. Thrilling to hear them moving through the grass! All of a sudden one of the herd noticed me but instead of dashing away, the herd stood their ground. Time for me to head back hopefully without being chased! The animals were not impressed as all watched me without moving one step – what a relief! A great way to end the day and go to sleep happy!

The following morning I scanned the same open fields but as is often the case nothing was on show. Feeling tired, from all the long days in the field, the thought of getting back into the tent started to whisper in my mind louder and louder. Getting into wildlife over here really can be fatiguing. But my persistence payed off again as I took up my binoculars to check a movement down in the fields. It turns out to be a wolf! My first wolf sighting ever after several fruitless attempts to see them in Spain, Estonia, Finland and Romania. But now the moment is here. I went as fast as I could but again, by the time I got there, I couldn’t see the wolf. In contrast with the bison yesterday, this time I was not lucky enough to see it on my way back. Nevertheless, although a brief and distant sighting I am thrilled with my first wolf sighting ever. Thinking the momentum of the morning is over, all of a sudden seven wolves came out of the forest running at high speed straight towards me! I can’t believe what is happening, I hid behind some bushes to get out of view. 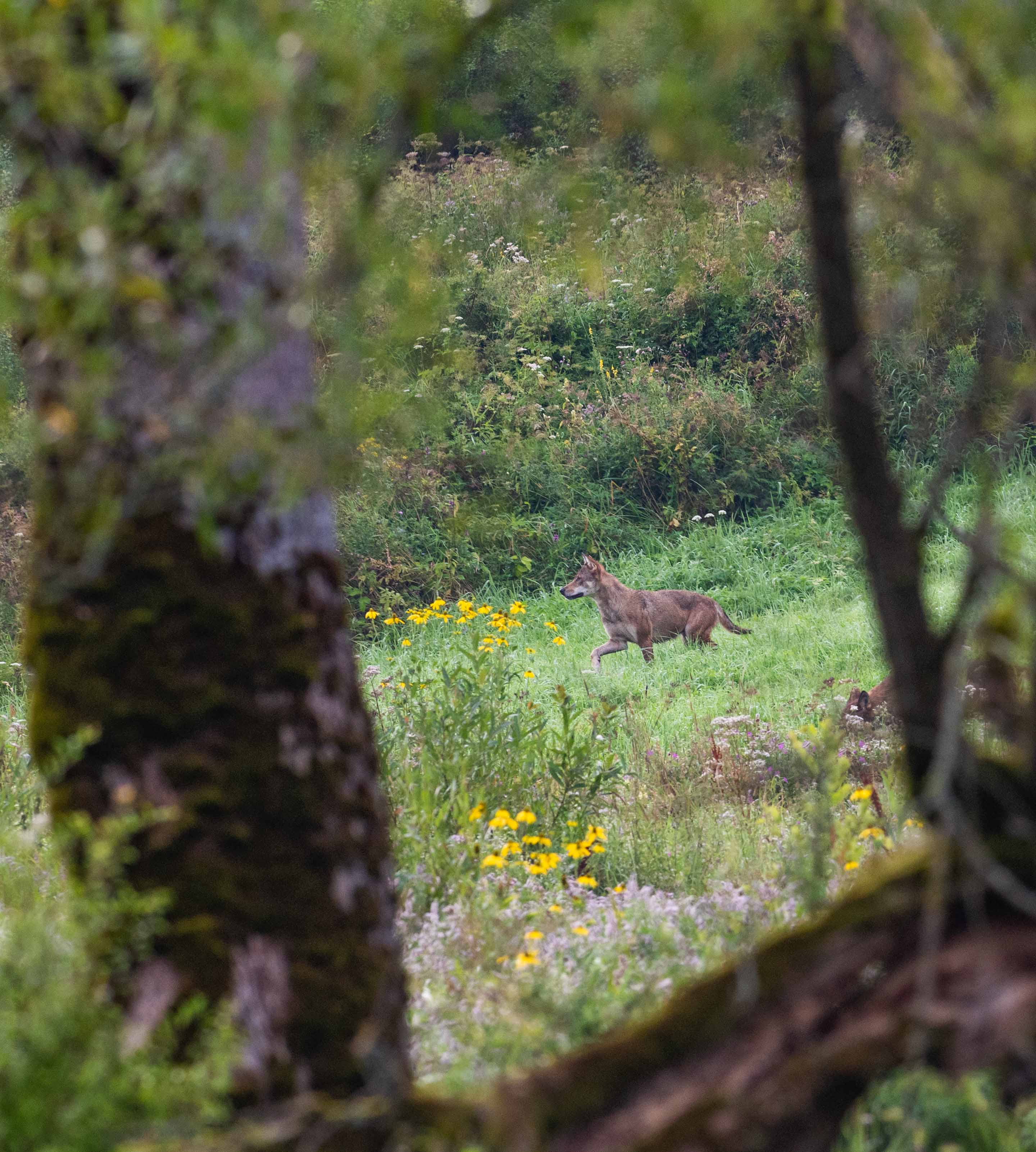 The pack of wolves, stopping for a brief moment about 20 metres distant, obviously hadn’t detected me as they start to chase each other in a playful way. At one point a wolf is only 5 metres distant, I can even hear it smelling the air. It’s only after 5 minutes the pack started getting suspicious, they must have smelled human odour as in no time they retreated and vanished into the forest.

Our alarm starts ringing at 5 a.m. We got up and got in the car. It’s the start of a classic dawn session during our 2 week stay in the Polish Carpathians. By driving slowly we are able to view the mosaic of meadows bordered by dense forests. As advised by Jan having stamina and persistence is important to score sighting of wildlife, we continued for two hours. But despite our efforts, we scored a blank large carnivore wise – only seeing one Roe Deer. As a result, besides being tired, our mood is low. Therefore we start chatting about quitting the morning session for today and go to breakfast. But then we thought, okay, let’s do one more drive around. The best decision ever! Detecting movement in a field, all of a sudden we are awake and focused! The detected animal turns out to be a wolf! First trotting through a field followed by scratching its back in the grass. After a few minutes, the animal comes closer and closer until it crosses the road, where it stops for a brief moment. A few seconds later the moment is over as it disappears into the opposite forest bordering the road we are driving on.

One foggy morning we picked up a couple of shapes on an old railway. Driving a bit back to have a better view, it turns out the shapes are two wolves, in a wonderful setting of the old railway. But they were disappearing in the fog and the forest. Still feeling rather shocked at such an unexpected encounter we quickly drove to a different place where the road meets the railway in the hope of seeing them once more. After a few minutes we saw something coming round the corner – it’s the same two wolves! Just marvelous! 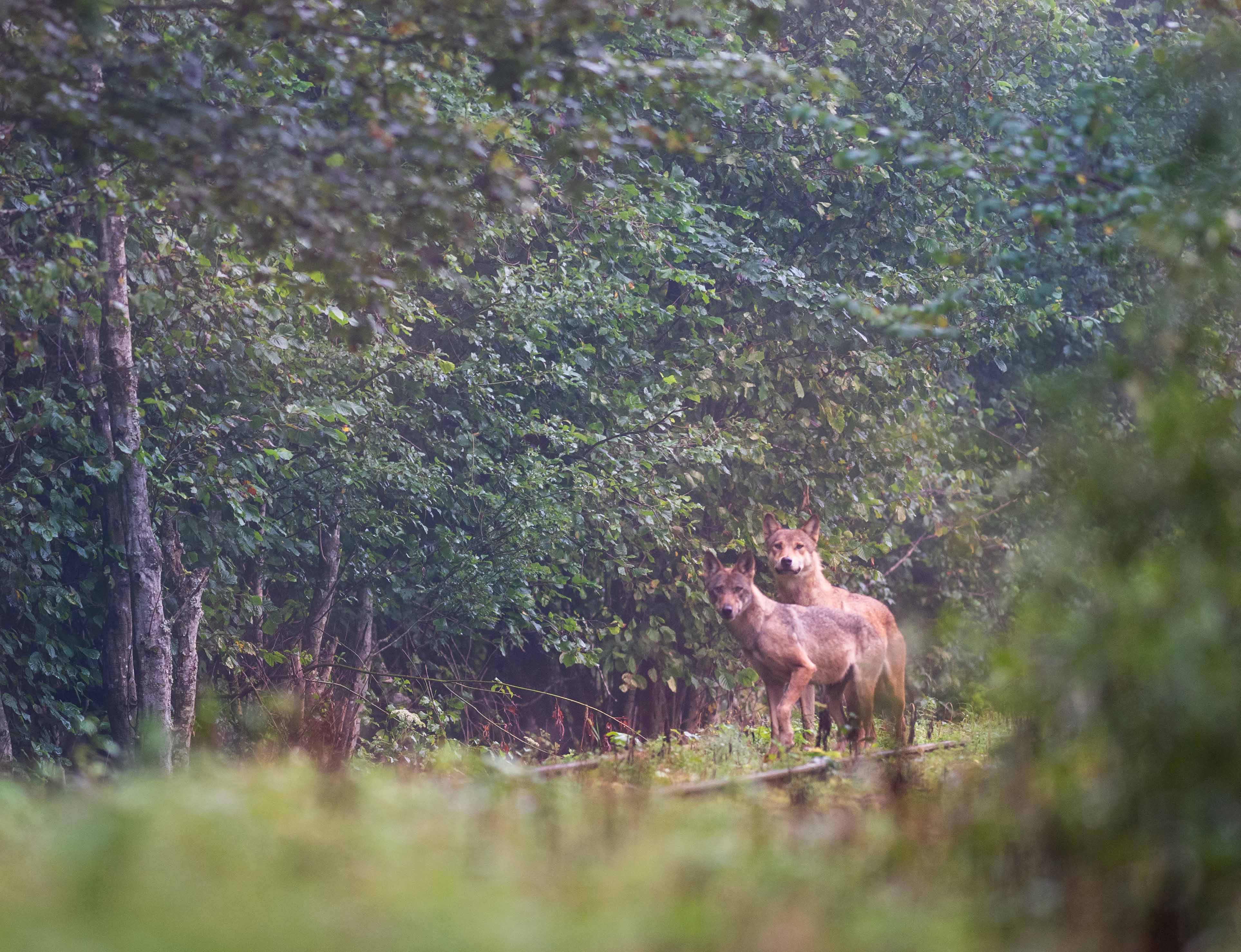 During our 2 week trip to the Polish Bieszczady National Park we were lucky enough to see wolves four times! Never thought I’d be satisfied and rewarded with several ‘once in a life time’ experiences! Especially after several fruitless attempts at seeing wolves in other countries in Europe. For sure I had the most remarkable experiences so far as a wildlife photographer.

All text and images: on courtesy of N. Aelbrecht, Belgium 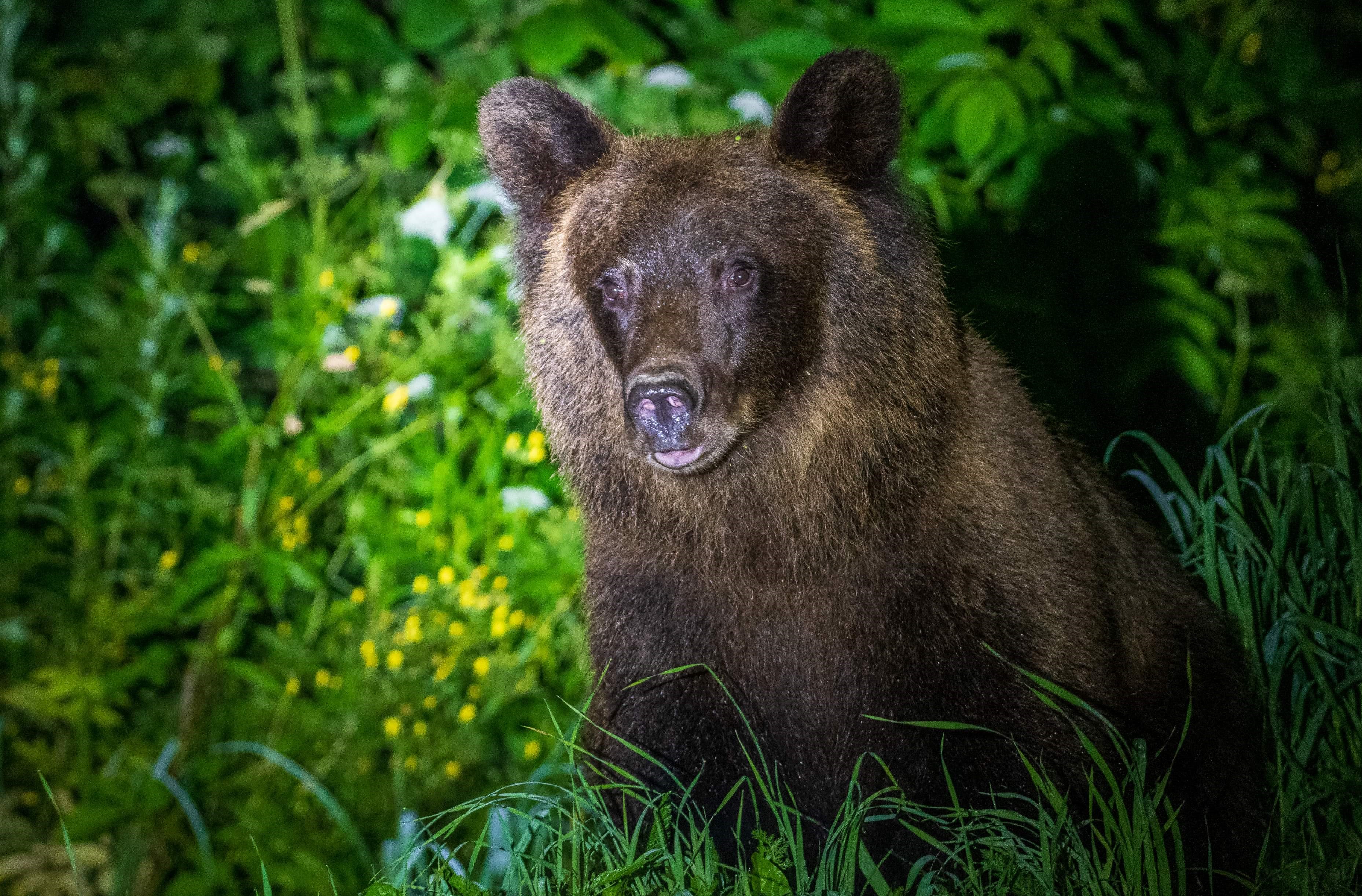 Bear 1: When busy spotlighting on the main road, we suddenly see a dark shape crossing the road in front of the car. A bear, presumably an immature, seems curious as he stops for a split second before disappearing into a thick cover of bushes. As the bear is heading in a parallel direction of us, we drive up the road a bit until we reach a more open area to wait for him. And indeed: the rather young bear is curious and approaches us for a minute before he runs off into the woods again. 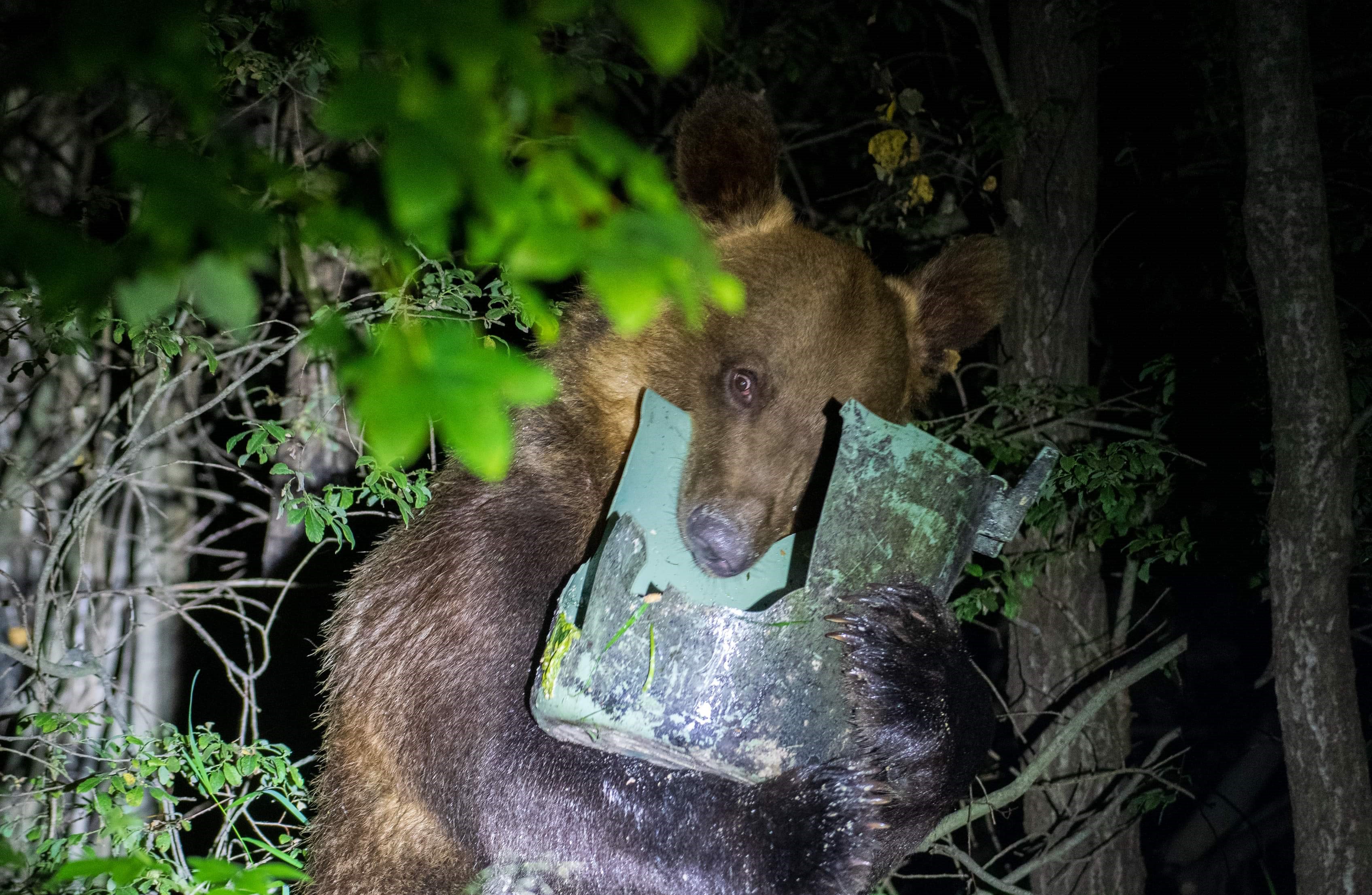 Bear 2: We are spotlighting late at night when we see a bear very close to the road. The bear, busy eating something, doesn’t seem too worried about our presence. Because of the dense undergrowth, it’s actually unclear to us what the bear is eating. When the bear eventually notices us, she/he looks up. By doing that, we are able to get an idea what is actually going on: she (or he) must have found a pile of rubbish since there is a bucket in its mouth. Being a bit confused about our curiosity and torch, the bear takes the bucket and walks off. Confident that the animal will return to this food source, we turn the car off and wait. After ten minutes we can hear the animal coming back.  Totally relaxed this time, the bear continues to eat its dinner close to the road. Once finished eating leftovers, the rather mature looking bear moves on into a field before vanishing in the forest.

All text and images on courtesy of M. Kaptein & J. Groeneveld, The Netherlands