Challenging and different but always rewarding

A spring visit to Spain is always something to look forward to after the many autumn and winter trips of the popular EB5 combo of Iberian Wolf and Iberian lynx during the past few years. The spring bears of the Cantabrian mountain range were once again on the program at the end of May 2022. The abundance of flowers during this period really adds an extra dimension to observing large carnivores in their natural environment. 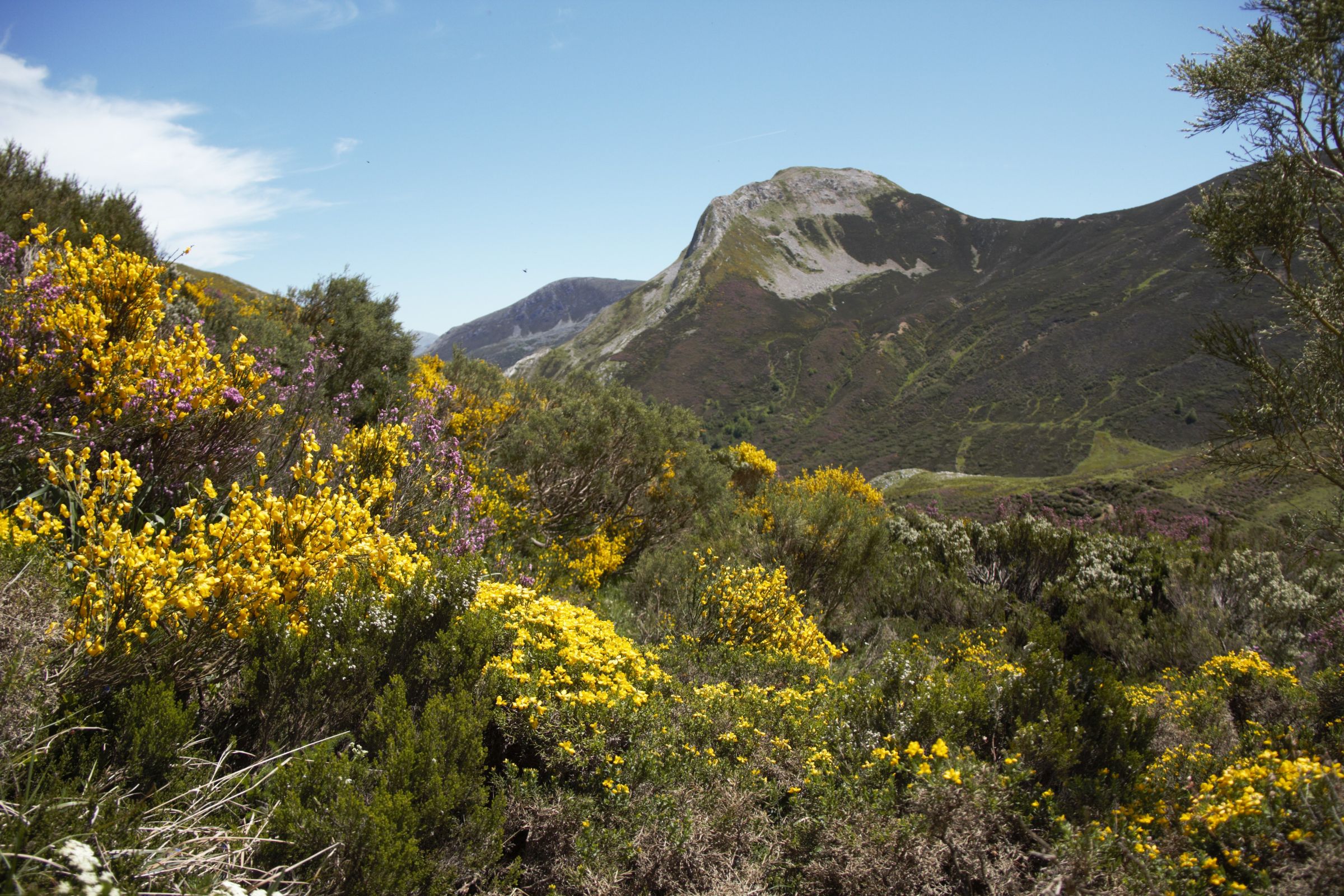 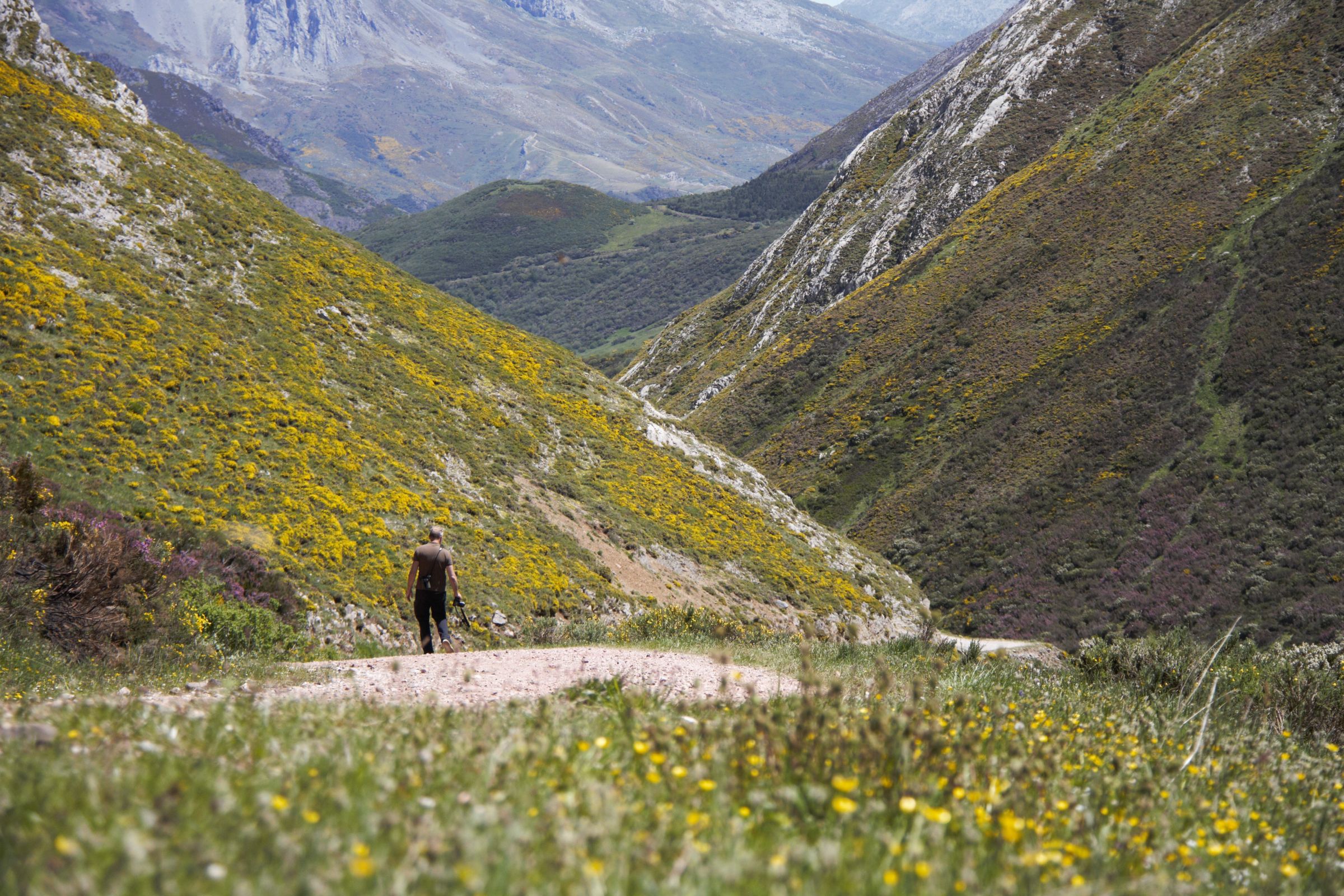 The many orchids and the summits with heather and broom in bloom are simply breathtaking. More built up knowledge of the local terrain also means that, in addition to an A plan, we can also fall back on a B, C and D plan if the bears do not cooperate. Moreover, there’s always the bycatch of other good target species in the area including European Wildcat and Iberian Wolf. At the place where we already scored Wildcat and Iberian Wolf earlier in February (see the previous EB5 news item) we now also see the resident bears. On top of that, in the same place, we saw the Iberian Wolves and Wildcat again. Astonishing to see a lone Iberian Wolf that appears on precisely the same ridge as in February. Also great to see a Wildcat in a meadow within walking distance of the guest house. We also saw a different individual in a valley elsewhere.

A good balance between agriculture and nature

The mountaineous small-scale agriculture is characterized by a mosaic of meadows intersected by hedges, trees, bushes and thickets of broom and heather. It is in this type of landscape that the Wildcats can hide and hunt perfectly. So we are not surprised that we randomly bump into individuals during our search for bears. It happened in the middle of the day, with an individual loitering and resting in the shade of a row of poplars. It became active and crossed a stream to hide in an adjacent thicket. A fallen tree acted as a bridge for it to reach its daytime hide away. There is no doubt that man made biotopes can offer a safe haven for top predators here! 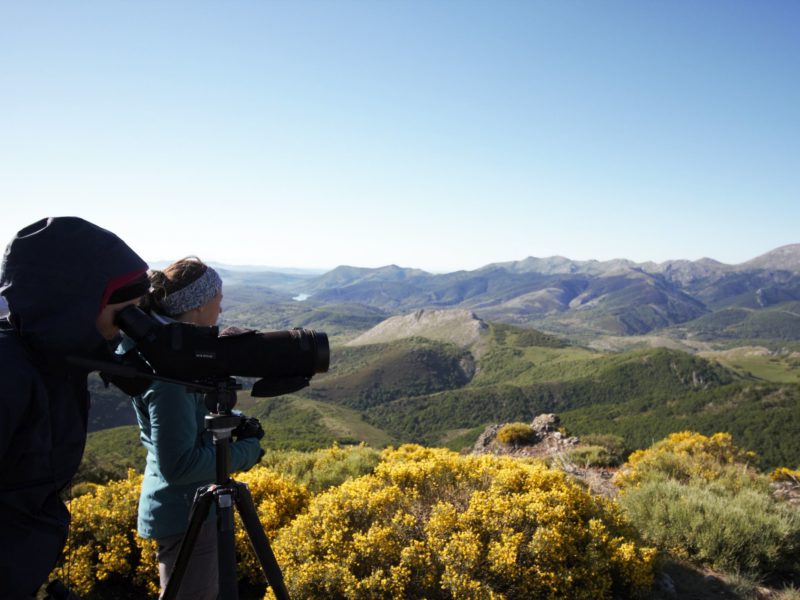 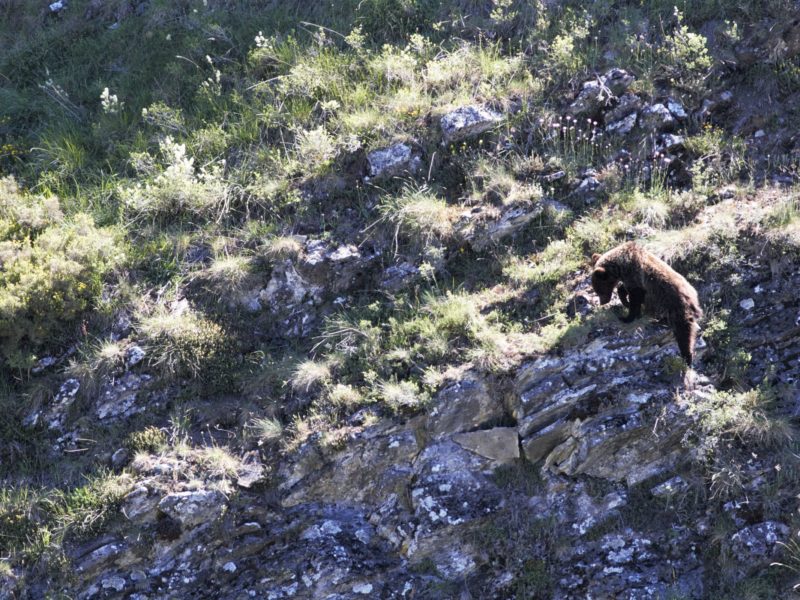 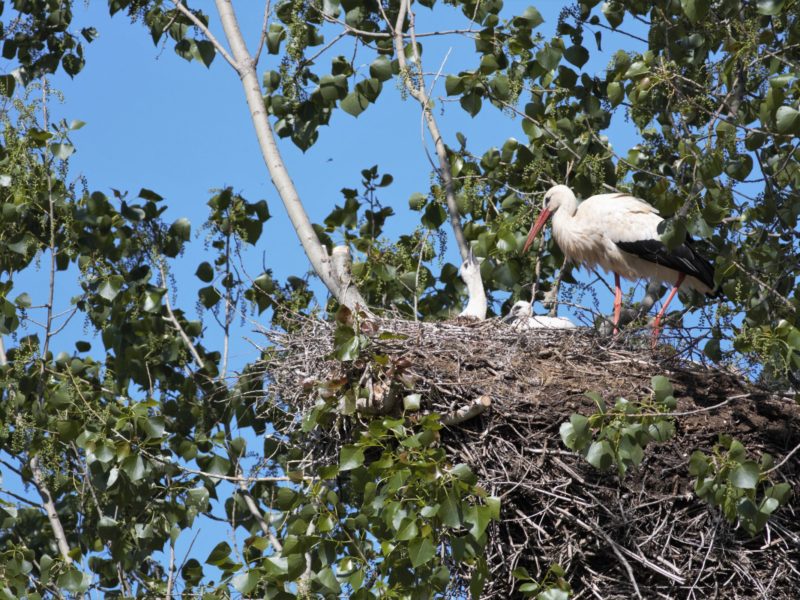 Occupied nests of White Storks: a common sighting all all over Spain © Jan Kelchtermans 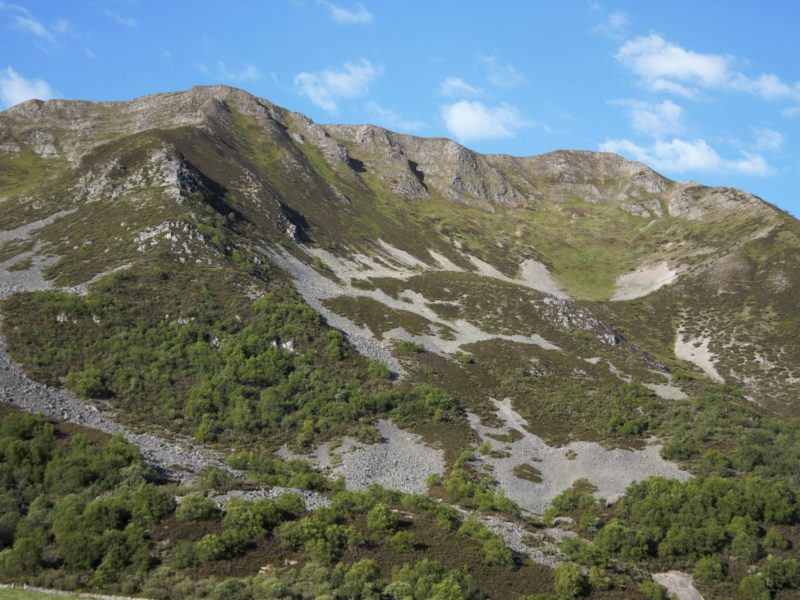 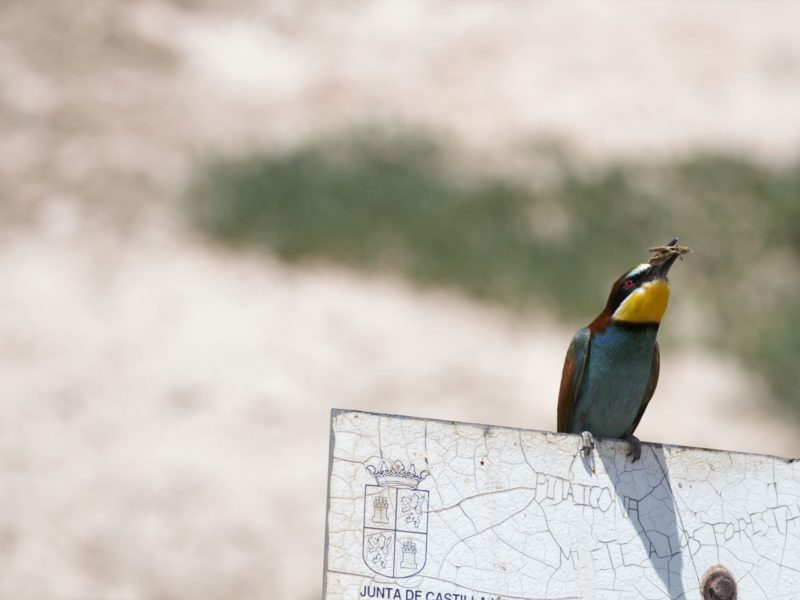 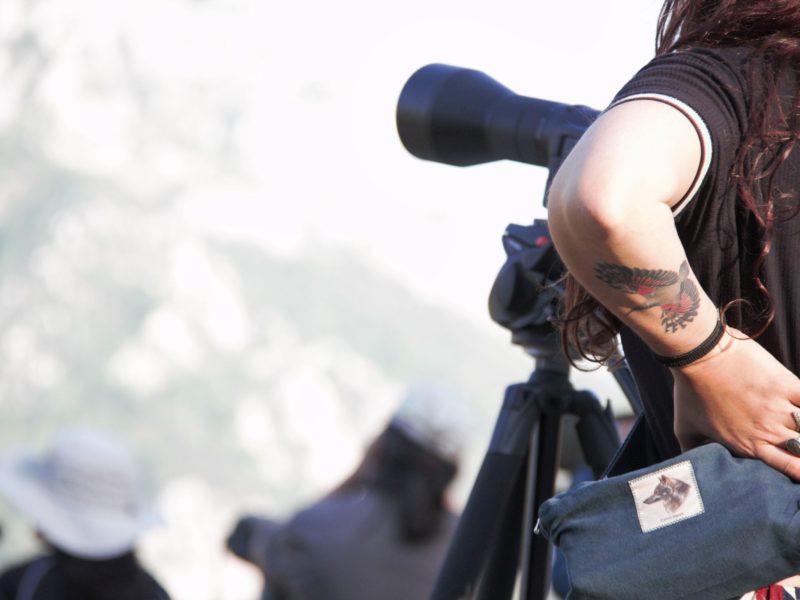 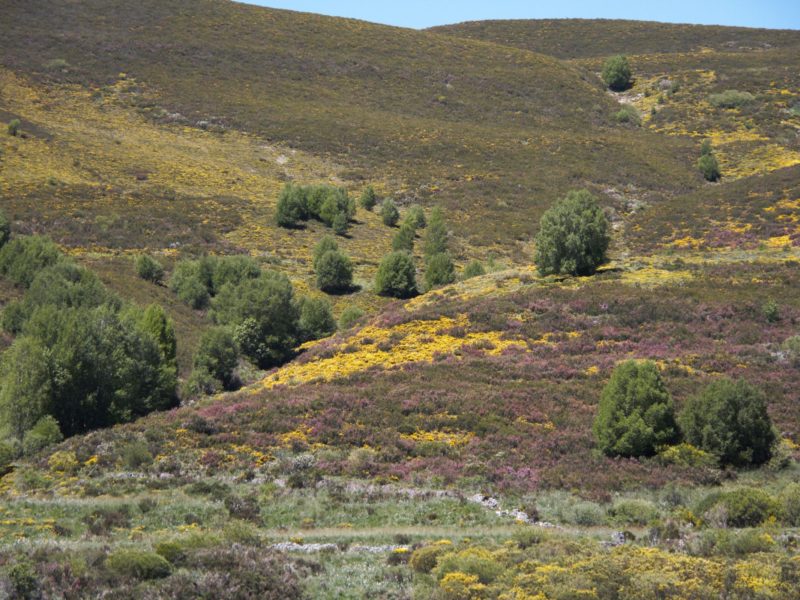 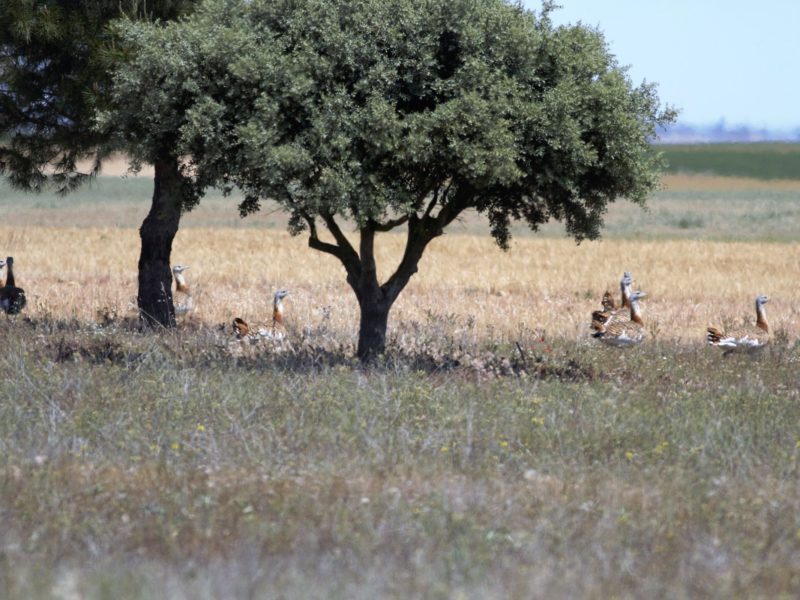 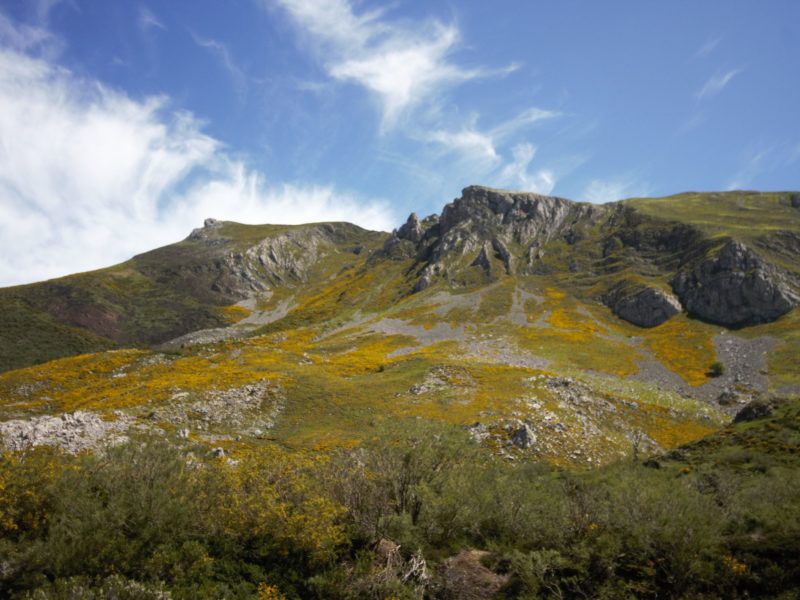 Bear-wise we scored a total of eight different individuals. Initially it took a while before we located the first bear, a female accompanied by a cub, born the previous winter. Back up information from a local is often useful. After all, it is he who sees the female bear appear at dusk from a cave at the very top of a mountain peak. The way in which her tiny cub playfully maneuvers over the rock formations is downright funny to watch. This also applies to another female bear with two cubs elsewhere in the area. Unbelievable is the way this year’s very small cubs manage to follow their mother as they roam the steep mountain slope full of trees, shrubs and rocks. No obstacle turns out to be a problem!

The immature Brown Bears, recently living independent lives, show up in the most surprising areas. It is apparent from a pit stop we made near a place that we check for Egyptian Vultures, Rufous-tailed Rock Thrush, Raven and Alpine Chough. Very close to a rather busy tarmac road leading towards the village of Villablino. At the top of a steep rock wall Jan suddenly saw an immature bear standing next to the electric fence of an adjacent meadow. It is an outright shock when you see a bear appear in your binoculars so suddenly, totally unexpectedly! From relatively close range we saw the animal foraging on herbs, grass and spring flowers. What is called a prolonged and superb observation! 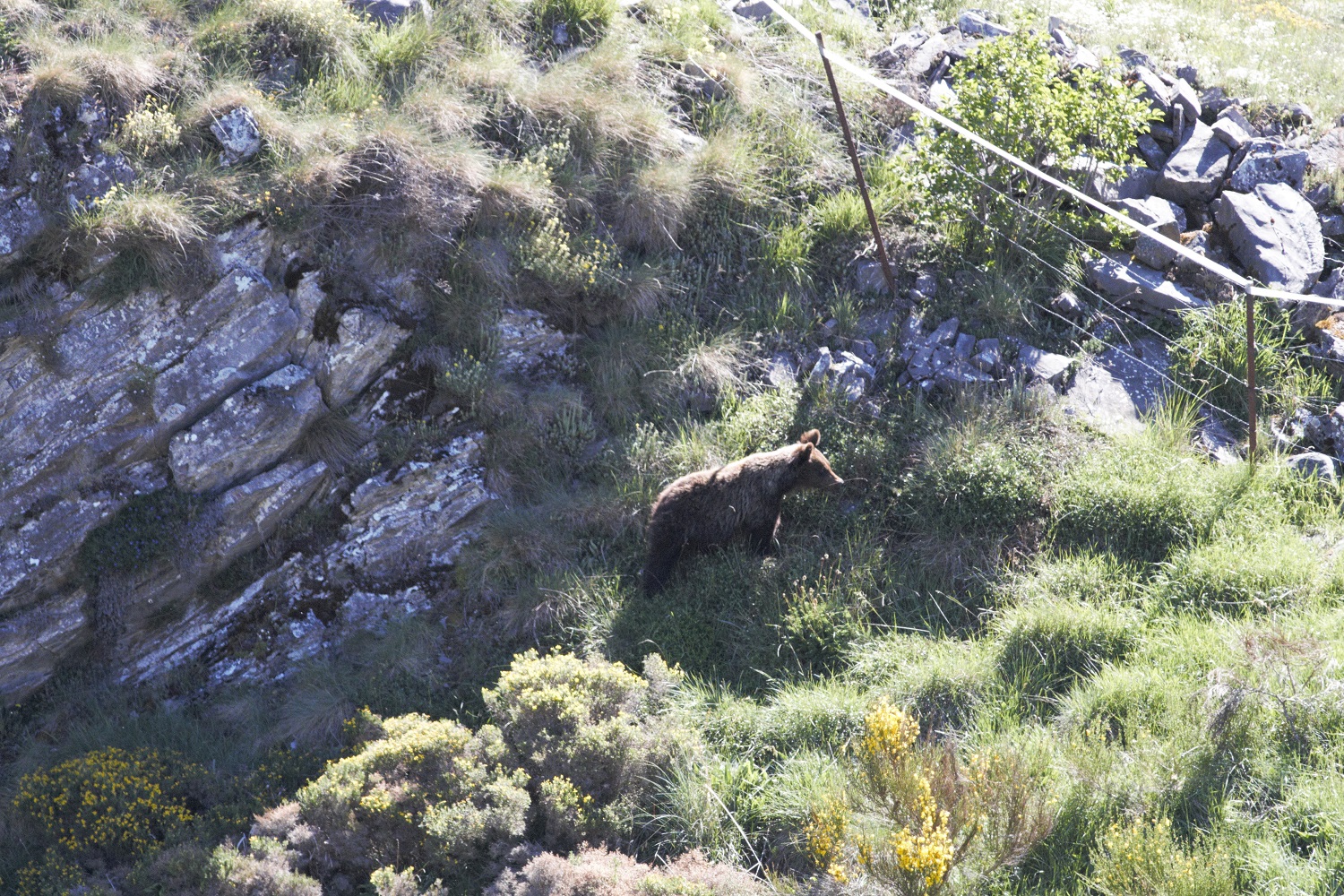 While transfering between different hot spots for local bears, we often stopped for a snack and local draft beers which are served with mouth watering tapaz. Equally pleasant and surprising with a break near a subalpine meadow full of orchids we located a pair of breeding Wallcreepers. Viva Espana!

The current situation of the Cantabrian Brown Bear population

In 2019, the census was 330 in total: 280 individuals in the western nucleus, about 50 in the eastern nucleus. Given the annual increase of 40 females with 1.6 cubs per year and a mortality rate of 25%, the latest counts indicate about 400 individuals. So there is definitely expansion. For example, there were no resident females near the town of Proaza until 2015; now there are three breeding females present. Even in Portugal (Braganca) there was a sighting, the first in 180 years. But, population expansion of the species has clearly reached its limit. Despite the higher current total numbers of Cantabrian Brown Bears compared to 15 years ago in Northern Spain, current dispersal of the species is not without consequences: newly reached areas are less suitable for foraging and places where bears gather to mate in the spring are disturbed by hobbyists: mountain bikers, alpine climbers, parapenters, horse riders and even wildlife photographers.

lack of ecoducts or natural corridors between core areas,

the installation of wind turbines,

less tolerance in general for the species in areas where bear tourism is not important.

Despite all these challenges and obstacles, it is positive to notice in areas that offer the species more protection, females produce more cubs. From an average of 1.9 cubs per spring in recent decades, this is now an average of three cubs. A well known female in Somiedo NP was even seen with four cubs. Spotting this family will definitely be an EB5 goal when there next year! Only a few places left for our bear break the 27th till the 31st of May 2023!