A negative PCR test 48 hours before departure: Covid was the only thing that might have stopped us from being immersed again in the mega fauna and flora of the Neotropics – my eighth visit to this continent. Two years have passed in the meantime but now we were once again to be blown away by nature in all its near pristine glory. After all, everywhere worldwide there is a factor that disrupts everything. You just can’t escape it anymore: global warming. It is no different in Ecuador, the country of our destination. 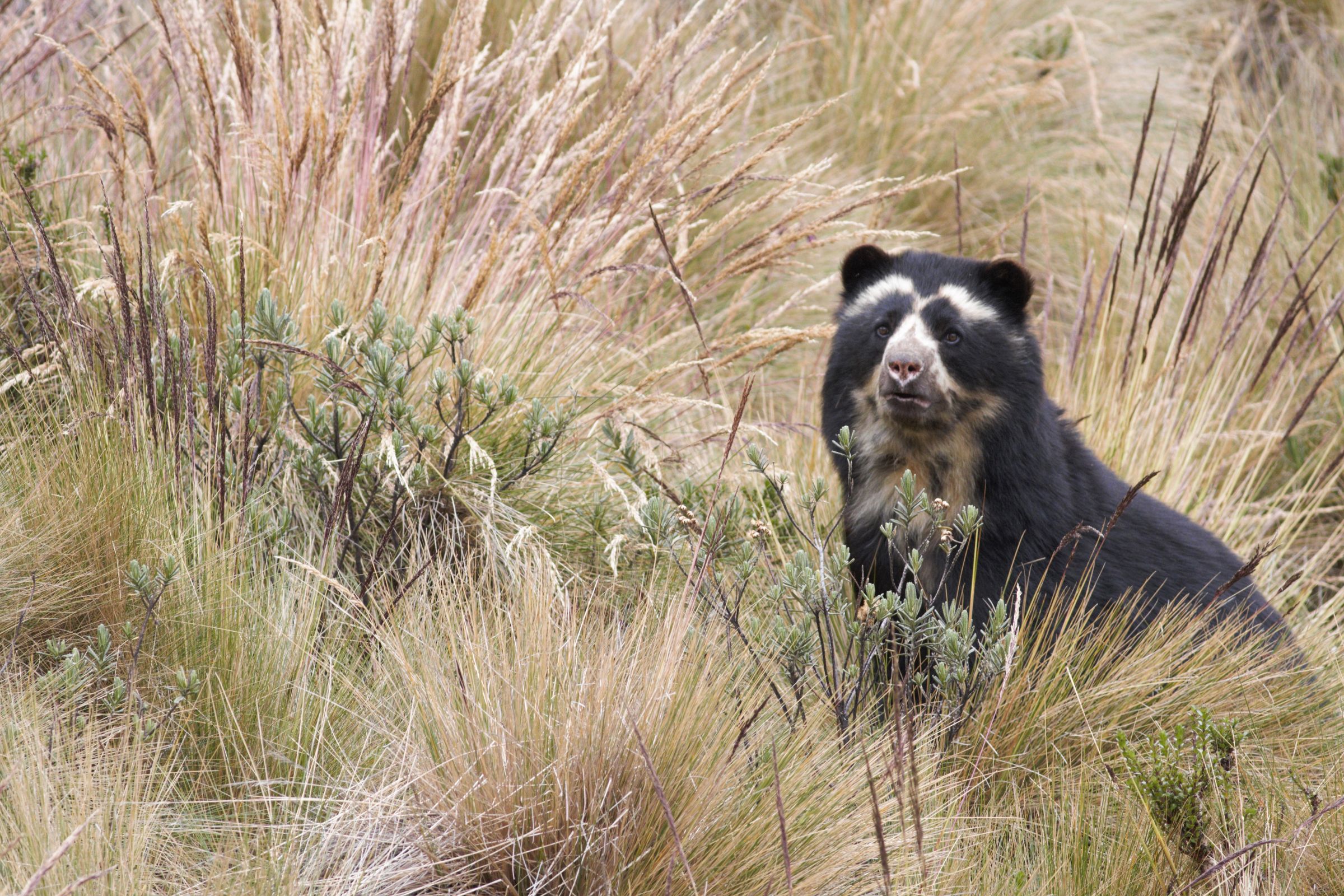 I was eagerly looking forward to some new species. After 30 years into wildlife, you simply push your boundaries: your knowledge increases, your skills increase, your appetite and plans change, your experience – highlights that few people will experience – becomes an addiction.

Covid of course cut it hard. Adrenaline surges of “Snow Leopard in the telescope” level were from August 2019 when we stayed on the Tibetan Plateau. A journey that still makes me euphoric when I think about it!

It was still a bit nail biting. Of course the PCR results came in earlier for one than with the other; even though you sat side by side in a PCR test room. Just like with suitcases that you drop before you fly: when you arrive at the destination conveyor belt they never appear one after the other. It is the only thing that is certain about Covid – the insecurity!

But just before departure, I also received the redeeming  text message: your PCR test is negative! 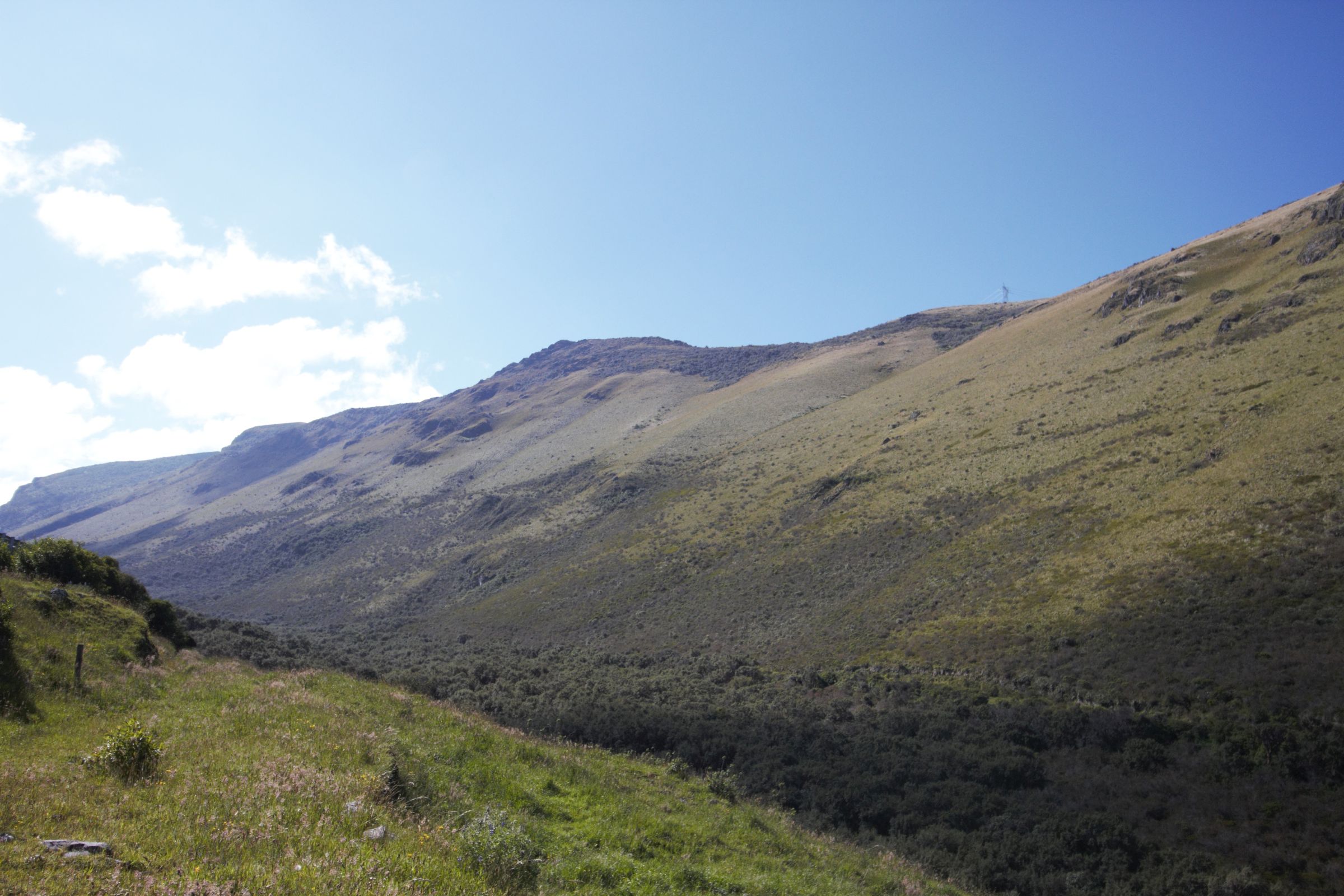 A slope of The Andes where Spectacled Bears thrive © Jan Kelchtermans

Quite funny how, in transit in Madrid Barajas, we celebrated Christmas Eve with some snacks from a vending machine. The flight itself to Quito is one of pure relaxation; many don’t like flying so far and long. No problem at all with watching some movies, listening to music and, towards the end of the night, getting some sleep. Before we know it we are on the tarmac near the equator where we exchange some American dollars. 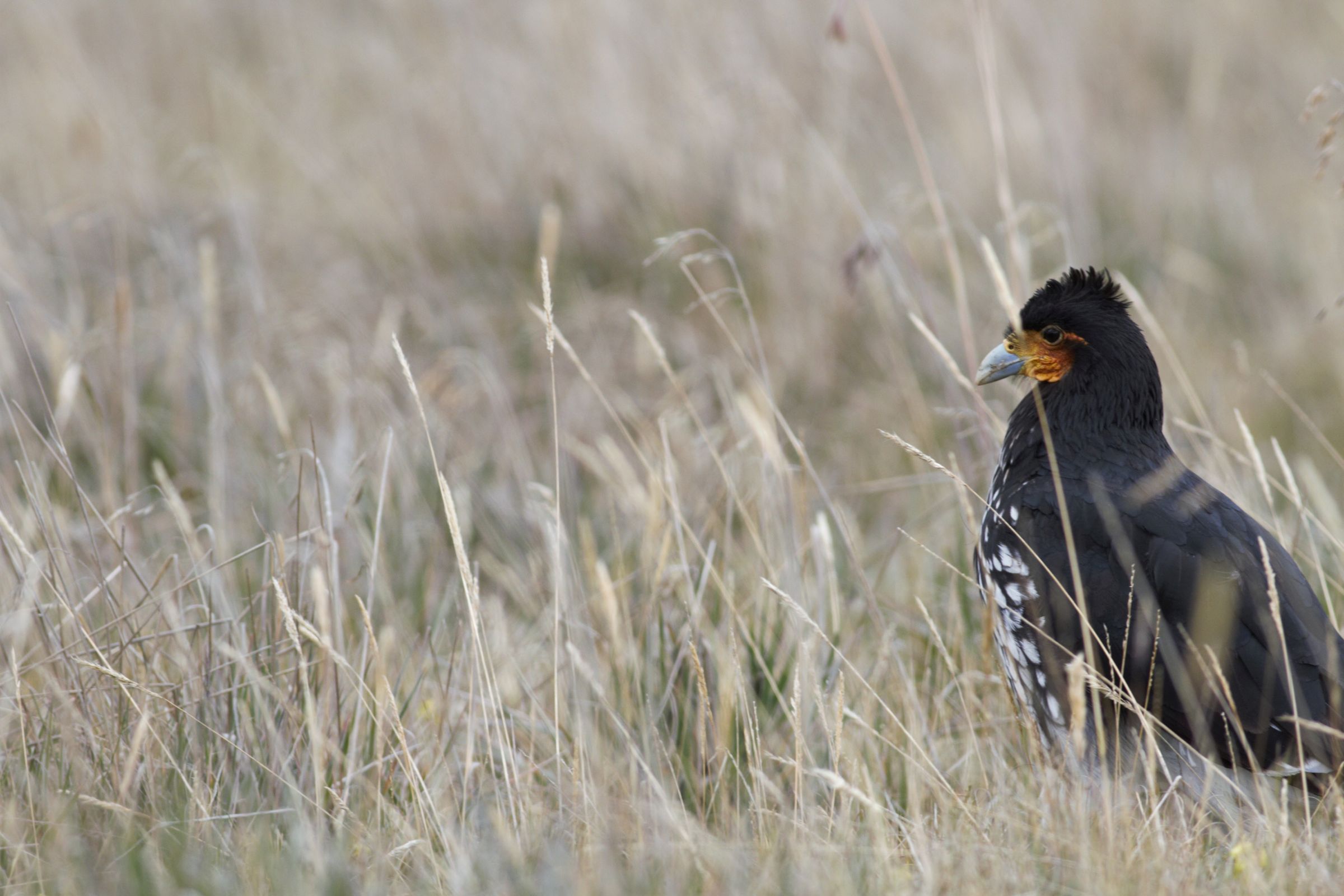 A taxi takes us to our lodgings. Breakfast and immediately into the field. The sun shines!

Winding our way up along the highway we stop at specific places on Andean mountain slopes. Especially where they are lavishly supplied with Bromeliads. At one of these places, our driver buys a yogurt drink for breakfast and asks the saleswoman at the booth if she’s seen any bears recently. “Yesterday yes, but not today.” Unbelievable, isn’t it. What is described as a rare bear species is spotted here by stall sellers along the highway! The tension and expectations are rising.

Viewing the gaps in the fragments of planted pine forest with views of the mountain side, however, does not produce any bears. We stop a little further and get out where the good weather conditions offer a wide view over a flank teeming with bromeliads and immediately it hits: a black moving object in the dense vegetation turns out to be the enormous black head of a Spectacled Bear! The animal, sitting back, forages on the bromeliad plants present. Our pit stop along the highway apparently works as a magnet for the local population to see what is going on. In no time there are a few cars and the moment is immortalised for them with photos taken through our optical equipment with their own mobile phones. The same everywhere – haha! 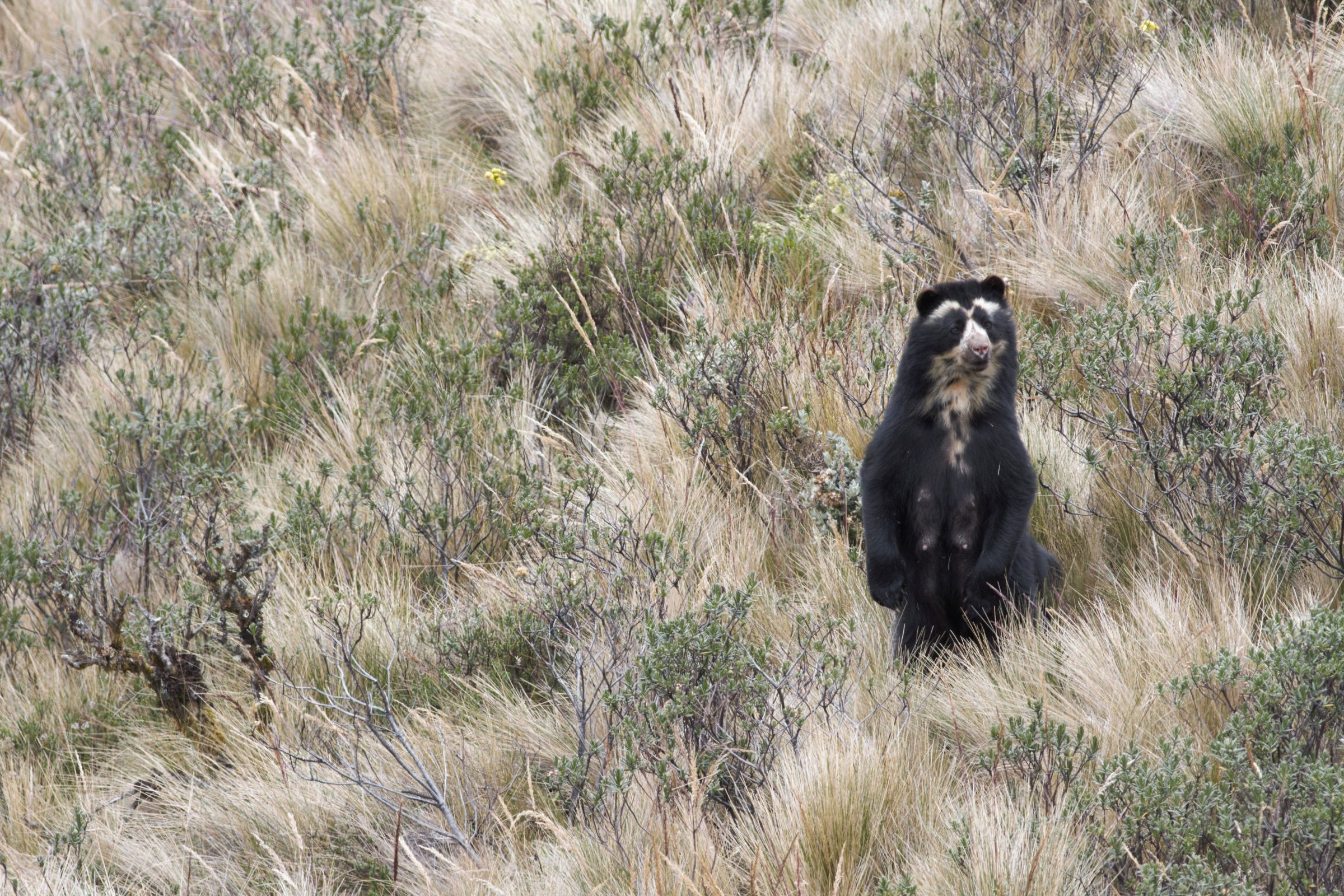 Despite being a bit flabbergasted by the early scoring of our target species, we fully enjoy the sighting. Fairly impressive when the bear, standing on its hind legs, with hanging front legs, repeatedly stares in our direction! As time goes by and the sun gains strength, the animal moves towards somewhat denser vegetation. He eventually disappears from view. And we’re spoiled for choice: during the observation, the airspace protects two other top species of the high Andes: Andean Condor and Carunculated Caracara ; both mobbed by Black-chested Buzzard-Eagles & Variable Hawk. From the valley comes the loud cry of Tawny Antpitta. What a start to the journey. 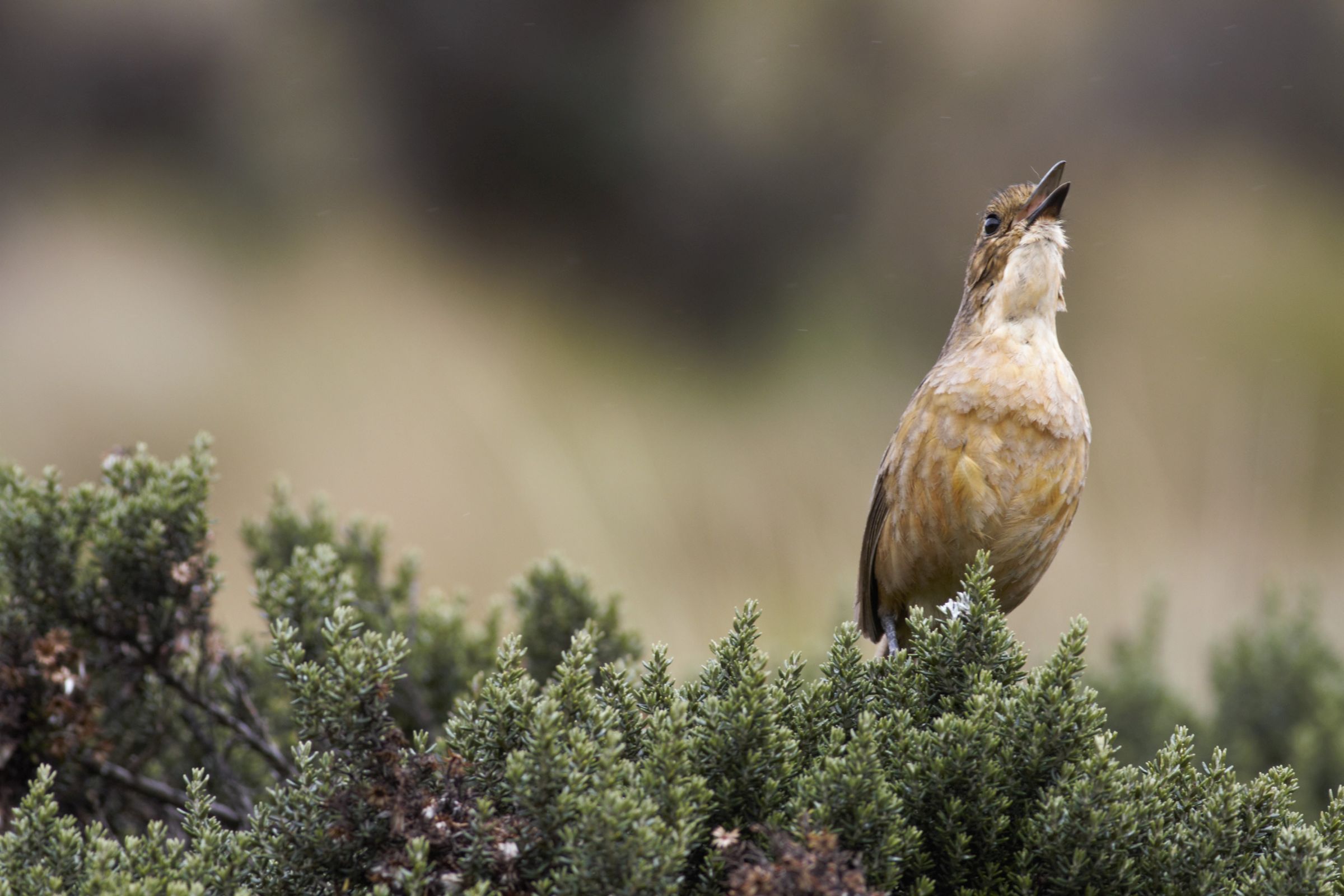 Via an old road parallel to the highway we go higher in the Andes. Once, at almost the highest point, we take a road to a cluster of mobile phone masts. The second bend past the ranger station something catches my eye – a black, moving wave, which meanders through the paramo grass. Pretty soon there is that typical head with small ears. Spectacled Bear again! And not one but two. A mother with young. We urge the driver to continue driving so that we can stay ahead of the bear and watch from a distance. It works a treat, we park the car, and have a dream view of a wildlife scene like you only see on nature documentaries: the female bear, fully engaged in dismantling a bromeliad, sits in front of us in the paramo grass bordering an altitudinal swamp with the snowy Cayembe Coca volcano in the background. Moreover, she is surrounded by an always playful and cheerful youngster of several months old. Idyllic natural beauty! Emotion! 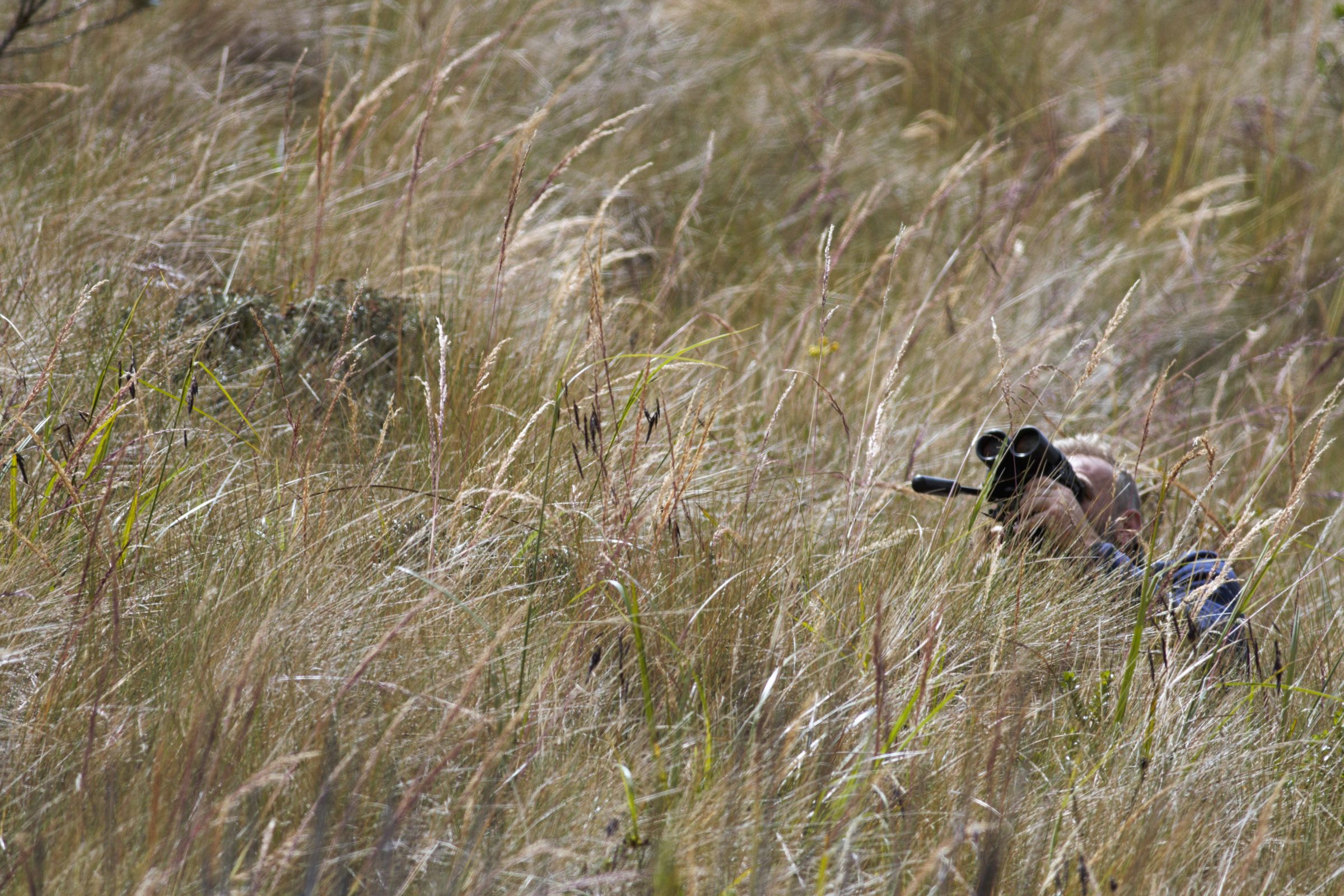 A too close approach and stupid shouting (to get the bear his attention) from our driver with his bridge camera makes the bear a bit restless. She stands on her hind legs several times to estimate the intruder with camera, but in the end she finds the bear paparazi less interesting than her meal. Instead of running, she just continues to forage.

After consuming the bromeliad, the female bear, with the young in her wake, continues her journey through the paramo grass until she disappears from view. Once again blown away by the sighting, we also continue our journey. While munching on some refreshments at the very top by the cell phone masts, we almost literally step on a pair of Rufous-bellied Seedsnipes. They are also very approachable. 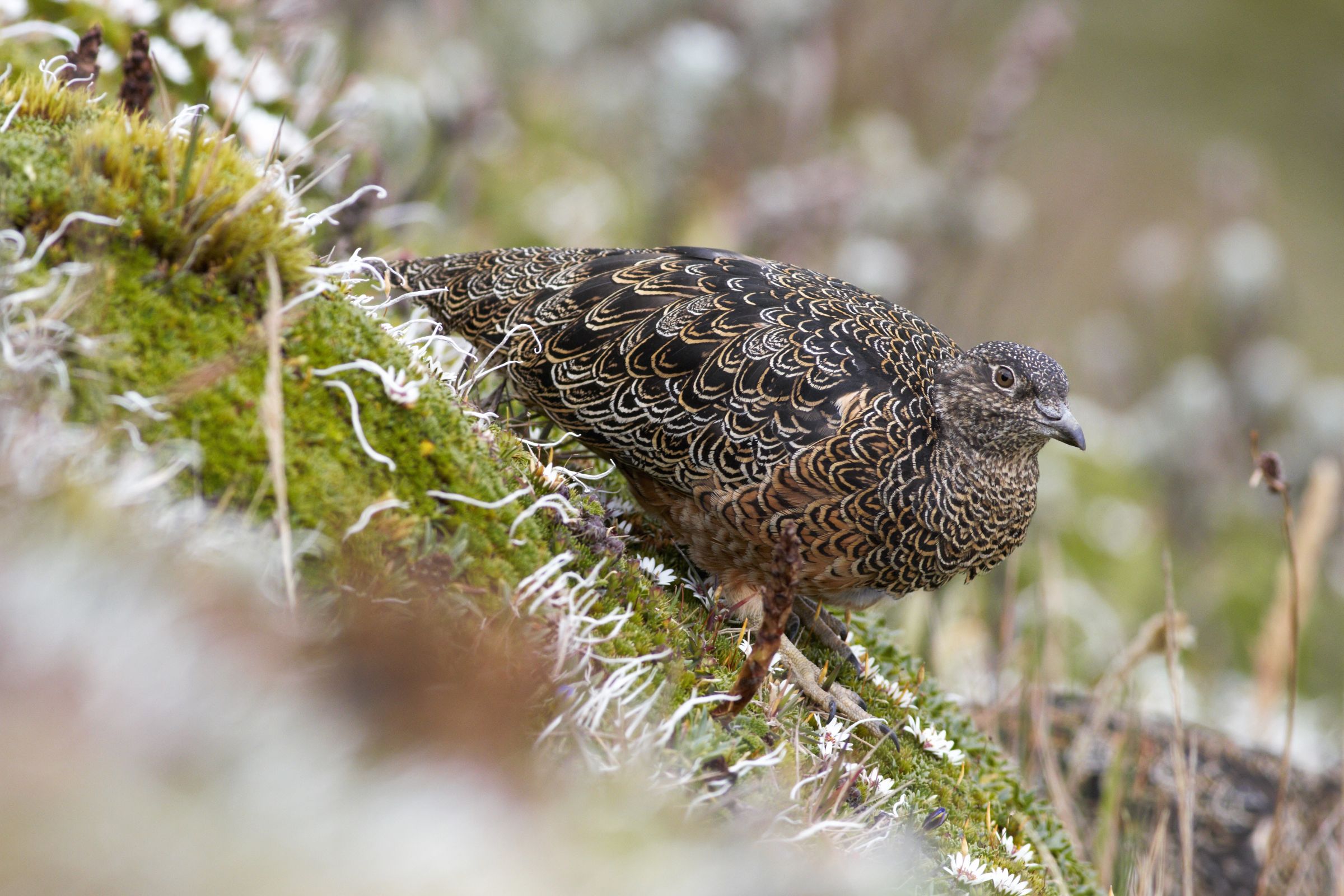 And the bear spectacle isn’t over yet. On the way back, the bear appears to have returned to the place where she feasted on the bromeliads. She then crosses the track followed a little later by her cub. Moreover, we manage to find them again, they both cross the gravel road again and we see her tear into a bromeliad for the second time. Now she allows us to approach even closer. We literally hear her eating her meal! In the end we see her at the top of the ridge where she almost collides with a White-tailed Deer that we already saw and photographed earlier. On day one of the trip and we have exceeded all expectations. After all, we are presented with the total picture: memorable eye-to-eye moments, good weather conditions, long-term and frequent observations of a Spectacled Bear mother with young in a dream environment. Fully satisfied we return to our lodging. 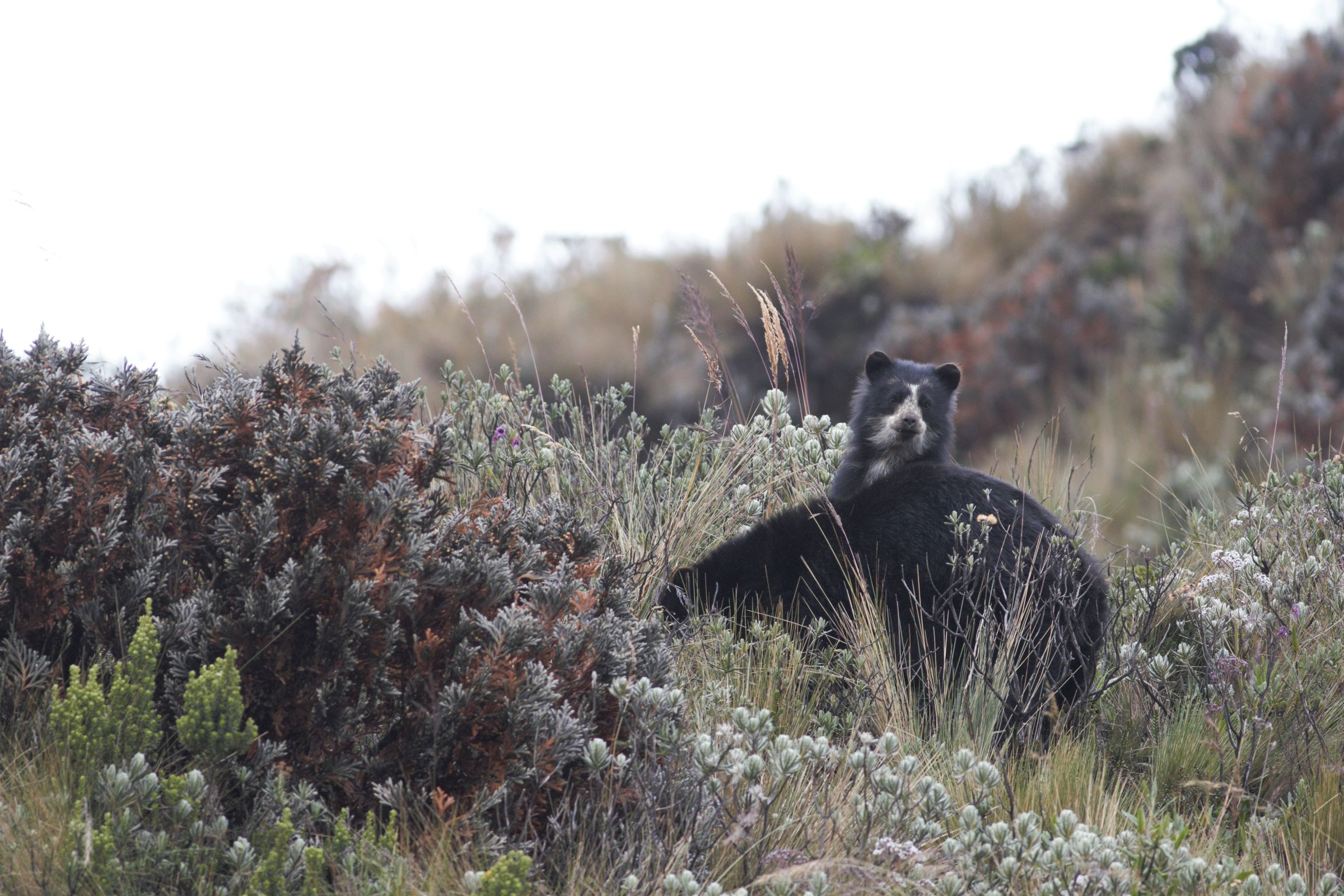 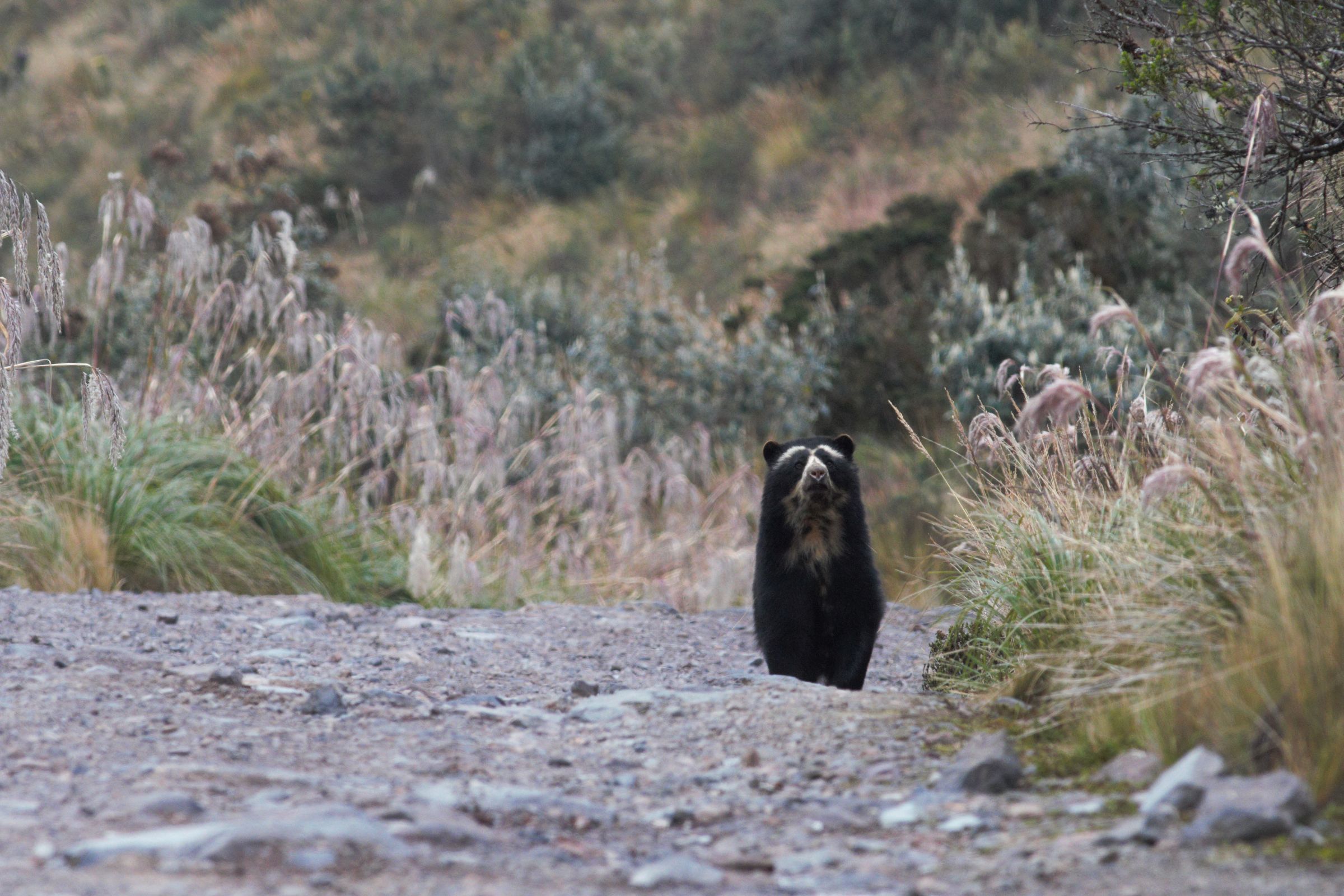 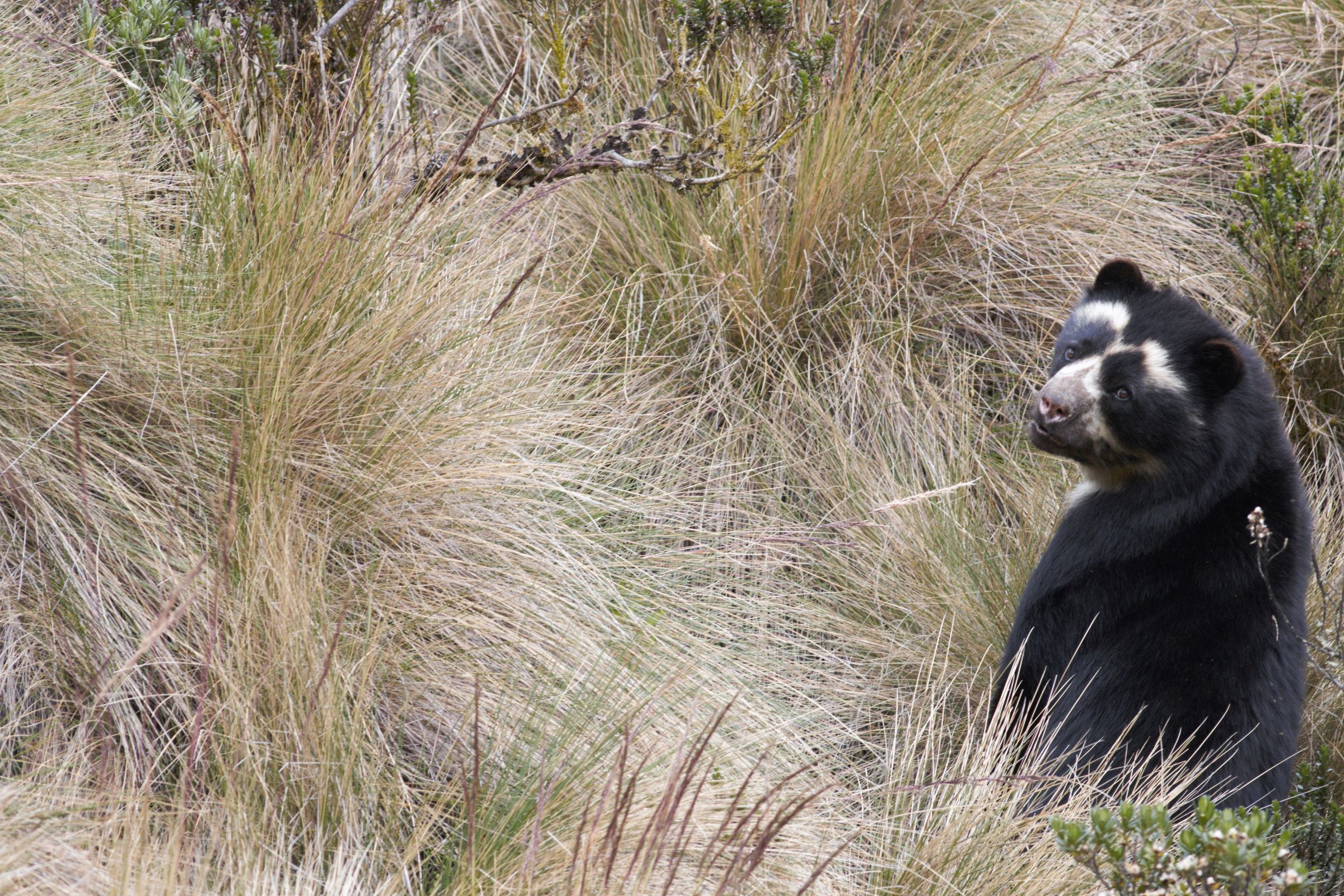 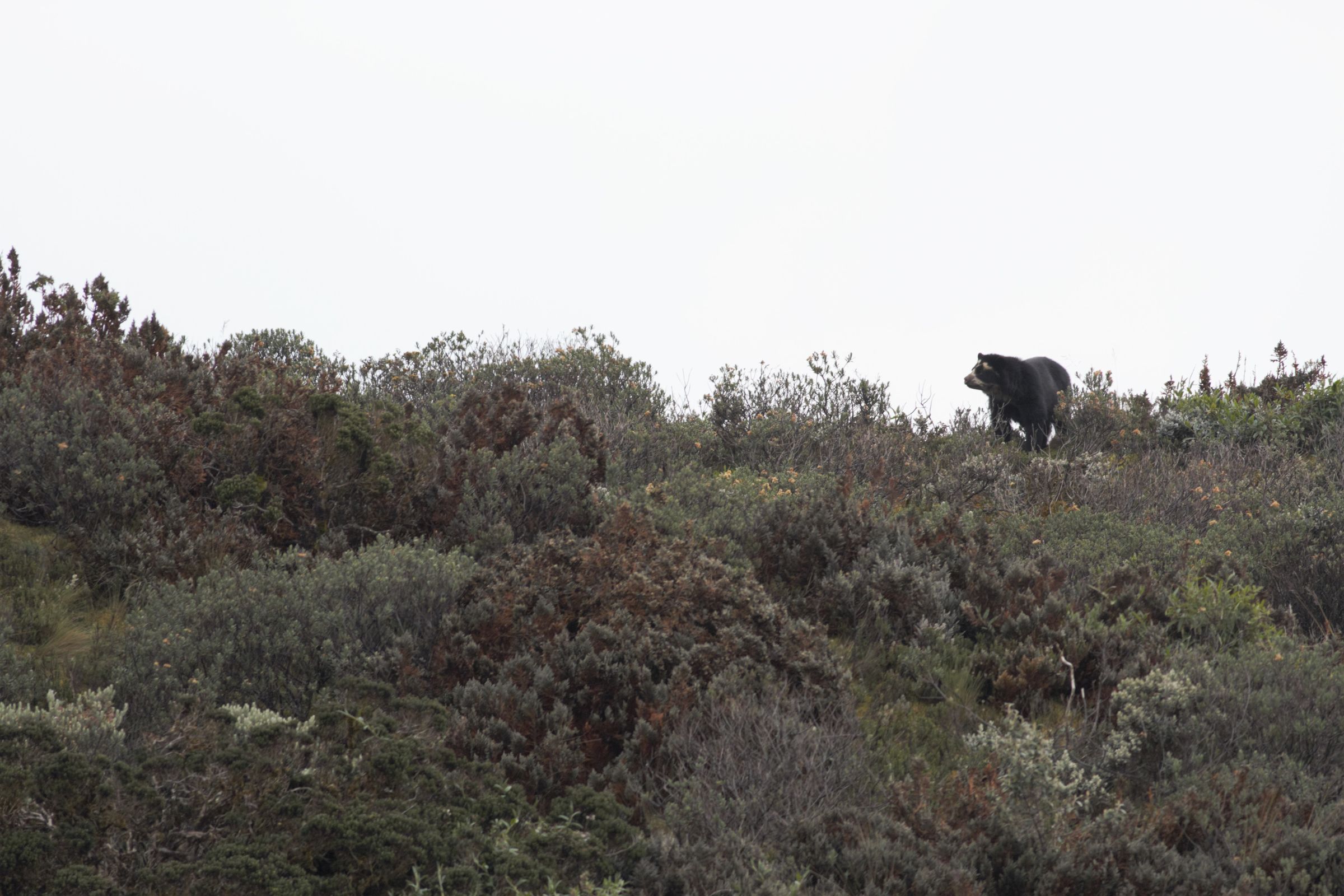 A total of eight different individuals

The next day we also score three bears: The same adult bear on the same place as the day before as well as two adult bears in the National Park of Cayembe Coca. Days three and four in Cayembe Coca, however, the bears elude us. The park itself is breathtakingly beautiful. During our second visit to the region the bears obliged us again. We saw another she bear with a cub as well as another adult, although it is slightly smaller in stature. It must be added that the weather gods were kind to us. Two different groups prior to our visit did not see a single bear or tapir over a period of 5 days. 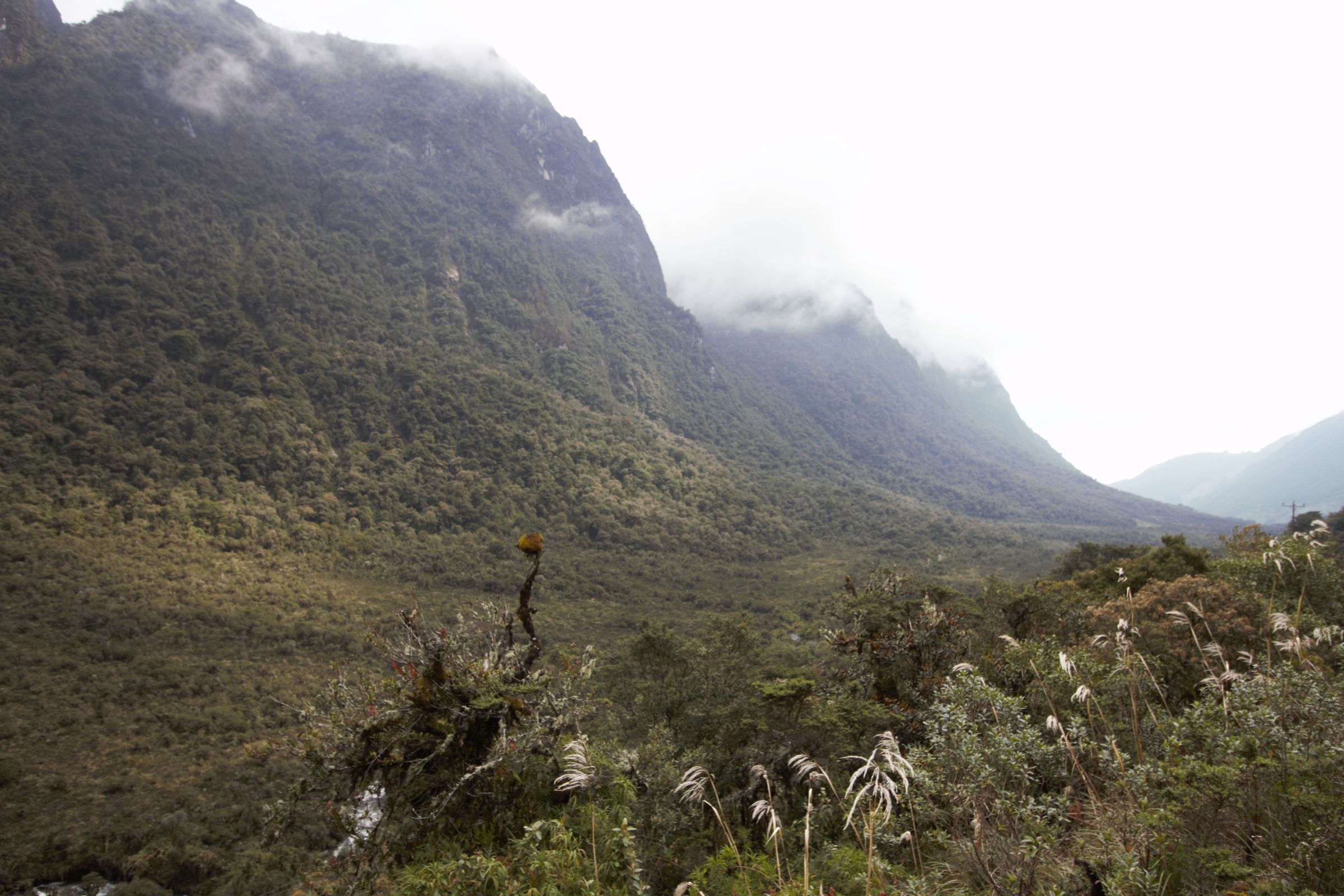 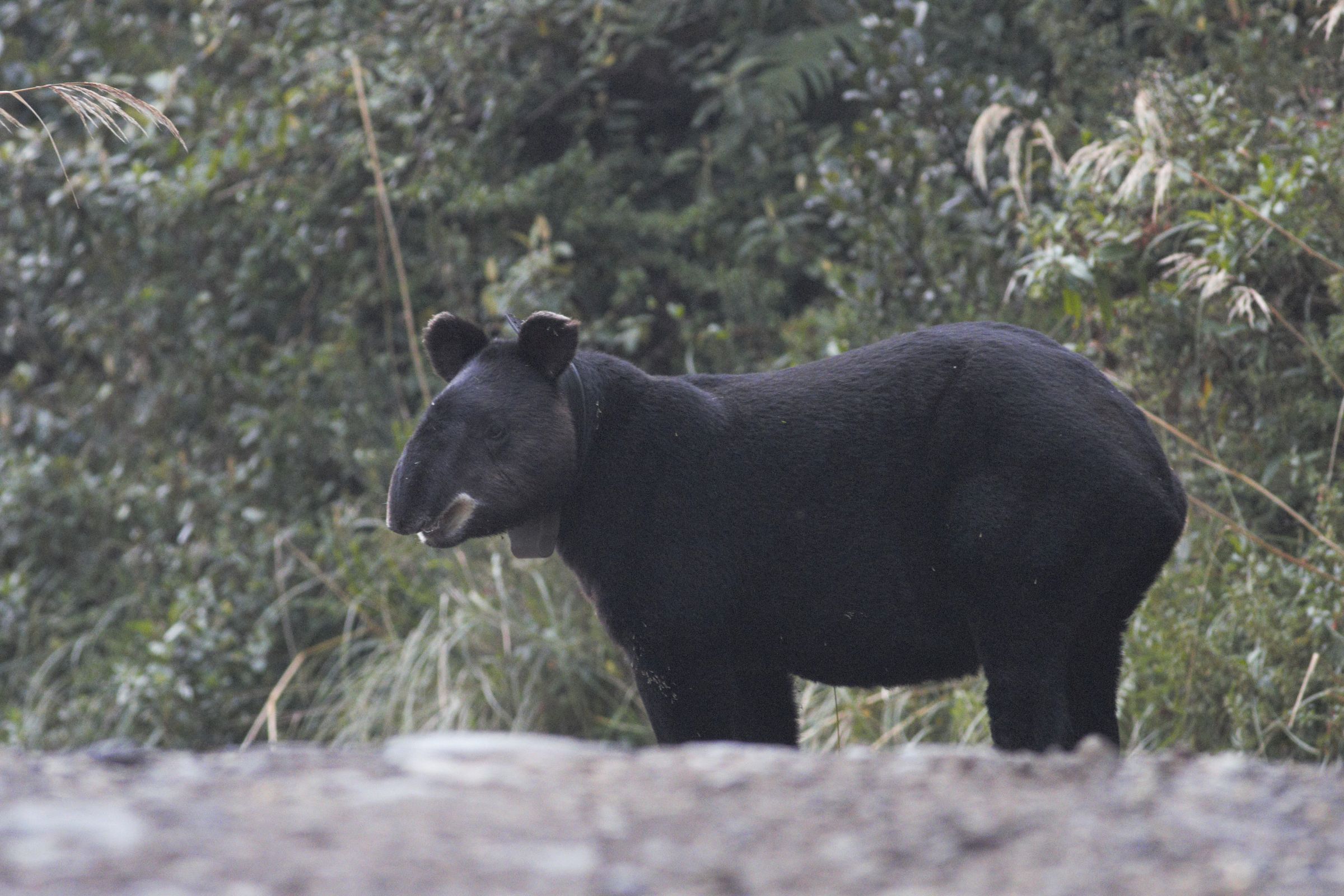 Our searches found three different Mountain Tapirs. However, the animals we did see had all been fitted with a radio transmitter. Personally a huge dissapointment when after so many attempts you discover the animals with a behemoth of a transmitter around their neck. A first encounter with  an *umbrella species like Mountain Tapir wearing such a radio collar takes away the wild factor completely! Just horrible to see in my opinion.

One wonders why that, in a setting like this, it is necessary. For science? The most important thing is that the biotope here is still intact and extensive. Everything else is secondary; whatever science may think! Leave the animals alone! Having said that, however, I think it would help that if the tapirs are being radio collared for a specific study it should be made public as to just what is being studed, why, and for how long and what are the planned for conservation benefits to the species following the conclusion of the study.

An ultimate thanks to my good fellow Ronan Felix for making this prospect tour possible!

*Umbrella species are species selected for making conservation-related decisions, typically because protecting these species indirectly protects the many other species that make up the ecological community of its habitat (the umbrella effect).